It’s appropriate to begin a discussion on the hero’s journey by quoting the man we now equate with modern understanding of mythology. Joseph Campbell theorized: “all myths are the creative products of the human psyche, that artists are a culture’s mythmakers, and that mythologies are creative manifestations of humankind’s universal need to explain psychological, social, cosmological, and spiritual realities (Joseph Campbell Foundation).”

As a writer, I’m a mythmaker. My private dreams are the stories I want to tell, but I believe that if I can map my story to public mythology, those stories will resonate with readers. I believe that the hero’s journey (coupled with quality writing) is the difference between a mediocre book and a best-seller.

At its most basic explanation, the hero’s journey is a pattern of public dreams that Campbell recognized in myths across multiple cultures. In “Hero With a Thousand Faces,” he writes:

“A hero ventures forth from the world of common day into a region of supernatural wonder: fabulous forces are there encountered and a decisive victory is won: the hero comes back from this mysterious adventure with the power to bestow boons on his fellow man.”

In 2011, I attended a retreat at the Franciscan Spirituality Center in LaCrosse, WI called, “Awakening the Soul of the Writer.” While the hero’s journey sounds perfect for fantasy or paranormal genres, what that retreat taught me is that we are all everyday heroes. The workshop leaders revealed at the end of our five day retreat that they intentionally led us on the hero’s journey. It was transformative.

The hero’s journey fits any genre, even memoir. But I struggled with matching up the cycle to my progressing novel, “Miracle of Ducks.” Every chart I could find was an arc, linear or a circle. This is the one I studied at the retreat (note that the graph is popular online and cited as public domain):

While it helped me understand how to shape my story, it didn’t help me understand my story’s shape on the page–or 400 of them. Then, in 2012 I quit my career, downsized my possessions and moved in with my eldest daughter and her husband. I was going to finish that novel and live where it was set in Bayfield, WI. As it happened, another writer’s workshop was offered on Madeline Island, across the bay from where I was writing. That’s where I met Mary Carroll Moore and her storyboard.

While trying to make sense of the “W”  storyboard that Moore implements to develop a book, I realized that it was a navigable map to the hero’s journey. In fact, Moore teaches in her workshops and book, “Your Book Starts Here,” that the most successful books and films are those that use the ancient three act structure. Furthermore, the three act structure can be adapted to Joseph Campbell’s hero’s journey.

Bingo! This was the storyboard for me!

So, keeping that diagram in mind up above, let’s look at my storyboard in its bare-bones stage:

Moore says that you can use poster board or even tape together multiple (6) pages as I did on Madeline Island: 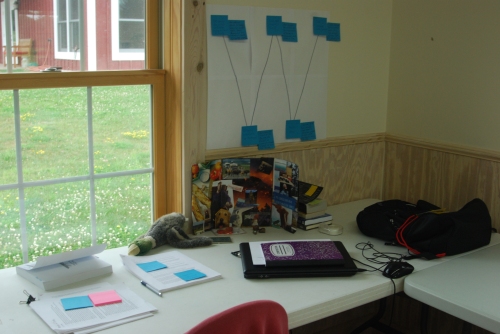 The idea is to map your book according to three acts and the most significant scenes. We’ll discuss the three act arc more thoroughly in a few weeks. The most significant scenes correlate to the hero’s journey. They are represented on my permanent board as five circles or on my temporary board as blue sticky notes (there are two sticky notes to each circle which represents inner story and outer story which we’ll address with the three act arc).

Each circle, in order from left top, to bottom left, to middle, to right bottom to right top represents the hero’s journey:

Do you better see the map on the W versus the circle? It gets even clearer as we then write scene by scene and place those scenes on the board. And that, will be for next week: Writing a Novel Scene by Scene. Here’s my significant scenes from “Miracle of Ducks”:

A closeup of the opening scene:

As a writer, you are on the hero’s journey. Let me leave you with this final thought from Campbell: