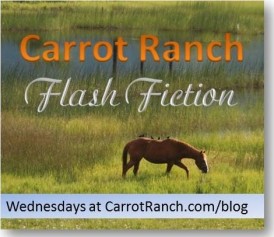 Working out like Rocky Balboa in the gym is the pinnacle of an underdog getting stronger and achieving a goal. Rocky’s theme song makes us want to do jumping jacks. But for what purpose? Not all stories of getting stronger are about the physical body.

In fact, not a single flash fiction in this compilation addresses physical fitness. A greater theme might be seen in the power of the mind to overcome fear or circumstances. And creative interpretation opens the door to ideas of getting stronger, such as that of an odor.

Mary held the bunch tight, unable to move. That aroma; it couldn’t be her father’s aftershave. She sniffed the flowers; not them. ‘Can you smell anything?’

‘Because he’s here, Mum.’ The girl took the flowers from her mother.

Mary straightened up. He hadn’t left her. He’d always be here, if she needed advice. Thank heavens, she had let Penny bring her.

‘Thanks, Dad,’ she whispered.

Behind a cloud, Peter watched Milton spear another can with his horn. He loved Old Spice.

Rebecca is lying with water trickling down her eyes as she hears her infant’s cry from the other room. His tone makes her heart ache as he is hungry, but her body refuses to get up.

Her mind and body are battling an agony and her tears are a proof that a mother wants to be near her little one.

Days are rolling by, and she continues to pop in the pills with the hope. Her tenacity and perseverance have finally led her to lift her ailing body and take slow and steady steps to see that precious smile.

Getting Stronger by Irene A Waters

The barrow slowed and stopped. Now was his chance. He could hear his mother calling so mustering his reserves to escape and with all the strength he gathered he gave a king kick to the groin “Take that you bastard.” The unicorn suddenly appeared by his side as the darkness turned to light.

His mother entered the room in response to the shouting.

“I thought I was going to die” Jack said

“Luckily we have two lives – our awake life and the life we have in our dreams.” She hugged him tight.

Ready to Ride by Charli Mills

Hickok stood holding the reins of an unsaddled roan. He watched what looked like a barn-fly bobbing on the prairie horizon until it waxed into a frothing mount and rider. Hickok flexed his gloveless hands. If the Pony ever paid him he’d buy a beaded pair with fringed gauntlets. His roan nickered at the approaching relay, anticipating the mail saddle that would soon pass to his back. Every morning when Sarah gathered eggs by the corral, Hickok galloped the roan through several maneuvers. Today he’d get the chance to show her he was more than a pretty stock tender.

The Warning by Sherri Matthews

It didn’t take long for the rumours to spread like wildfire around the office.

“Did you hear the news?” gushed Christie as she ran over to Jan’s desk. “Mr. Chapman is leaving! He got the sack!”

Jan stopped typing and kept her gaze steady as she looked up at her. “Really? That’s a shocker!”

Christie dashed off to spread the news, leaving Jan stunned in thought. No more Mr. Chapman, no more grabbing behind closed doors. She had warned him enough times but he hadn’t believed her.

Turning back to her keyboard, Jan smiled broadly as she began typing.

Getting Stronger by Anne Goodwin

The governor granted his permission, but nothing more. No budget. No staff. When she saw the wasteland he’d assigned her, she almost gave up. Brambles thick as trees. Boulders too heavy for a sole woman to lift.

The prisoners skulked in their cells, smoking. The screws laughed when they unlocked the door to let her out. Laughed when they let her in again, exhausted, caked in mud. Laughed when the slugs gobbled up her seedlings. Yet she and her plants were growing stronger. She smiled. Once she’d harvested the cannabis, there’d be a waiting list for the gardening class.

A Ladder Away by Amber Prince

He glanced up at the towering line of steps and gulped. His dad always climbed it with ease and now stood atop of their roof probably doing amazing things. Billy wasn’t sure what was done up there because he had never made it to the top. He never made it past the fifth step without fear gripping his body and having to climb back down with sweat slicked palms.

Today he wore gloves. Billy took a deep breath heeding his dad’s advice, “Never look down.” One step. Two… seven… finally victory was his as he patted his dad’s shoulder.

I used to cry myself to sleep at night, only to be haunted still by Old Father Martin’s dull eyes in my dreams. But one morning in class it changed, and when he gripped the yardstick I stood stock-still, my lips curling into a smile.

I didn’t even blink. And I felt my resolve strengthening when Old Father Martin yanked me to his desk. His calloused hands tore at my wrist as he spoke in that disgusting, spit-clucking way, cursing and trembling with each whack of the stick. And with each whack I laughed a little harder…

Timid. Needed help getting things out of bag to put in drawer. Sat towards back of group. Drew knees up under chin. Hunched over. Sucked thumb. Twisted long tangled hair under nose. Rocked.

Initiated conversation!! Hair combed!! Nose not running!! Brought toy for show and tell. Responded with one- or two-word answers. Small, dirty, pink unicorn. B laughed. Erupted, but went to desk, not under!

The Speech by Larry LaForge

Edward’s knees wobbled as he stood facing his classmates – and his lifelong fear. His throat was dry; his heart pounded.

He swallowed hard, feeling sick to his stomach. All his preparation seemed for naught.

Edward anticipated ridicule and harsh judgment if he excused himself yet again.

Nearing panic, a strange and wonderful calmness suddenly enveloped him, as though a great burden had been lifted.

This was the moment Edward finally accepted himself.

The words he prepared came out, although his presentation was well below the class standard. Edward realized that didn’t matter.

(A 100-word version of the above story is posted at LarryLaForge100Words on Flash Fiction Magazine:
http://flashfictionmagazine.com/larrylaforge100words/2014/06/23/the-speech/.)

Jean could hardly believe it. Her B.A. had almost finished itself in four years. No muss, no fuss – a change of major and a divorce notwithstanding. Commencement and a diploma capped it off.

Her M.A., though – 15 years, four changes of programs, and life in between – including remarriage and two children. For reasons that would puzzle her later, she did not plan to attend this degree’s ceremony.

After all the effort – exams, classes, graduation reading, “starred” papers. The last paper – finally turned in.

With her one-year-old snoozing in the backpack, Jean strolled through the art exhibit. Graduation day, indeed.

Teetering On the Rocks by Sarah Brentyn

He heard the clinking. It was a sound he knew well. His stomach tightened, heart raced. Consciously taking a deep breath, another, he walked into the kitchen where his wife was mixing a martini.

She held it out to him and winked. “It’s strong.” He cringed. “I can make a rum and coke. Or a gin and tonic,” she offered.

“That’s okay.” Shaking, he reached for the glass. The mouth-watering alcohol smell reached his nose. He flashed back to the bar two weeks ago. The family barbeque in June. Last night.

Walking to the sink, he dumped the glass.

She picked up the book and read, ’there’s more power in the mind than in the body’.

She began her hand exercises proceeding to the leg exercises and finally concluding with the breathing exercises taught by her yoga teacher.

Maryann touched the metal body and a chill went down her spine.

MaryAnn was six feet away from her bed and on her feet standing upright albeit the aid of the walker.

MaryAnn had ‘travelled’ this distance after a month’s stay in the hospital after the accident.