Hi. My name is Charli. And I like to hang out in cemeteries.

It sounds like the opening to some Anonymous Group I should belong to, but the truth is I don’t want to quit. For me, it’s about history and discovery. Reading a cemetery is like reading an historical record of a family or community.

I’ve stood in family graveyards where blood of my blood is buried, feeling a strange connection to people long dead before I was ever born. I’ve been to high-desert ghost towns in Nevada, marveling over the marble monuments to those who dared to seek fortunes in remote places. The Radio Geek, now living on the upper peninsula of Michigan, posts photos of old cemeteries to lure me in to visiting.

When I lived in Minnesota, I researched the Hub’s New England family who helped settle the Midwest. I was able to locate the unmarked graves of children lost to the Mills family during times of sickness, Civil War and the Dakota Uprising. Through years of research, I finally found the resting place for a Mills black sheep, reuniting a lost line.

As if my own family research wasn’t enough, I found other excuses to haunt cemeteries. I recorded the names of “lost wives;” the young women who died in childbirth in Dakota County before the 1900s. I looked up the history of every family buried in an old Irish-settlers cemetery near my suburban home.

At my height of cemetery-obsession, I volunteered to do grave look-ups for an organization called, Random Acts of Genealogical Kindness. My kids often went with me, and they still tease me about trying to find abandoned cemeteries by locating “cemetery trees.” It’s true; I can spot an old cemetery a mile away.

Earlier this month I got to kneel at Cob’s grave. After Hickok shot him, James Gordon and James Woods, Cob was buried unceremoniously in a common pine box with Woods on the hill behind Rock Creek Station. When the railroad cut a track through the hill, their box was relocated to the Fairbury Cemetery. I wrote about my impression of finding Mary’s grave next to Cob’s over on Elmira Pond Spotter.

Sometimes, creepy and unexplained things have happen when I’ve been researching cemeteries. Since Halloween is next week, I thought I’d share with you a creepy photograph.

This is from the Fairbury Cemetery, looking west from Cob McCanles’s grave. I didn’t notice anything odd while we were there, but these green lights appeared when I was scanning my photos on my SLR Nikon D80. Creepy, but I figured it was just a sun flare or reflection since I was shooting at the sunset through the trees and markers. But it only got creepier when I enlarged the photo. 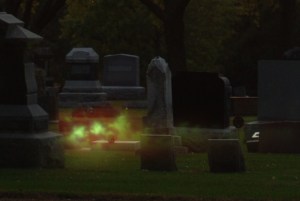 I dare you to click on the photo. Full-sized, you’ll see it’s a luminous green fog. What the heck? It reminds me of ectoplasm from Ghostbusters! Pretty creepy and not at all why I hang out in cemeteries.

So I returned to collecting historical data. The next day, we stopped at the Fairbury Cemetery on the way to Rock Creek Station, and I took photographs of the graves near the green fog. Here are a few ghostly suspects and bare-bones data that I found in Census records:

Christiana Sigsworth and Henry Beal. A ship’s log for the Hindao records that Henry, a carpenter by trade, left Southampton, England 24 Jun 1876, bound for Nebraska. Immigration records show that Henry arrived earlier in 1871 and Christiana in 1873, the same year they married. Both were from England and are recorded as living in Fairbury by 1880. Nothing unusual other than Christiana was seven years older than Henry, and that she was 43 years old when they married. She had her two sons prior to Mr. Beal. In 1880 one son is living with them and his last name is Beal. The name Sigsworth on the gravestone did not turn up a single clue. Ghostly or otherwise. 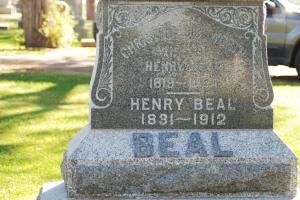 Only a few tantalizing hints from the Beals–her headstone reads, “Mother” and his simply reads, “H.B.” Her name is etched in granite as Sigsworth. Was that her previous married name or maiden name? Why list is at all? Other than the 1880 Census, I can find no trace of Mrs. Beal’s sons, yet  in 1900 she claims two have had two births and two living children. Is that enough to be a source of unrest that manifests as green fog? Who knows!

By now you know I’ll be wanting creepy stories from you this week.

October 22, 2014 prompt: In 99 words (no more, no less) write a creepy story. It can be prompted by the green fog in the photo, an imaginative idea about the Beals or take place in a cemetery. If other creepy ideas take hold, go for it! We’ll all shudder and be in the mood for Halloween–or grateful for its passing.

Respond by October 28 to be included in the weekly compilation.

Sarah pushed open the heavy wooden door of the cabin. Behind her the baby wailed and Mary snarled, “I hope the Pawnees scalp you!”

Tears flowed and she twisted her ankle in the deep wagon ruts of the hard packed road. She followed a slight trail through the tall grass turned autumn red. It ended at the two graves marked only by letterless river rocks. Sarah sat by Billy’s grave and cried. Not for Billy, the orphan from North Carolina who only lived two weeks in this Nebraska hell.

Mary wanted her dead and Cob fiddled across the creek. 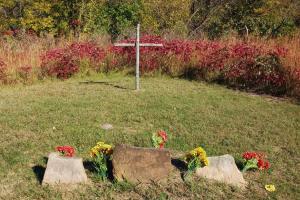 The Unmarked Graves of Rock Creek