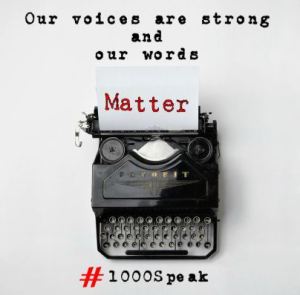 Who knows where imaginary friends come from, but I knew the imaginary realm to where I went. Occasionally a frog would follow me home and all the adults whispered concern as I cradled this imaginary friend in the palm of my hand.

My father’s father took charge of the situation, scooped the frog from my hand, threw it on the ground and stomped it with his cowboy boot. He was a bully but, I had no idea what that meant. Most times he was nice and funny, giving me horses to ride and silver dollars after he made me cry.

In school I connected with other friends who had great capacity to imagine. We ran like wild horse herds on the playground. We pretended we were horses. We found a rock named Gillian and he was the king of a mountain stream. We played Barbies outside.

The older girls in my small town lacked imagination, or at least found it foolish. I learned to not let those into my realm. But I had nothing to say to their bullying that increased each school year. When I cried because I was afraid to go on the school bus my mother told me to smile more, that I cried too much.

Summer between 4th and 5th grade was misery. The older girls were bored and cruel. One gave me a glass of lemonade that wasn’t. A new family moved to town and the older girls convinced the tough new-comer, Monica from Chicago, that I called her little brother a nasty name.

Monica tackled me like a linebacker. I had no idea why at the time, and I cried as she pounded me. She stopped. “Why don’t you fight back,” she asked. I never fought back. I had imagination, but I had no voice.

From that day on she was my protector. She taught me to fight, to stand up to the older girls and I taught her how to ride horses. We were inseparable until she moved two years later. By then I was going into 7th grade. Most of the older girls were away at high school and Monica left me with a gift – my own voice.

My teacher gave me a second gift. He recognized the imagination in my spelling stories and encouraged me to write my stories longer. Each week I averaged five pages. Then my teacher started to read them aloud. They were popular. Next, he asked me to read them aloud.

That’s when the power of voice and imagination hit me. I wanted to write novels, though I had no clue how. I outlined one in a notebook that I still have and I honor that first attempt. In high school I joined forensics (not the criminal kind, the speech and debate team). My voice grew strong.

Throughout my education and career, I’ve used my voice. I’ve presented on how food growing impacts climate change for an early symposium on the topic; and I’ve traveled to New York City to present on the topic of story-telling to marketers. In NYC, I promised myself that one day I’d return as a published author.

Although it was a frightening step, after I raised three children, I resigned from the nine-to-five career world and moved west to write stories. I had my voice and my imagination tucked in my saddlebags. What I longed for were those early friends who would run around on the playground with me, pretending to be horses.

To build up from bullies is to find our voice. At Carrot Ranch, we practice our vocal cords by writing 99-word flash fictions weekly. We give voice to ideas and we discuss what we read. Each voice is unique and offers a variety of insights, ideas and imagination.

In preparation for the #1000Speak compassion blog event on March 20, writers at Carrot Ranch contributed to the “Building from Bullies” theme by responding to a prompt about how the bully mentality can be countered with a different, unexpected or kind action.

Read these powerful voices here: Circling the Bullies. And remember to write out…speak out…laugh out loud…because your voice matters, too! Use it to do good. Use it to build up. Give the gift.