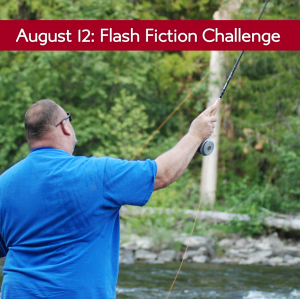 His back is to me as he casts his flies. Hoppers or nymphs. He’d know; he discerns to the insect hatch. I observe not to plop a reading seat on an ant hill or encounter anything crawling across stones in the creek.

He’s Sgt. Mills, ex-Army Ranger and I’m the buckaroo writer he teasingly calls the Cowardly Cowgirl. He tosses a live grasshopper at my open Kindle and I squeal. He laughs and asks how I’d ever survive in the wilderness. I’d manage. After all, I’m a survivor.

We each have our own kind of toughness. He has physical, mental and moral strength; not someone to be broken. If you’ve ever watched a special forces movie with the proverbial ring-the-bell-to-quit element, know that Ranger Mills never rung the bell. The Army pushed him until it proved he was a soldier with no quit in him. He never quits.

In my wilderness, I know what it is to quit and be broken. My toughness comes from fighting back. There are some bells I’ve never rung — I escaped a family dynamic few ever do. I know to be hopeful, to persevere and to believe in a greater good. I’ve learned that quality of life is worth fighting for and that  every individual has a right to his or her full potential. I am empowered.

We both have Post Traumatic Stress Disorder (PTSD). The gift of surviving; the mechanism itself that allows one to survive.

I’ll advocate for others with PTSD, and even share snippets of my story, but frankly I’m not a fan of labels. While diagnosis can offer insight, I don’t ever want it to be an excuse. When I was first diagnosed 24 years ago, it explained so much. I had a great team of therapists who loaded up my toolbox with ways to cope — emotional reprogramming, art therapy, parenting classes, group therapy. Recently I learned of the Human Givens approach in the UK and although that wasn’t my course of therapy I found several similarities. It starts with awareness.

Yet it I’d be unaware for years about my husband’s PTSD. It wasn’t until a mutual military friend asked for my help with her volunteer service to the Army psych unit at Fort Snelling (in St. Paul, Minnesota). She was using auricular acupuncture in a study to reduce combat stress. I did intake and brought rocks (that’s for another story, one day). Slowly, I began to see patterns in these soldiers that I recognized in my own Ranger Mills. She wasn’t the first person to point to him and PTSD.

I met my best friend Kate the first day of college. We were both writing majors and OTAs– older than average students. Our adviser was a no-show and from day one we looked out for each other. Our bond was instantaneous, but it took the normal paths of trust and disclosure to learn that we both had been diagnosed with PTSD two years earlier. She was married to a combat veteran who was irresponsibly put on medication and pulled off without thought to consequences. In a PTSD fugue state (where he’d wake up in the middle of the night reenacting scenes from Vietnam), he shot himself.

These are hard topics to share; hard for discourse. Many people squirm and change the subject. Yet Kate and I found in each other a friendship that had at its core an understanding of the brain’s survival mechanism. We could discuss symptoms, therapies, studies and stories without censure and feel a peace at knowing what each of us had gone through was familiar.

Kate never came out and said that my husband had PTSD, but she cleverly included him in key conversations over the years that planted a seed in my head. Even after my other friend suggested that my husband reach out to the VA, I never disclosed my thinking to Kate until she was on her deathbed.  She nodded. She knew. And that’s when she gave me the second best piece of deathbed advice: “Charli, you go home and tell him, you have his back.”

When in the heat of combat, when my husband jumped into Grenada with 110 pounds in his rucksack and landed with his parachute looking like Swiss cheese from bullet holes, all he fought for was the brother next to him. Not flag and country, not God and humanity, but for the soldier in the same firefight as he. 110 pounds was nothing. He’d easily carry a 175 pound Ranger because not only do they not quit, they don’t leave anyone behind.

I came home from Helena and told Ranger Mills I had his back. He teared up, nodded and choked out a “Thank you.”

His PTSD is unlike mine in a few significant ways. First, I developed PTSD as a child which impaired personality development. He went into the Army mostly developed (18 is young for the male mind which some scientists suggest isn’t completely hardwired until the early 20s). Second, I’ve had a formal diagnosis and therapy. His diagnosis happens tomorrow at a hearing and he hasn’t once been examined by a qualified (or unqualified for that matter) professional. Typically, the VA assigns a diagnosis upon proof of combat service.

I have his back tomorrow. And I know I’m preparing for a fight because I’m going to push against the grain. I don’t believe that Ranger Mills has PTSD from a single point of conflict — the invasion of Grenada. I believe he already had PTSD before he jumped. I believe the Army Ranger School actually triggers the PTSD response and then qualifies those who can use it to become soldiers who don’t quit. Hyper-vigilance and hyper-arousal, both symptoms of PTSD, are also traits of the elite soldiers.

The Army trained its Rangers “live” between Vietnam and Desert Storm in conflicts we never heard about in South America. Panama, Nicaragua, the Rangers were essentially the CIAs backup army, but shh, I never told you that. Neither has my husband. He’s loyal to the creed. I found out through a Catholic group (in college) who protested the School of Americas and had stories from nuns and priests in South America that never hit the news. What it does explain is his sustained exposure to PTSD triggering events. Ones the military will never grant him officially. But he has Grenada to count. Officially.

My next fight is against medication. Not once was I medicated until I voluntarily joined a PTSD drug study in the late 1990s. I had already been through my therapy and in control of my triggers for several years when I saw an ad for the study. Thinking I was going to help others, I went through a series of discomforting sessions until I received my second diagnosis of PTSD. Then they gave me pills. I wish I recall what they were; but I know they triggered symptoms I couldn’t control. I quit the meds immediately and the symptoms abated. I told the researchers what happened and it became a footnote in side-effect warnings.

Because of my experience, I don’t believe in medication as a way to cope with PTSD. Already, I think our culture is too quick to believe in the pill-that-solves-all. I’m not saying that drug therapy doesn’t have its place, but it should be either an emergency intervention to stabilize a person or the last tool in the box after trying other non-invasive therapies. In fact, the Journal of Psychiatric Practice posted a review to NOT recommend anxiety medication for PTSD. Had Kate’s husband not been medicated (he had lived with PTSD for over 20 years prior to being medicated), he might have lived to be the one at her side while she battled cancer.

According to the VA, 22 veterans commit suicide each day. This means approximately 8,030 veterans kill themselves every year, more than 5,540 of whom are 50 or older.

Ranger Mills is 52. Tomorrow he gets his diagnosis. I will fight for him to get the best in the VA’s toolbox that doesn’t include medication first. I wonder how many of those veterans who died were offered nothing more than a prescription? They trained this Ranger never to quit. They can train this Ranger to know how to stand down his hyper-vigilance and hyper-arousal. They can train him to manage his anger, to allow that civilians do things differently. They can help him with job-training or help him start a business, stand up for him when employers are unfair (his current employer pulled his route from him because he has this appointment tomorrow). I’ll help him communicate tomorrow; I’ll help him with future therapy; I’ll help him understand that PTSD is not a label or stigma.

I have his back.

August 12, 2015 prompt: In 99 words (no more, no less) write a story about a character who is called to have the back of another. What circumstances led up to this moment? What are the character motives? Think about the interaction, the setting, the tone. What does it look like to have another’s back?

He’d hid the kittens Mr. Boots had in the barn. On those nights when coyotes yipped and she felt abandoned on the prairie, Hickok read to her his mother’s letters. Last night, after Cob raged that he’d clean out Rock Creek, Hickok calmed her fear. “I got your back, Sarah,” he said.

Now that Cob had thrown Wellman to the ground, Nancy Jane growled by the door and young Sally whimpered from under the kitchen table. Hickok strode tall and calm from the barn, walked right past Cob.