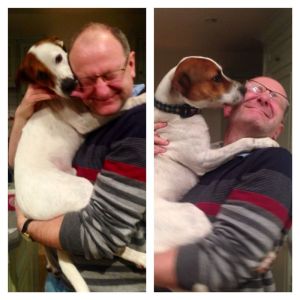 Little did I know that when I slung the “ranch open” sign on a literary project called Carrot Ranch Flash Fiction Challenge that I would find some of the best writers in the world. As a Rough Writer, Geoff Le Pard has been one of the most prolific flash fiction contributors, writing an entire saga week by week, 99-words at a time. His dedication and enthusiasm for craft is inspiring! He’s the author of two novels, and joins us today to discuss the importance of beta readers to his second novel, “My Father and Other Liars.”

My beta readers have been critical to me: how did I find them and chose them and what does having informed and knowledgeable beta readers mean to me?

I learnt early that no book can be created in isolation. It needs to be read and read by people who haven’t lived, eaten and breathed it for months, years maybe. Even writing for yourself, you will not spot what doesn’t work, you will misdirect yourself over plot errors, character inconsistencies and unbelievable story lines. It is easier to suspend one’s own belief than have others do it for you.

That’s where Beta readers come in. And they are gold dust.

Let’s just get a definition out the way. Beta readers don’t edit. Sure they may spot typos, may be grammar nerds, may be brilliant at spotting clunky dialogue, fantastic at picking up continuity errors but, for me, this isn’t why you use them.

For me they do two things.

Firstly they replicate your final reader. They are the one time reader who needs to be drawn in, wants to turn the page and see the story with the clarity of a committed reader. Therefore asking someone who is a fantasy nut to read a piece of kitchen sink human drama is rather pointless. Clearly countless people read widely but they aren’t always available. Just be a bit careful who you choose because you want someone who has the chance to be engaged in your story.
What you want is an honest appraisal. And that is difficult to give. People don’t want to offend. We read about a number of people who say they won’t post a review for an Indie author if it’s less than 4 stars. Which is fine and grand but would be useless in a Beta reader. For me at least. If it’s two stars I need to be told.

The people who can eviscerate my novel are perfect for me. Sure I don’t want gratuitous criticism but if it’s pointing out a failing I’m not that concerned if it’s wrapped up in brown paper or in nice jolly wrapping paper or unwrapped. I have between four and six people I’ve learnt to trust but with every book I try and involve someone new. You never know. And those who give it a try, often not sure if they’ll be any good, turn out to be excellent.

Because My Father and Other Liars has taken about five years to reach this point, it’s probably been read by upwards of ten people. Of those, four have given it a nod and nothing much more and the rest have done me the biggest favour someone can do a writer; they’ve given their work detailed attention and spent time articulating what they thought about it.

The second use for me, is the specialist reader. With My Father and Other Liars I have really needed expert help.

As I explained over at Annecdotal, there is a lot of science – and especially genetics, life sciences and biology – that underpin this book. I gave up biology in the second year, year 8 at school. When my children had biology homework I nodded in another’s direction. It was beyond me. But I researched and checked and read and listened and I thought I had it pretty clear. But still… Then the Vet mentioned one of her friends who was just finishing her Biology degree at Oxford. ‘Would she…?’ I wondered. Yes she would. Indeed a second Biology grad asked to read it. Between them I had several lectures, a deeper understanding and a much better book.

The second area, which I discussed over at The Daily Echo, was the subject of locations. I moved my story around, crossing the Atlantic. Washington, London, New York, Surrey, San Francisco and Northampton. I’ve been to these places, I’ve developed a sense of what they are like. I feel I can describe them with a degree of accuracy. But two locations caused me some trouble because in one case, I’ve not been and in a second I made the place up and stuck it in the back of beyond in Oklahoma!

Nicaragua was the first of these. It’s a Central American country and I used a real city, Leon. If people have been they may have questions for me that I may well not be able to answer. I’ve researched all I can; my son and his girlfriend visited and gave me great feedback, but at the end of the day it may sadly fall short. I hope not. People who have read the book and have a sense for Central America feel it passes muster but still I worry. A Nicaraguan beta reader would be marvellous (I still have one possibility, but that would be for the second edition!) You may ask ‘Why not change the story?’ ‘Take it somewhere you know about.’ Sadly the story demands a Central or South American setting and Nicaragua was perfect.

Sometimes you do your best and then hope some!

The second location and one I feared for most was the fictional town of Beaumont in Oklahoma. My fictitious Church needed a fictitious home and it needed to be remote, and in the Bible belt states in the US. On a metaphorical toss of the coin I came up with Oklahoma. I read about the state, I did all the usual Google earth stuff but still. I placed it close to the Panhandle and wrote away.

Months, nay years later and I’m asking for some beta readers. To my American friends I asked if anyone knew anyone who lived or had lived in Oklahoma. Charli, my host today pings back. Her fellow in-law – her daughter’s husband’s mother – hails from Oklahoma. Better still she grew up in a strict Baptist environment. Better than that she wanted to be a Beta reader. Joy and double somersaults all round. Paula not only gave me a sense of place but she pointed out timing fallacies, errors in how the local airports work in practice, the ubiquity of the red dirt and the language ticks as well as lots of good stuff around food that added nice little touches to the narrative.

There. The benefit of blogging to a writer in a nutshell. I’d never have found Paula Moyer without blogging, never have got the introduction. My Father and Other Liars is a tale that romps hither and yon; its pace defines it. Yet if something like the location descriptions, just as much as the language of the characters, jars with any of the audience, it’s like driving with the hand brake on. Possible but deeply unsatisfying.

I’m deeply grateful to each and every reader. Some gave me a few sentences but each of those are like rivers of nectar from the gods. Those who sent me pages of thoughts, or a manuscript dotted with tracked changes and comments, I’m both touched and emotional at the thought of the effort involved. You all are part of this project, every one of you. Thank you.

My Father and Other Liars is the second book by Geoff Le Pard. Published in August it is available as an ebook and paperback here:

His first book, Dead Flies and Sherry Trifle can be found here:

Geoff Le Pard started writing to entertain in 2006. He hasn’t left his keyboard since. When he’s not churning out novels he writes some maudlin self-indulgent poetry and blogs at geofflepard.com. He walks the dog for mutual inspiration and most of his best ideas come out of these strolls.

Be sure to catch more guest posts from Geoff Le Pard in Week 2 of his Blog Tour at these fine blogs: 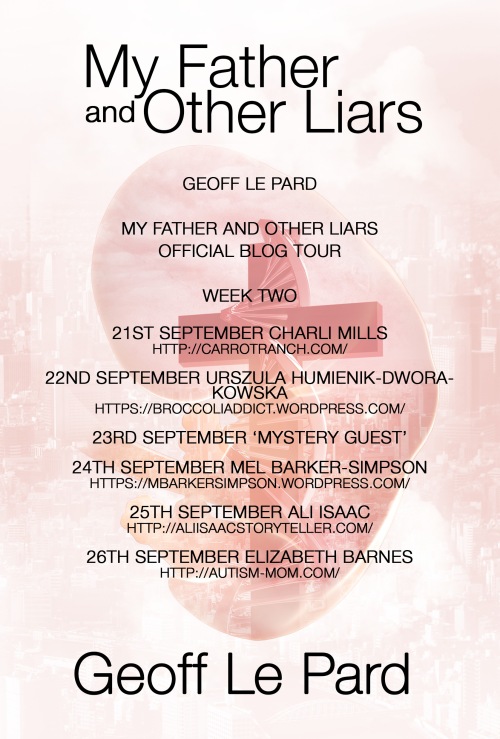