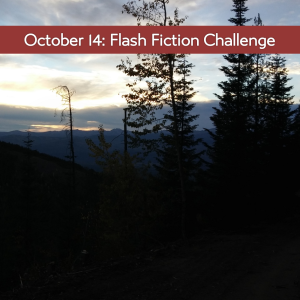 I’m not sure what a photo of serendipity looks like, but I think this is a close match. The point is, serendipity really doesn’t have a look; it’s something that defies expectations, illuminates the darkness. It’s a vast vista of choices. You might set your sights on the Seven Sisters Peaks across the valley. Choose one peak. Set a course. Find the road turns, and adjust. Or you might stay right there on that slope of the Cabinet Mountains, admiring the next range but happy to stay put. Then a log rolls down the hill and knocks you off your feet. You must choose to stand up, go back or elsewhere.

It’s the nature of life that we make choices. Serendipity is the gift we find accidentally when we make a choice or life chooses a course of action for us.

If you set out for the Seven Sisters, it would be serendipitous to find an unexpected guide in a canyon, or the perfect photo opportunity of a bull moose who poses without threat and wins you a coveted photography award. If you stand still and get knocked off your feet, serendipity can still happen. Maybe you meet your future spouse among the rescue team or find a hidden cache of silver bullion at the end of your tumble. Take action; you’ll find the gifts.

But all too often we hold back as writers, afraid to take action.

Maybe because serendipity is no guarantee. And life is often like a journey with a bag of coins. Pull out one coin, and it’s lucky. Pull out another and you find the flip-side.  I’ve had lots of two-sided coins this year. I took my manuscript to a professional conference in LA; no one wanted my manuscript. I got to spend four weeks with my best friend; she died. I planted purple potatoes and nursed an old apple tree; others got the crops.

Yet, serendipity occurs between the flips of the coins. It’s not the good or the bad; it’s the unexpected that can come out of the flipping. I never knew that by going to LA I’d be one step closer to my dream of hosting writer’s retreats in beautiful northern Idaho. I let conference writers know that I have a guest room free for writers to stay and already, I’ve had two writers from NYC visit and even do a poetry reading at my kitchen table. The conference organizers know I live in a rural community and they’ve graciously offered to let me host a panel from the conference. Yesterday I set up my first panel in collaboration with my local library and a seasoned regional publisher. It opened unexpected doors.

Although I don’t recommend spending a portion of summer in a hospital room, I shared time with my best friend that death cannot rob from me. One of my most exciting pinch-me-moments occurred in that room when I received an email from a publisher expressing interest in my Rock Creek project. Sharing that with Kate was a gift. She knows best my long journey and even in her own situation she was truly a best friend and shared in the joy of that moment. No matter what comes of it, it was illumination in a dark place.

My apple tree harbored many gifts, just not the one I had expected. In May, I stood beneath the flowering branches and listened to the hum of life — bees and calliope hummingbirds that glittered gold and ruby. It was a sight to fuel my writing. The potato patch has become a bit of a family joke. What hasn’t violated my purple potatoes? First it was gophers, then turkeys and next deer. I dug up the remnants. Every large potato, every last one, was gopher-gnawed. The smaller ones were not chomped and I’ve enjoyed being the one to put the bite on them. Yet, in a moment of serendipity, when I thought the potato patch finished, a mama moose and her spring calf pounded the dirt with hooves the circumference of teacup saucers. Why, I don’t know, but to see moose in my garden made up for all other wildlife infractions.

But back to writers and serendipity.

Take action without holding tightly to outcome. Yes, have a goal, a plan of sorts, but keep an open eye to the unexpected. The agent who turns you down might buy you the time you needed to find a different path to publication. Or, in my situation with Miracle of Ducks, I knew something was off with the intro. My editor noted it but beta readers said it was fine. Because I’ve sat on it all summer, when I read the first chapter to my mother-in-law and her twin, it jumped out at me what was wrong. Truly a gift of sight! Sometimes we need to slow down and this process of writing invites us to do it, but we feel impatient. Fill the slow stretches with other projects. Learn to dance with your writing as if it were a life-long partner not some quickie date at the nightclub.

Serendipity will show you how those flip sides and lucky tosses come together eventually. By nature it’s accidental. But I also have a strong faith in God and am “confident of this, that he who began a good work in me will carry it on to completion until the day of Christ Jesus” (based on Philippians 1:6). Now I know that we all have free will and unfettered minds to make choices. For me serendipity is a God-moment; a reminder that he doesn’t direct the good and bad that occurs in life, but he directs the good in me, thus giving me a purpose in existing. I don’t think God cares one way or the other that I publish books. But I do know he calls me into relationship. I pray hard when times are rough; I rejoice over good days; and I’m humbled by the gifts that only God would know I’d appreciate.

What is serendipity to you? Have you experienced it in your writing? Do you hold back, hold on to expectations or set out for yonder peaks, knowing something good will happen, even if by pure accident? Things to ponder as you write or consider the motives of your characters.

I’ve often wondered about Cobb McCanles and the bitterness he had to have felt at Rock Creek. He set out from North Carolina in February of 1859, when his family all relocated to eastern Tennessee where their views and values were more aligned with others. Like many Unionists, Cobb believed in the economic development of individuals. In a time when political tensions were mounting between the industrial interests of the north and the slave-based agrarian system of the south, individuals were seeking life-improvement out west. Fame and fortune is a stereotype, but one that describes the impulse to leave a known community and move to the frontier.

Historians claim that Cobb set out for the Pike’s Peak Gold Rush of 1859. If he did, he might have had early information from the northern Georgians who were seeking gold in Colorado, unsuccessfully at first. Residents of western North Carolina traveled annually to northern Georgia to buy supplies like coffee and sugar. Otherwise, families like the Greens from which Cobb’s wife Mary came from, were completely sustained by their own means — they grew crops, distilled whiskey, raised hogs, milked cows, spun flax and wool, built barns and furniture and made their own iron tools and nails. Outsiders called them poor, but they had all their needs met, including a fierce independence. It was men like Cobb and his family that also valued literature, music and education. These men didn’t want the gaudy wealth of planters but neither did they want mere subsistence in the woods. I imagine that after the economic crash of 1857, Cobb listened more closely to stories of the Georgia gold seekers. He was sheriff which gave him access to news through journals, county officials and local gossip.

Whether or not Cobb set out for the Pike’s Peak gold fields, he stopped at the Rock Creek Station. Think of it as an 1850s truck stop — a place for travelers to rest, buy food, take a bath, repair wagons, trade horses and hear the latest news of the trails. Serendipity occurred when Cobb and Sarah stopped at Rock Creek Station; Cobb asked if the owner would sell and he said yes. I don’t believe that Rock Creek, Nebraska Territory was Cobb’s expected goal, but he found a wonderful opportunity. The man was a builder, likely having learned carpentry from his father who was known as a cabinetmaker. The first thing he built was a toll bridge across the dangerous and steep crossing at Rock Creek. All in all, Cobb built a second ranch on the other side of the creek, a third a mile a way and he made improvements to the original, thus attracting the attention of the Overland Stage Company, the precursor to the Pony Express.

So why bitter? After his serendipitous gain of Rock Creek Station, every business dealing he made resulted in default. He sold and reclaimed the toll bridge several times because buyers never paid up; he reclaimed a wagon from a farmer who bought his hay and never paid; he became partner to the Pony Express with Rock Creek Station only to be pushed out by the company claim that it had to “own” its stations; the Pony Express never paid Cobb for his station.

Now you are seeing more of what I see in Cobb — a self-appointed adjudicator of the law, an ambitious and industrious man, temperamental and passionate, educated and brilliant orator, unfortunate businessman. He was also a dedicated family man. He was complex, that’s for certain. But truly, so are we all. Rock Creek was his moment of serendipity. It was also the place of his untimely death. Serendipity holds no guarantees, but we can take the gifts it offers.

October 14, 2015 prompt: In 99 words (no more, no less) write a story that reveals or explores a moment of serendipity. How did it come about? What did it lead to? You can express a character’s view of the moment or on serendipity in general. Use the element of surprise or show how it is unexpected or accidentally good.

For those of you who recognize, serendipity has been a prompt before. What can I say, but I like its magic! And it is never the same gift.

Respond by October 20, 2015 to be included in the weekly compilation. Rules are here. All writers are welcome!

The Offer by Charli Mills

Fiddle music faded, and Cobb wiped sweat from his brow despite the cool night. He set his instrument in its lined case and sat down.

“Woo boy! You play a mighty fine fiddle, Mister!” The short-legged man crouched by the crackling fire. Short legs, but he could dance a big jig.

Cobb looked up at the stars. “Mighty fine place you have.” He could imagine Mary’s face at seeing the rich sod. If this was his, he’d build a toll bridge across that confounded crossing, build a bigger barn, sell hay.

The man leaned over. “Wanna buy it, Mister?”