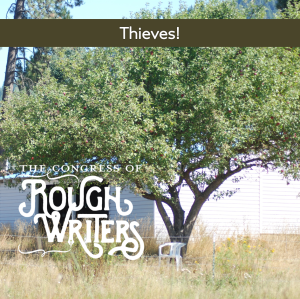 As a victim of theft, one feels violated. Yet, often the thief is vulnerable. Nonetheless, thievery has proven to be a rich topic for writers who have explored motives and related subjects. We discover time is a thief and so are adorable dogs.

Steal a few moments to read this arrangement of flash fictions based on the October 7, 2015 prompt: In 99 words (no more, no less) write a story about a thief or a theft.

All in the Name of Hunger! by Ruchira Khanna

A rattled and guilty Samira was sitting under a bridge while nibbling at the crust with eyes wandering 360 degrees.

He was chewing ruthlessly to swallow the crushed contents in his mouth. Hunger made him steal a loaf from a bakery. Now he feared the consequences, but with no pennies to spare he did not think twice over again.
While dusting off the crumbs from his bare chest, and adjusting his hair, “Life is not fair, but I have to own up” he mumbled as he walked towards the pastry shop to own up his crime and face the ramifications.

Fred peeped out from behind the hedge as soon as the upstairs light went out.

Starkers and desperate, he ran for it, grabbing the first thing he felt hanging on the washing line.

A dog barked and the bedroom light snapped back on.

A shot rang out.

Ethel cackled, relieved that the next full moon was still a full month away.

I take the spotlight on the stage.
Gesturing, I steal the show.
Time is a thief and so am I:
I steal away, and thus I go.

I take the cake, and eat it too.
Needing some help, I take advice.
Shopping, I do a double-take:
Daylight robbery, that price!

Passing a window, I steal a peek,
And stolen kisses meet my eyes.
I take a risk, I take a shot:
My photo’d kiss, it took first prize!

A nightly battle. At the end of a long day, I collapse in a pile of fleece and synthetics, my ever chilled body warming instantly in my heavenly cocoon of carefully purchased coverings.

He stares at me, his dark chocolate eyes glistening in the soft glow of the lamplight. He knows…

Curled up in the blanket, my blanket. As I lower myself next to him, glaring at his thieving cuddly cuteness, I try not to smile.

I cave. Every time.

The Benefit of the Doubt by Geoff LePard

Mary turned at her daughter’s voice. Immediately her maternal instincts rose alongside her hackles. ‘Let her go!’

A shop assistant pulled Penny away from the fruit section.

‘Are you her mother?’

‘She was stealing the grapes.’

‘Penny! How could you? I’m terribly sorry.’

In the car, ‘Penny you know that was wrong…’

‘Grandpa always tasted the grapes to make sure they were sweet. No one stopped him. It’s not fair.’

“I came into your shop every Thursday, looking at the magazines, casting hidden glances at you, purchasing nothing. And on the way out, I took a lollipop, sat down on this very bench and licked it. I dreamed of you coming out one day, sitting down beside me, and saying that, as you loved me, I could take as many as I wanted.” She laughed, the way you do when you just told a heartfelt secret.

“Huh,” he answered, distractedly, “I used to offer the lollies to small kids that came in with their mothers, I never even noticed.”

The morning started badly; nothing unusual in that. He’d been woken in the night by shouting, slamming doors, and screeching car tyres. Nothing unusual there either.

There was no milk to moisten his cereal, only a slap to the head for daring to ask. He grabbed his bag and disappeared before she used him as an ashtray, again.

Looking for a fight, he couldn’t believe she was just sitting there clutching her stupid unicorn. He snatched it; danced a jig to her wails, then threw it onto the roof.

“Who cares?” was his response.

The Dress Thief by Luccia Gray

Cristina held her father’s wasted hand as he limped along, head bent and soul shattered.

He glimpsed at a woman across the street, squeezed his eyelids to hold back the tears, and pulled his daughter’s hand firmly.

‘Don’t look,’ he pleaded, but the child hurled his hand, jumped on the woman, scratched her face and spit, ‘Thief!’

Cristina tore the buttons of her dress like a wild cat. ‘It was my mother’s!’

‘She doesn’t need it in the graveyard!’

‘Your family left when the soldiers came!’

‘Nothing is yours anymore!’

Ed and Edna made their way into the cavernous stadium for the big game. As they passed a condiment stand near the hot dog concession window, Edna innocently reached over to the stack of napkins.

“Stop, thief!” the vendor screamed from behind the window. “Those napkins are for customers. That is stealing!”

Edna froze, not knowing what to say.

Ed stepped in, looking at Edna holding two skimpy napkins. He turned to the irate vendor and then read the menu board updated in chalk: Regular Hot Dog $9.75.

Ed glared at the vendor. “The only thief here is YOU.”

No Replacement by Ann Edall-Robson

There is no replacement. Machinery and technology could not make it better.

Fourteen steps is all it took for a life altering experience. Steps used often. Had complacency set in? Perhaps destiny was making a statement to see how much strength was left in the soul.

That moment, the time when a simple step downwards changed everything forever. Normalcy shattered in a heartbeat. The hearing loss, balance marred, memories tainted all in the split second it took to fall from the highest spot on the stairs.

So much was stolen on that day. The gift of life was not.

It wasn’t enough that he stole memories by not sharing what
he knew. Pop said he forged the checks due Mae, (because
of her mother’s death,) to bring his baby back home. Mae was
expecting to use that money for college tuition. She’d left
home but forgot about forwarding mail. Mae thought he’d be
honest about that.

But he wasn’t honest with the charity money Mae had collected
that one autumn either. Took that for bills, so she thought, but
never did know what happened to it. Ill gotten gains…parents
aren’t supposed to cheat and lie.

She recognised the hole by the rough edges that scraped against her soul when the sky was overcast. They mocked her at the clinic, said it was impossible for a nothing to make her sick. Refusing her an x-ray, they accused her of malingering, but the hole grew bigger so she went to the mall.

Miles of shiny new things to plug a heart-shaped hole: she stuffed them in her pockets, in her handbag, up her jumper, but the hole remained.

Prison gave her solace. If she couldn’t close the gap within her, she could fill a cell-shaped hole.

“Thieves get the third degree, Joe Holmes. You were caught with stolen goods.” Cobb hauled the old man to the thorny locust tree.

“No!” Nancy Jane screamed and Sarah lost her grip on the woman. She flung herself between her father and Cobb. Sarah flinched.

“This is interesting.” Hickok walked up to Sarah from the barn, arms folded, revolvers resting on both hips.

“Do something,” Sarah pleaded.

“A thief deserves a noose,” he drawled. “Joe’s getting off easy.”

A generous thief, it steals by giving. Answers. Phone numbers. Directions.
It’s slick. Shiny and without strings attached. It steals imagination. It steals anticipation. It promises connection yet divides our attention.

The minutes add up. Five hundred. Seven hundred. Unlimited. Bundled. Rolled over. Stolen. One glance at a time. It dings and rings. It steals sleep in the night.

It snaps pictures. It is the keeper of data. Of memories. It steals whole languages, shortening words and correcting mistakes. Each thief is sleeker. Upgraded. Capable of stealing our breaths with its flawless design.

Look down, a thief is calling.

Whenever Kaitlin volunteered at the local poverty relief charity, she had to tolerate Bernelle, the full-time secretary, who barked commands and wore heavy perfume, as if to mask the smelliness of everyone around her.

Once, after Kaitlin had finished assembling nutrition baskets, she saw Bernelle open a basket, take out a package of almonds, and slip it in her pocket.

“Aren’t those for the baskets?” she asked.

Annie couldn’t believe her eyes. Until now, employee theft was a vignette on a training video. But Jessica – what was she doing?

Hunched over the register with no customer in sight. Punching in numbers, scanning a gift card. Then going to the customer side and signing. What was up?

Jessica had bought stuff with a gift card, processed her own return – but kept the stuff. Plugged the UPC’s in from the receipt.

Annie stepped around the corner, called security. “Check the video on register 35,” she whispered. “Something’s wrong.”

Dinner for Two by Sarah Brentyn

“It’s just lipgloss, not a car. Anyway, you won’t get caught.”

“How do you know?” Cindy glared.

“It’ll be hidden in that oversized backpack you always carry.” She patted Cindy’s bag.

“I don’t need it,” Cindy slapped her friend’s hand away.

“You know you want it,” she taunted. “C’mon. It’s pretty and you don’t have any money.”

Two buses later, Cindy stood at the end of her street. She kicked rocks along her path, ran up the dirt drive, and pushed the door open. “Mama? I’m home!” Unzipping her backpack, she shouted, “I brought dinner!”

And if thieves ever had an epic musical score, it would be the “Ecstasy of Gold” that accompanied one of the most intense shoot-outs between thieves of the old west in The Good, the Bad, the Ugly. The amazing orchestra version by composer, Ennio Morricone: