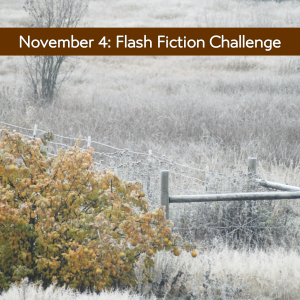 Diffused morning light filters through a thin cloud cover to reveal a frost-encrusted landscape. I’m not naturally a morning person so this vision is relatively new to me. I like to rise after the frost has melted to dew and more color is revealed. When I draft, I can stay up as late as 3 in the morning, fueled by my imagination.

But I’m revising. It’s a discipline that calls me out of my natural state of being. Thus I rise early.

Or does it? Every week I follow Daphne Gray-Grant, a publications coach whose blood runs with ink. I haven’t missed reading her weekly email in three years and I consider her book, 8½ Steps to Writing Faster, Better to be one of my best writing tools. Yesterday, I received her email that spoke directly to my NaNoReViSo state of mind — it’s messy.

Her post asks if my mind is messy enough?

Oh, it’s messy! It was so messy yesterday, I sat with Scrivner open to a crucial scene, vacillating over the possibilities of “limited supplies.” You see, when Cobb and Sarah arrived at Rock Creek Station in March of 1859, he purchased the cabin, barn, land and lean-to store that sold hay, grain and “limited supplies.” He then built a toll-bridge and charged pioneer travelers to cross Rock Creek. He built a toll-booth of sorts, another cabin. He built a house, a stable, another barn. He bought a plow in Leavenworth, Kansas and grew a bumper crop of hay and grain that first year. He built as many as five ranches and ran stock.

But what did he sell to travelers as “limited supplies”? And does it matter to the story?

It does matter because it captures the essence of a road station in the late 1850s and 60s. One historical account for the region claims that “real” stores didn’t open up until the latter part of the 1860s, long after Cobb had died. I turned to the 1860 census record and a plat map that showed some of the earliest homesteads, including Rock Creek Station. I began to plot who was where that important year. I realized that living among Cobb’s workers, was a trader by the name of William N. Glenn. The man who sold Cobb the station was Newton Glenn. Was this the same man? Did he stay on to sell “limited goods”?

In 1860, the census records less than 100 people living the territorial county of Jones (now Jefferson). Of that number, a good many of the men listed their occupations as traders, just like Glenn. An old pioneer remembered Sarah Shull as keeping a store at Rock Creek Station. This makes sense and fits my theory and subsequent story that Sarah was in business with Cobb. But what were they selling? What are “limited supplies”? Why were these stations and traders not regarded as true stores or merchants?

By now, I had four books open, two maps plotted with five different colors of ink, three internet pages up to search for “limited supplies” along the Oregon Trail, and no clear answers. I saw a phone number for the Oregon Trail Interpretive Center and in desperation I called, feeling silly when a person picked up the other line.

“Um, I have a question…can you tell me what limited supplies pioneers would have purchased from traders along the Oregon trail, specifically in Nebraska?”

What I received in response made me giddy. I found a history nerd! The historian on the other line explained that after pioneers supplied up along the Missouri River, they entered the “wilds” beyond. Traders were typically those looking to make money off the travelers (yep, I already pegged that as Cobb’s motive for business). They knew the land, the tribes and they traded with the Pawnee and Otoe, as much as they did with the settlers. They specialized in dried buffalo meat, buffalo hide blankets, whiskey and moccasins. Shoes wore out quickly on the trail, she said. This is a great detail because I had imagined Nancy Jane living barefoot and pining for real shoes. I’ll revise that scene to have her in moccasins and wanting store-bought shoes.

Before I got off the phone, the historian mentioned she wished she had more time to research this question because she has volumes of diary accounts and books…Really? Okay! I told her I had six weeks, and she happily agreed to answer my question fully. Elated, I got off the phone and went deeper into the records I now had open, noticing even more crucial details that clearly show Cobb was a prolific builder and a community leader. How did it ever go so wrong for him to be remembered as a bully Confederate trying to steal his neighbors livestock? On the census, he’s recorded as owning more land and livestock than anyone else, and is credited with paying for the first teacher, allowing those of few means to cross his bridge, was a fine orator and a leader who organized the territory’s first vote.

I look out at that pristine morning scene and long to be able to write the vision so clearly that the reader can see the edging of frost; to color it correctly to discern fence from quince tree; to show and not tell, yet ultimately tell the story of an incredible event that involved real people, not mythological white hats and black. I want to get the vision right.

Is it about being right? No, not really. More like giving a tone of humanity to a man robbed of his dignity whether he was all good or all bad. And to give voice to the women that history never considered beyond silhouettes of wives or mistresses. We are all fully fleshed and mixtures. I want to get the colors of Rock Creek sharp and balanced without feeling frozen in the process of that undertaking. I can accept that my writer’s mind is supposed to be messy. It makes me think I’m on task.

To all of you revising or drafting, keep at it every day. The sun will melt the frost and messiness will ensue.

November 3, 2015 prompt: In 99 words (no more, no less) write a frozen story. Is the weather the source of freezing or is a character frozen by emotion or lack of it? It can also be a moment frozen in time. What does it reveal?

Respond by November 10, 2015 to be included in the weekly compilation. Rules are here. All writers are welcome!

Sarah fidgeted in the freezing air of the prairie morning. First night on the trail in these western wilds. She had an extra cup of coffee at the campfire Cobb built that morning. The hot enamel mug felt good in her hands and tasted even better with the thick slabs of bacon he fried. Cobb bought the best items and loaded their new wagon. While others dickered over prices of mining tools in Leavenworth, Cobb uncrated a large plow with an iron share and wooden mouldboard. A plow? Had cold made him daft? He winked and they headed out.