Today I got an email from the NaNo organizers that encouraged:

I’m thinking of both service and those served in light of Veteran’s Day or Remembrance Day. Like the yin and yang of writers and readers, a novel exists in the hands of both. And so do wars exist in lives of soldiers and those seeking peace.

Not that writing a novel is a war, but it can be a battle at times. Often I fight doubt and have to press through hardship to reach my goal. The biggest hardship is managing time, which often leaves me feeling exhausted. Not as worn as a soldier on the battlefield, or displaced persons on the run. But in the battle to get words and time committed to pages and revision, I find late nights and coffee-fueled morning are becoming a pattern.

So I’m proposing rest. Soldiers often took R&R even in war-times, their leaders recognizing the importance of overcoming battle fatigue. And what better place to rest than in my bed, or so says Grenny who stretches out across our comforter, relieved that the humans have finally vacated his favorite spot. Restful spots can vary as much as mattresses and pillow preferences (talk about wars, couples often fight about firmness and softness, fluffy or flat, hot or cold).

Even sheriffs need time off to unwind. Was it possible that Cobb McCanles tired of his profession and wanted a comfortable retirement to recoup from his occupation? Around the same time that Cobb was planning his leave, a fellow sheriff in another North Carolina county found refuge in an insane asylum:

INSANE — Mr. Plunkett, Sheriff of Carabus County, was brought to this city Friday last and placed in the Insane Asylum. The duties of his office, it is said, were probably the chief cause of his derangement.

Pressure is a motive to consider. Yet, Cobb was young and self-possessed; he hardly seemed ready to settle into a comfortable down mattress or padded cell. The fact that Cobb served any longevity as Sheriff of Watauga County, North Carolina is a matter of restless dispute.

James Butler Hickok has numerous biographers and all make various claims to Cobb’s service as Sheriff. Because most biographers glorify Hickok, they all want to discredit Cobb to make it look like he was the bully who got what he deserved — shot. Yet, if anyone points out that Hickok, or Wyatt Earp were bullies, the fact that they occasionally wore a territorial lawman badge is used to defend their tough actions. If it were true that Cobb served as an elected Sheriff for more than seven years, and that he formally organized a process of adjudication of the law in the Nebraska Territory, then his actions at Rock Creek might be better understood as ones attributed to a lawman.

Respected contemporary Hickok historian, Joseph Rosa, like all other past historians of this event, does not seek any documents or records relating to Cobb McCanles. All he does is repeat second-hand stories historian John Preston Arthur recorded in 1911 and that William Connelley repeated in 1933.  Rosa writes:

He got himself elected deputy sheriff of the county in 1852, but he and the County Sheriff, one Jack Horton, disliked but tolerated each other. Horton was a big man and may have resented the younger man’s strength, which probably equaled his own. They agreed that McCanles would not run for sheriff in any forthcoming elections, but McCanles obviously had no intention of keeping such a promise, and in 1856 announced himself as a candidate.

First of all, how do we have any way of knowing whether or not Horton resented McCanles? Come on, that’s my job as a fiction writer to come up with thoughts, feelings and motives. Historians make good fiction writers at times. Do you see how cleverly Rosa defames Cobb as an oath-breaker?

Connelly is among the worst Cobb bashers as far as historians go. George Hansen wrote a 1927 article for the Nebraska Historical Society about the Rock Creek incident and included Monroe’s eye-wittness account and family history from the McCanleses. Connelly was with neighboring Kansas Historical Society and resented Hansesn’s account that showed Cobb in a more favorable light. So great was the verbal battle between these historians that Rosa refers to them as factions. And factions only muddy unclear water. Here’s a snippet from Connely’s book where he discredits Hansen’s work:

Perhaps neither Mr. Hansen nor his magazine knew the facts — a most unfortunate circumstance if true — for it would seem that the editor should have known, having been entrusted with the accurate preservation of the history of a great state. If these men were in possession of the truth and suppressed it, what a situation they made for themselves…

…The real purpose of Mr. Hansen’s statement was to establish a good name for the ruffian.

“At the age of twenty-three David was elected to the office of sheriff of Watauga county on the Whig ticket, to which office he was elected four successive terms.” [Connelly is quoting Hansen.]

Not true. Jack Horton was sheriff from 1852 to 1856 and McCanles was his deputy during that time. In 1856 McCanles ran for the office against Horton and was elected. This was his only election. He held the office until he absconded, January 6, 1859. His term would not have expired until 1860.

Mark Dugan is the only historian I’m aware of who actually searched records to settle this dispute. Stoneman’s Cavalry burned the Watauga County Courthouse in 1863 during the Civil War. A side note is that my 3rd-great grandfather rode in that raid on the Union side and he was married to Cobb’s niece, my 3rd-great grandmother. Mary, Cobb’s wife, lost her brother in that raid. He was a Confederate soldier. Digging into the past, even today, can be like digging into a wound. Duggan did though, and he claimed to have found a tax receipt from 1852 that was signed by a deputy on behalf of “Sheriff D. C. McCanles.”

While that seems to settle the dispute, Dugan fails to copy or record the whereabouts of this receipt. I’d like to believe it, but I don’t want my research to be as biased as that of others. I had searched North Carolina newspaper archives for news of Cobb’s land deed troubles in 1859 and beyond. In trying to understand the role of sheriff and bonds at that time, I found a book of historic statutes from North Carolina. It was there I discovered that sheriffs in the 1850s were elected to two-year terms. That means, if Cobb really was elected at the age of 23 in 1852, then Hansen was correct in recording four elected terms for him.

Once I found out when elections took place, I began searching August newspapers for election results. And this is what I discovered: 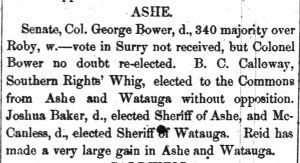 McCanles(s) elected Sheriff of Watauga! However, I was surprised to see his political party as “d” for Democrat, not Whig. Each election year, I found results that Cobb was elected and under different parties. In 1854 he did run on the Whig ticket; in 1856 he ran on the controversial K.N. (Know Nothings); and in 1858 he ran on the “dis.” ticket which I have yet to decipher. Discontented, perhaps? He left North Carolina and his position of authority six months after his fourth election.

Thoughts of why fill my head as I try to connect my draft to deeper research results. My current research is because I wrote earlier chapters and noted wobbly entries as “look up later.” Well, it’s now later. And it’s late. Time and work is spent and now I seek a comfortable spot that is Grenny-approved.

November 11, 2015 prompt: In 99 words (no more, no less) write about a place of comfort that is a refuge. Have fun with it, like a pillow fight between best friends at a slumber party or newlyweds in search of the perfect mattress. Or you can go dark and write about unusual comforts, like a bad habit or a padded cell. Play with the idea of comfort and refuge.

Respond by November 17, 2015 to be included in the weekly compilation. Rules are here. All writers are welcome!

Refuge on the Porch by Charli Mills

“Perhaps you have milk that is not more than one quarter flies?”

Sarah set aside her ledgers when the traveler walked into the post holding a teacup like a live rattler. He had slept in the bunkhouse with the Express riders, declaring he couldn’t sleep another night on the ground.

“Comfort has fled these rough parts.”

“I’ll fetch you fresh milk and hot tea. You can wait on the porch.”

When Sarah returned, Lord Burton was smiling. Like many who felt displaced in the vast prairies, the old hickory rocker was a throne of comfort.