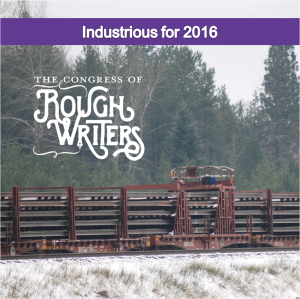 It’s the year of rolling up shirt sleeves, more or less. Effort doesn’t always mean doing more. Industrious can mean steady and determined, as much as it can mean busy and energetic. It comes down to the industry, the person and the goals.

The following stories are based on the December 30, 2015 prompt: In 99 words (no more, no less) write an industrious story.

The smell of fresh baked sweets welcomed the customers when they came through the door. Small tables dressed in crisp linens were adorned with a tiny nosegay of flowers, fresh from the garden. Each table placed intimately around the room.

This had been their dream until the accident had left him a paraplegic. They heard about funds available to start new businesses for people displaced from their jobs by accidents.

Their dream traveled a different route. Rehabilitation and hard work had paid off. Now his wheel chair moved easily around the custom kitchen.

He baked. She served their guests.

Normal is Overrated by Roger Shipp

Let me correct that. No one used to call.

Now, it’s home base … another emergency. With them…there are only emergencies!

Having left extreme sports for a more nine-to-five job (my wife’s idea), we were a happy, somewhat- normal couple (two kids, a gerbil, and three dogs).

I left my passion as a top-five free-climber with seven first assents to my legacy.

Now I was on call to climb communication towers.

Leaning over to kiss her on the cheek, I grab my coat and softly descend the back stairs.

Normal is so overrated!

“If we’re not moving forward, we’re moving backwards,” the self-assured mayor pontificated while snapping his purple suspenders with his thumbs.

Edna was startled when Ed blurted out loud exactly what she was thinking.

“The city improvement we need most is to embrace basic values.”

Facing the projection screen, Watkins and Bowers froze, knowing that Ed and Edna were in the audience.

“I’ve ordered it alright? Have another fag and stop moaning.”

Joe licked a cigarette paper and lit up just as the doorbell chimed.

“About time,” he grumbled as Dee plonked down the pizza box. “What took so long?”

“I dunno, he was foreign, didn’t even speak English…”

Dee nodded as she reached for another slice.

“By the way, you’ve got an appointment tomorrow at the Job Centre. Maybe you’ll find something?”

“Ha, nothing but crap jobs out there, what’s the point?”

The feeling of fear that came over me was overwhelming every thought; my every action as I contemplated the implications. “They are trying to kill us”, I said to no one in particular.

Later we three friends talked industriously about the situation that has continued for centuries without any lasting change. The empowerment to act came slowly but life and world changing events often come that way. Like the thief the Bible talks about. We began to realize that we were willing to give our lives for the lives of not only our children but for all children everywhere.

with drones and workers

Industrious , for I’ll accept no shirkers.

they’d have you believe

was a precursor to that other

that saw all in factories

they tried to stamp out

with Unions pulling children out

then claiming wages should be fair,

A shorter week they then dared.

Knowing when work they must

Schooling will be their only hope

As we all know,

Heroes Come in Many Forms by Oliana

Isin had too many relatives perish in Auschwitz. He had to flee Romania. Upon reaching Germany, he phoned his relatives to take over his home before the communists did. He’d also invested all his savings in a machine builder in Dusseldorf; he sailed with his wife and son for Canada. They settled in Montreal and rented a garage just outside the city, where he’d ordered a few machines from Germany that manufactured steel nails. That was the beginning of his empire in 1952 that eventually grew into a multi-million dollar corporation competing with majour steel companies all over North America.

The Resolute by Ruchira Khanna

Zack narrowed his eyes as he focussed on somebody at a distance. Dressed in soot from the recent blast, he had no regrets and his twinkling eyes said it all inspite of a bandaged arm and scrapes on his forehead.
“I did it” he shouted in enthusiasm as he approached that body, and hugged her tight while tears trickled down uncontrollably from her’s.
“I knew, you could do it!” she whispered and allowed the propitious public to haul him away, after all, he built a bridge for all to access. The proud mom admired his what-it-takes.

Pooh and the Honey Tree by Kate Spencer

“Winnie, tell us what your cousin Pooh Bear did after he fell down the honey tree.”

“Me?” she cries nodding her head vigorously.

“He did another boo-boo.”

“He flew up in a blue balloon?” she asks blinking her eyes.

“’Cause he … He wanted the bees to think he was the sky!”

“They got suspicious and stung him.”

“Did Pooh fall down from the sky?

“Ummm no… He floated ‘cause Christopher Robin shot his balloon.”

“Could Do Better” by Norah Colvin

The words blared from the page.

Down through the years the judgement repeated.

No one tried to understand his unique way of seeing, his particular point of view.

He struggled to repeat their pointless words and perform their meaningless tasks.

“Needs to concentrate in class.”

Inside his head the images danced in brilliant choreography.

“He’ll never amount to anything.”

Outside their white noise words crackled a cacophony of dissonance.

Finally, school days done, they clamoured for the inspired works of the overnight success.

I blame the entertainment industry.

Sure, I was a cute kid, but was that my fault? Why I was groomed by producers and agents, abused by talent scouts? Called my parents by their first names, supporting Linda and Clark until the old trust fund went dry by the time I was axed from a hit show because puberty hit and the pimples and voice weren’t so cute.

Where did that leave me?

In rehab, that’s where.

But now, finishing my tell-all memoir with a bomb, I know that I’ve finally found my revenge.

A Busy Person by Jane Dougherty

Everyone round here knows her, the kindly lady with the cane. Doesn’t work after her accidents—she’s pursuing a motorist and the transport company for negligence and dangerous driving. People sympathised, especially because of the cats. We never knew how many she looked after until she was evicted. She’d hung on in the old apartment because she’s suing the owner for something or other. The cats slipped through the net of her concerns. She took three with her. Some were caught and destroyed. The rest roamed the rooftops for a while, lost and famished. All gone now. Nice lady.

We both turned to stare at our mother.

‘It was turning out losses.’

Cutlery fell noisily onto the plates, alongside the calamari.

‘It’s 1st January, and we need to move on before it’s too late.’

I glanced around and coughed.

‘There’ll be jobs for the two of you.’

My sister frowned, ‘What jobs?’

‘We’ll make it work this time.’

‘I’m not waitressing!’ protested my sister.

I looked around at the bottles of Pinot Grigio and raised my glass, ‘I’ll drink to that!’

‘Mrs North. Jasmine and Penny have been plotting I understand.’

‘Jasmine said you needed help in your café and I mentioned…’

‘Don’t you need references? I’ve not done this before and…’

Hansa took Mary’s hand. ‘Honestly a familiar face would be so welcome while we get up to speed. But are you sure?’

Skills passed from father to son, father to son, it was good work. Steady, if not lucrative; we might not thrive but neither would we starve. So long as there were millers there’d be millstones; so long as there were bakers there’d be men chiselling stones from the cliff. Ladies might grouse that their bread was grey and gritty, but so what? Gritstone was gold to us.

Three complete and one nearing; there’d be shoes for the littl’un when the gaffer came to collect. Suddenly a crack; how had I missed the faultline? No choice but to start afresh.

Sarah knelt on the bank above, handing Cobb tools he needed. He waded the icy creek and directed the digging. The timbers he squared himself.

A small and curious crowd gathered. A few of the buffalo hunters pulled whiskey and crouched alongside several Ottowas. Many traded at the store. Her store. Well, Cobb’s store really, but she was running it.

Sarah looked up at the ranch wheelwright Cobb hired. “He’s building a toll-bridge to make a safer crossing at Rock Creek.”

“First spring flood’ll wipe it off the face of the earth.”

“This your first time on Old Hilga, I see.”

I nodded and covered my mouth to hold the gag caused by the motion sickness.

“Don’t worry lad, gets bit bumpy on landing but she generally holds up.”
“’Tis near hundred years since she had a problem landing on this damned rock. That’s when she burned up.”

“’Twon’t take but a bit for us to suck the water up and head back to earth for the delivery.”

“Only take 26 months to get back. Don’t you worry, we’ll put ourselves into deep sleep and you won’t even notice.”

One year on, an unexpected correspondence landed in my inbox.

At first I thought it was spam, but I recognised the sender. My old boss. Or, to be more accurate, my old boss’s boss’s boss. The big boss.

The big boss was sending out links on how to find work.

Despite having left the industry for my own reasons (and pleased to see the back of it) I couldn’t help but feel a foreboding sorrow.

Owned by a blue-chip company, but ended up another Blue Sky Mine.

She’d worked hard all day. On her own as usual. Samuel had engineered it nicely, him rearing the beef and her processing it into fresh farm products sold at the butchers. A great cottage industry except she was lonely and he liked it that way – her pretty face out of sight. Her time all accounted for.

She shuddered as she closed the refrigerator for the last time on the sausages and pies awaiting collection. She mopped the floor and carefully rechecked the gleaming stainless steel but there was no need to worry. There wasn’t a trace of Samuel anywhere.