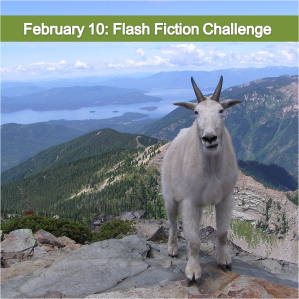 Cute and furry are the mountain goats that live atop Scotchman Peaks in northern Idaho. Even their scientific name, oreamnos americanus, labels them as cute. It means, “a mountain lamb belonging to America.” Aw, what could be cuter than a mountain lamb? Funnily, they are not goats at all, but related to antelope and gazelle.

Nor are they sheep. The Cabinet Mountains, a craggy chain of the Rocky Mountains that span western Montana and the Idaho panhandle, are also home to bighorn sheep. Somehow, they aren’t as cute, but they do have magnificent curling horns. Tourist often confuse the two animals, and I’ve even heard one exclaim that she saw “bighorn goats.” The most notorious case of Rocky Mountain animal identity confusion is the story of the visiting hunter who shot an elk only to find out he tagged a llama.

For casual identification purposes, the mountain goats are cute and furry, white with black horns and beards (both sexes).

And they like salt. Ranchers put out mineral licks for cattle and horses, and it’s not unusual for deer to show up. Wildlife often gather in geological places where they can lick natural minerals, and mountain goats have a clever advantage — the ability to scale rock faces. They also have a newfound source atop the rocky vistas of Scotchman Peaks — hikers.

It sounds adorable. A cute and furry animal, greeting hikers, tongue extended. Like the attraction factor of piled kittens, unwise hikers offer a leg or arm to the mountain goats after a sweaty hike. Experienced hikers, like those knowledgeable of kittens, avoid such encounters with claws and cuspids, or rather horns and molars. Cute and furry mountain goats bite and butt. Last year, the main trail to one of the most spectacular vistas overlooking the Clark Fork and Lake Pend Oreille was closed due to a goat licking that turned ugly. A woman was bit.

Educating humans on good behavior in the wild is a small portion of what the Friends of Scotchman Peaks do. Recently, I had the privilege of interviewing Phil Hough, executive director of FSPW for an upcoming (March-ish) article in Go Idaho. Their target goal is to gain Congressional designation an 61,800 acre roadless area as Wilderness. However, their mission is to conduct education, outreach, and stewardship activities to preserve this amazingly diverse and rugged area where cute and furry goats live. Anyone can become a Friend. I’m a Friend!

In fact, my first event after becoming a Friend was to help the group decide a raging debate: Wine or Beer? My friend (who is also a Friend) joined me. She sided with a pale ale and I chose Love (a Washington state red). We broke the tie with a bacon-chicken sandwich dressed with greens and blue-cheese. Phil greeted me like a friend, and I made a new one, local author and publisher, Sandy Compton. When I say anyone can join, I mean even a shuffling middle-aged writer who most likely could never reach the top of the peaks to see the goats and shoo them off her sweaty limbs.

FSPW are master community builders, bringing together diverse Friends. You can read more about their community building success in my upcoming article, but two points I want to make here. One is the power of community and the other is the significance of wild places to everyone.

The past two weeks, the Rough Writers and Friends have explored the themes of community and power. They are related. Communities pull together, gather, build up. That can be powerful. What impressed me about FSPW is how they focus their efforts of stewardship. Phil pointed out to me that many environmental or advocacy groups circle the wagons around what they are against. Instead, FSPW embrace what positive benefits stewardship and wild places have for Friends of diverse walks (hikes) and interests.

Wild places matter, even to those who are not active hikers or hunters. It’s important to our psyche to know that wild places exist. Consider the words of great souls who understood the importance:

“And this, our life exempt from public haunt, finds tongues in trees, books in running brooks, sermons in stones, and good in everything.” ~ William Shakespeare

“Earth and sky, woods and fields, lakes and rivers, the mountain and the sea, are excellent schoolmasters, and teach some of us more than we can ever learn from books.” ~ Sir John Lubbock

“Land, then, is not merely soil; it is a fountain of energy flowing through a circuit of soils, plants and animals.” ~ Aldo Leopold

Wild places are vital to writers. We find inspiration between sky and water, roots and crown of a tree, the wingspan of a kingfisher. We learn to use all our senses outdoors and seek wild spaces even if it is a city park or a backyard garden. We feel the pulsing energy of the land around us and we connect through it. We even melt into romantic notions at the sight of a cute and furry mountain goat. And what do we do with this? We write, of course.

Imagine the Nebraska Territory as Cobb McCanles first saw it in 1858. Pioneers had already cut ruts making haste to gold fields, promised land or future farms. Yet few actually lingered in the Territories. It was wild space to get through, pass by and go beyond. Buffalo herds still roamed, prairie fires burned seasonally and native grasses grew taller than a young child. Coyotes yipped and prairie chickens courted. A fringe-culture of traders, hunters, freighters and guides loosely populated the prairie before the Civil War. I believe Nancy Jane Holmes, the third female character of importance in Rock Creek, lived in one of these ungoverned wilderness societies.

Historians may disagree, but I believe that Cobb and his brother Leroy made it out to Colorado and back to North Carolina in the summer of 1858. Sarah Shull once mentioned later in life the brothers went out west that summer. It makes sense because antebellum North Carolina was rapidly on a comet path to war by then. Their father, James McCanles, moved with his wife and three married daughters to a cluster of farms in eastern Tennessee where Unionists were gathering and politicking. The McCanles brothers wanted no part of war and explored the areas beyond the Bleeding Kansas and Missouri border where the Border Wars between slavers and abolitionists were in full swing.

Beyond the Missouri River was Indian Territory. Wilderness.

Family anecdotes passed down through letters and generations say that Cobb and Leroy traveled west together. Some family vehemently disagree that Sarah Shull came with Cobb in late winter 1859. Yet surviving documents prove Cobb hired Sarah Shull in March of 1859. They both signed it so she had to be with him. Likewise, other documents place Leroy back in North Carolina at that time. It’s reasonable to assume the brothers did go west together as far as Colorado, but in 1858 not 1859. They would have passed through Rock Creek or other road ranches like it. Cobb knew Sarah grew up working in her father’s store and kept books. She didn’t want to be left behind where she was shunned because she bore a married man’s child, a child who died. Nothing held her to North Carolina.

But the married man, Cobb, was still married and had reconciled with his wife. They also had decided to raise their special needs daughter, almost unheard of in those days. Where else could a man like Cobb make new opportunities for his kin away from brewing war? Where else could he bring his former mistress to run a road ranch trading post? The wilderness beyond the Missouri River.

As to whether or not they encountered cute and furry animals is open to speculation. But I’m fairly certain pioneers wouldn’t have let mountain goats lick them. Who knows.

February 10, 2016 prompt: In 99 words (no more, no less) write a story about wild spaces. Is it a wilderness or a patch of weeds in a vacant lot that attract songbirds. What is vital to the human psyche about wild spaces? Bonus points for inducing something cute and furry.

Respond by February 16, 2016 to be included in the weekly compilation. Rules are here. All writers are welcome!

My gratitude to Phil Hough and my new 6,000 new Friends for the use of this week’s prompt photo. The outstanding mountain goat shot is the capture of Betsy Fulling.

Nancy Jane adjusted the rear sight and held the longrifle tucked to her body. One mule deer, one lead ball. She bit back the curse for her brother for getting himself killed in a border raid. It wasn’t their war. They were wilderness folk, free-landers, friends to Cree and French traders who liked the American prairies.

Movement caught her eye. Jackrabbit. Its long ears upright, nose twitching. If she missed the buck, she’d snare the rabbit. It spooked, and so did the deer when two men rode up on horses oblivious to her in the grass, holding a gun.

By Charli Mills in Flash Fiction Challenge on February 11, 2016.
← What Good is Power? Wild Spaces →