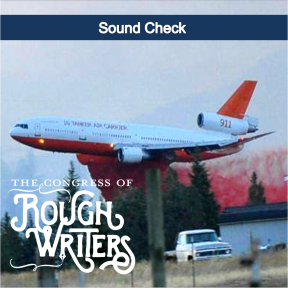 With a resounding boom, writers hit the page. Keys clacking beneath moving fingers or voices instructing a story through diction, writers conduct a sound check. How do we describe sounds? Onomatopoeia is one way ( a word that sound like what it describes), melding sound with other senses works, too.

Writers caught the beat of this challenge and what follows is a collection of stories worth reading out loud.

The following are based on the August 3, 2016 prompt: In 99 words (no more, no less) write a story that includes the sense of sound.

Harmonic Notes? by Jules Paige
(an Elfje series plus)

There
Was a
Thready percussive crackle
That rustled my dreams;
You

Expecting
To interrupt
My pastoral nocturne
With a deafening buzz –
Pop!

I
Will not
Allow your scratching,
Whistling gurgle to echo
Here…

Go
Away…woosh
Be gone strident
Horror! I will sonorous
Peace

Words can be sounding boards to thoughts that rattle
inside our brains. Writers let words out by scratching
on paper. Making us feel minutely better.

The story isn’t always the whole picture. The nightmare
we mask can often be found by looking in the mirror.
If we allow some reflection when we look at ourselves.

The sound reverberates off the hills. The valley floor is stilled of action as the sun slips quietly behind the distant mountains. Unfamiliar shadows move silently among the trees.

Soon darkness will take over. Alone, once again, to face the hush that cascades over the land. No vehicles. No people. No urban light. Only the tranquil sound of nothing as the day fades.

Embracing the mind and soul completely. Moving freely to another dimension. Soothing, and left to soon wander under the stars. The moon’s glow lighting the trails across the meadow.

How loud this sound of quiet is.

The Son by Bill Engleson

Dobbs nodded, as if the additional appellation was necessary.

The boy’s voice was as flat, as blackened as dried blood. Caldwell had not only killed the boy’s father, he had serrated his spirit. His fatigue was beyond grief.

The web of death spun its bitter weave all over the stone carving that was Gifford Barnaby’s face. His tongue was shackled in mute misery, as if he had fallen into his own grave.

“Is he dead, Gifford?” Dobbs guessed.

The orphan collapsed at Dobb’s feet.

No Sound by Susan Zutautas

I sit in silence
It’s totally deafening
All I feel is darkness without any light
No sounds, no words, total loneliness surrounds me
Longing just to hear a voice
I try to hum a tune
No sounds will come out
Overtaken with despair
Never to hear another note
Never to hear sounds that excite
Never to feel any delight
The silence has overtaken all of my thoughts
Driving me into a madness
All days are night all nights are night
No hope in sight to hear another sound
No hope in escaping the darkest time of my life
Silence

The Sound of Silence by Geoff Le Pard

‘Mum, Alma’s cat Lily is ill. Can I go round?’
‘Of course, Penny.’
Penny walked quickly the three streets to Alma’s. Her mum opened the door. ‘In the utility. She likes the warm.’
Alma knelt on a chair by the boiler, her hand tucked under the cat’s head. Alma’s lids looked heavy with recently shed tears. ‘She’s purring. Listen.’
As Penny leant in close, she could hear the cat’s erratic rumbling.
Later, Penny told her mum how Lily quietly slipped away in the afternoon. ‘We knew when it went quiet.’
Mary hugged Penny. Sometimes, she thought, silence isn’t golden.

Silent Night on the Prairie by Charli Mills (from Rock Creek)

Cicadas trilled from the honey locust trees and coyotes yipped in the distance, their song drifting further away. Sarah missed the sound of rushing creek water that used to lull all sounds at night. Here, on this vast stretch of prairie, it was so quiet she could hear critters tip-toe in the dark.

She sat up in bed. Horse hooves? By the time Sarah was certain, she heard men shouting from the camp at Rock Creek. Commotion. Low voices. None nearing her cabin, though. Should she dress? She hesitated. More horses, this time heading east. Then silence. And cicadas.

To Speak for Herself by Sarrah J Woods

“Stop being a baby.”

“Cut that out right now. We’re Christians. We don’t do dance moves like that.”

“I don’t want you hanging around with that kid anymore.”

Throughout her childhood she heard the sound of criticism and felt the stabbing silence of her unspoken replies.

But finally she grew old enough to escape the din. In the struggle-filled freedom of adulthood, the words she never spoke, buried deep inside her, began to softly whisper their presence.

Now she’s learning what it sounds like to speak for herself.

I lay there still, him over me, pinning me down. A black sheet covers the window. Bed springs squeak and poke my back. I close my eyes as he kisses my mouth. I turn away as his breath of stale, half-smoked cigarettes fills my nose. He tugs at my clothes. I bite my lip hard, then taste blood — its iron stickiness. Only the fan hums and clicks rhythmically. Its blades churn overhead. It’s all I hear. No words. No cries for help. No escape. Will the door squeak open? Will anyone step in? Will anyone help me? I disappear.

“Mom!” he shouts from his bathroom.

She inquires with an anxious emphasis.

“No running water” he declares in an annoying tone.

She rushes to the water storage and opens its tap.

From a distance, she can hear the water spurt from the faucet. At first, the flow is irregular giving out a spate of explosions as if announcing its arrival, and after such repeated events, there was fury and momentum in its flow.

That was followed by a soft hum that gave way to a pitch that was loud enough to make the neighbor’s bang her front door.

The year before her father died, he pulled her aside, and asked her to listen to the crickets. Summer’s song, he had called them. Beautiful.

They sipped sweet tea to a chorus of insects.

He asked her to close her eyes and hear with her heart.

At the time, she didn’t know what he meant.

Now she sat, listening to a sound that might have been a symphony but had become the pull of a bow across the string of an old out-of-tune violin. To her, the crickets were a creaking porch swing empty of a father and daughter.

The Sound of the Sea by Luccia Gray

Freddy left. He couldn’t stand the sound of the sea.

The spray of the waves as they crashed on the rocks filled their sea-front flat.

Freddy closed the windows to block out the insistent waves, but it was too hot for Sheila.

Sheila opened the windows. It was cooler but too noisy for Freddy.

Their life savings. Their dream house. Their paradise.

They’d worked hard, counted their pennies, and cut down on life’s luxuries; no summer holidays abroad, concerts, dinner and dancing, because they’d both agreed it was their Nirvana.

But things aren’t always what we imagine, are they?

Minnie honed her voice in hour-long showers until her father pounded the need to use the bathroom. She imagined music circling her like a diva’s gown. She felt rhythms as she walked to school.
Sunday, she’d share her gift with the world.
She primped until she shone like a Pop-star. Although she donned a white robe, Minnie knew she stood out – Younger, more vibrant, more talented than the others. She’d show them.
Music echoed. She filled her diaphragm with air and ambition and belted out the song. Soprano notes echoed. Proud, Minnie bowed, which stunned-to-silence the St. John’s congregation

War Zone by Charli Mills (from Miracle of Ducks)

Danni sloshed her peach margarita the night they set off the M-80s.

When the AR-15s blasted a volley into the darkness, Ike ordered Danni to the tent and dashed down the rutted dirt road, favoring his wounded knee. She complied only to dry her hand and restore the splash of peach spirits over limeade. It was the best part of the drink and she wasn’t going to let idiots lighting off fireworks on the far end of the campground disrupt a good nightcap. Ike would soon realize the sounds of war he heard were celebrations of a free nation.

“Wow! That’s a wood thrush if I’ve ever heard one.” Ed frantically signaled for Edna to stand still. He raised his binoculars and panned the tree branches ahead.

Edna knew not to speak. Ed motioned for her to stay put as he gently stepped forward, binoculars still raised to his eyes. Edna wasn’t into this bird-watching thing, but Ed insisted on dragging her along.

A few moments later another glorious tune of flute-like quality rang out.

Ed smiled in anticipation of the sighting.

Edna gasped and reached for her backpack, recognizing the new notification tone on her cell phone.

When Chance determined how to be converted, to flash Sylvia right to…. that which is too insane written or told; that endless code, mad instructions filtered from planets, moons, and great stars/suns – mimicking scattered miracles, pieces/night… exchange transmission as sound; awaited her …[ know what be reals as rocks and rolls] to receive the puzzled recording which domino the rearrangement of speaker stabs explaining invisible wavelengths and transforming [indubitable lyrics pouring out instrumental] through space [reach!] like finally moving [Touch me!] God in that infamous Chapel ceiling [when flipped, switch, my echoes,..]. Hitting play [my loves and] …click[Bam! We on the fuckin moon!]

It’s the silence that fills my nightmares.

The Eye of the Storm by Norah Colvin

Lightning and thunder boom down the street.

Clink-chink-fumble-fumble “No need to knock.”

Scritch-scratch “I’ve managed – the key’s in the lock.”

Whoosh! chortles wind, as it rushes inside.

Damn! cusses chair chucked onto its side.

Shuffle and scurry. “Straight to the safe room.”

Huddled together, hardly daring to breathe,

Listening and waiting for the monster to leave.

Seth bowed his head as the ambulance approached, remembering that summer day he watched two snorkelers drown. The white noise of vacationers remained undisturbed by the struggle of samaritans dragging a couple from the water. Lifeguards sped along with noiseless footsteps, expelling no shouts only rhythmic life-saving movements. Advancing sirens acknowledged the horror ten feet from Seth.

Sirens. Someone’s hope to be saved. Seth prayed they would be.

The ambulance wailed by.

None of the pictures flashing through her mind made sense. A conference of elephants in England? An Arabic instrument midway between a zither and an oud? A motorbike, churning up the peat, miles from a road? Sadly, the latter seemed most likely and it was the Ranger’s job, if she could, to persuade them to stop.

The noise grew louder as she stumbled through the heather, wondering if she should radio in for help. Then she saw them, heads down, antlers locked, a guttural groaning protesting each was king. Every October it surprised her when the deer rut began.