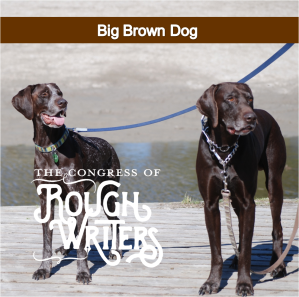 Brown eyes. Brown coat. Brown spots. When a big brown dog comes to mind, it’s like a worn memory of a childhood teddy bear for some. For others, the idea is pure fiction.

Writers took to the form of flash fiction this week to honor the memory of a big brown dog named Grenny. Many had memorials and memories of their own to add — photos and stories. Be sure to click on any highlighted title links to read the blog posts some of our writers include with their flash.

Punchenello Tillingdown – Punch – a pedigree boxer who had to be shown. He was Magnificent. Mum took him to the local dog show. All went well until the vet inspection. Worried faces. Mum wanted to disappear as the vets fondled near his exhaust. ‘Sorry Mrs Le Pard. Has to be disqualified. He’s a mono-orchid.’

Mortified, Mum drags him home, humiliated. At a cathartic coffee morning, she tells our neighbour, Olive Haylor, about the missing testicle. Later that evening Olive regales her husband with Mum’s doom. ‘It was dreadful. Poor dog. He’s a mono… He only has one tulip.’

Latte rested her head on Sally’s lap, and the girl wrapped her arms around Latte’s neck, sobbing until the dog’s fur turned slick. “I thought Jen was my friend.” Latte licked the tears, blinking acceptance and love as her girl hiccuped. “They laughed at my crutches, called me stupid.” Sally’s grip tightened, and Latte gulped. Sally’s Cerebral Palsy made muscle control difficult. “It isn’t fair.” Latte wiggled which loosened the grip a bit, then placed a paw on the girl’s lap. “I don’t hate them. I hate myself.”

Latte wished for human language. Sally sniffed, understanding. “I love you, too.”

With The Banker downwind, Dobbs sucked in a lungful of hot noon air. The town was tense; word had spread.

Their element of surprise was quickly sizzling away.

At one point, Merle Taylor, accompanied by the family mutt, a big brown dog with the unlikely name of Toledo, which was Merle’s home town, brought some soda bread, pemmican and three jugs of freshly drawn water.

He watched Henry kiss his wife and wave her away.

Heading back to safety, Merle and Toledo halted before Dobbs. Touching his arm, Merle said, “We need him, Mr. Dobbs.”

She was the only one in the litter that was brown. It made her theeee one! We called her Brown.

By the time she was six months old, we were getting questioned about her name. That loveable ball of brown fluff was changing. Her baby hair was taking on a different hue. Flecks of gold shimmering through.

Big brown eyes watch our every move. She is still the Brown that we brought home so many years ago. Slower now, but fetch is still her favourite game.

We still get questioned about her name. She will always be our Brown.

Cobb glanced at his son, setting aside the chisel he was using. Without grabbing his shirt, he followed Monroe to the edge of Rock Creek. “Is it mean?”

Lizzie sat with her other two brothers gleefully clapping, “Big brown dog!” Her brothers looked as worried as Monroe, who was eldest.

“So, where’s the dog?” Cobb scanned the thicket below. He heard a rustle. And out walked a big brown bear.

“It’s beautiful.” She looked down on the ancient house, nestled in a fold of the moorland.

“It’s your home now.” He swung his bride round and kissed her, she shuddered.

“What is it?” he asked, concerned.

“Nothing,” she replied, “I just thought I saw a big brown dog, it startled me.”

Smiling she took his arm as they returned to the carriage.

“I think we will be very happy here.”

Laughing he lifted her in his arms.

“Despite the hound?” He asked as he carried her over the threshold.

She kissed him. “Of course.”

“Then welcome to Baskerville Hall!”

Barney was brown, black and white, fluffy, soft and loveable.
A border collie, we brought him home with his brother Rubble on August 5th 1995.

Rubble grew distressed every time we closed the door (we only had one into the property) so we had to take him back to the farm.

Barney however stayed, but was afraid of thunder and fireworks, so he’d hide in the bath.

When we revamped the bathroom and replaced said bath with a shower cubicle, he was confused for a while, then just sat on the little step where the bath used to be instead.

A two-year wait for an assessment? She could be dead by then.

“You can have a therapy dog in the meantime.”

She imagined a big brown dog barking at the juicy bits. Why not? If dogs could sniff out landmines and prophesy an epileptic fit.

Bruno was bright, but not that bright. Even so, his exuberance hauled her from her bed. The rhythms of walking soothed her. His antics dragged laughter from her belly. His wagging tail drew her into conversation with strangers.

Two years flew by. She still wanted therapy. But only if she could keep the dog.

Jane rounds the corner of the shabby house, hoping her break-in has gone unnoticed, and stops cold at a sound, a sound that isn’t traffic or birds or whispering trees. A whimper, a whine. There, on the porch.

“Hey, beautiful dog,” Jane whispers. “Did they leave you, too?”

The dog, a German Shepherd, thumps his tail. He’s panting lightly in the heat, ribs like slats under a dull coat.

“Looks like you need a friend, big guy. I need one too.”

Jane fumbles in her backpack, small movements, and tears open the package of jerky.

Home With Bixby by Diana Nagai

Jo opened the door to her childhood home and breathed in the familiar scents.

“Hello,” she called, receiving no reply. Years ago, before leaving for college, she would have been greeted with exuberance, Bixby’s front legs reaching for a human hug. Slobber would have splashed her as the massive dog nuzzled, necessitating the use of a “Bixby Rag”.

Jo crossed the kitchen and crouched beside the dog. Bixby awoke slowly, taking a moment to focus. Recognizing Jo, Bixby rolled to his feet and gave her the wet kiss she was expecting.

Ruskea lay sprawled out in front of the sofa. Her two pups wriggled and twisted under her belly.

With a yelp and one push of a paw, play was over. Ruskea had had enough. It was time to sleep.

Katja and I had hoped for three pups. Ruskea was so gentle and kind with our own two small ones, everyone who visited wanted a pup.

This benevolent protector of our twin boys was now the financial advisor of their future college fund.

Ruskea must have felt our compassion and appreciation. With a wink and a nod, she was asleep.

“His food looks better than mine. Besides which, I’ve eaten all mine.” The big brown dog moved his head tentatively towards his siblings bowl, pulling it back as he saw bared teeth accompanied by an angry growl.

“I want his.” The big brown dog let out a ‘someone’s at the door’ bark and raced to the front door. His sibling followed, not knowing what he was barking at but definitely not going to let the side down. The big brown dog passed him as he returned to the food bowls, quickly wolfing down his brother’s meal before being seen.

“Cappie Go. Go!” I would shout at him as he would come near me.

The fear factor of a four-legged animal creeping onto me was still going strong although that episode happened as a toddler.

The howl, the shriek still fresh in my mind thus, making me very conscious if a dog would come near me.

Today Cappie, the big brown dog, was one of them.

I unknowingly was sitting on his blanket thus making him wag his tail around me, and I was on the yelling end.

Until his owner came and swooped the blanket beneath me.

In Memory by Jules Paige

Brown, white, tan – longhair mix, with one blue eye and one
brown eye…The shelter dog we had for nine years… She
helped to balance the household…and she was my protector.
She demanded the run of the house, she did not like to be
kept in a cage, or even in a small room.

When the boys were younger she’d let them dress her up
like a doll…I’ve got a photo of her in a set of shades looking
so cool.

Alas she is gone. We have been pet-less for a long time…
and may remain so.

“Yo, Adrian” by Sascha Darlington

A brown dog stares at me with its head cocked. “Adrian?” His muzzle moves as I hear the name.

Finally losing it, Sascha. You think this little brown dog is calling you Adrian.

“Yes, I’m talking to you.” The dog places its chin on my knee and stares up at me with liquid brown eyes. “Kasey sent me.”

People often ask what breed Carl is, and I always give the same answer, “big brown dog”. I got him from a shelter when he was just a tiny puppy. I think they rescued him from a hoarder. I named him after a friend I had just lost. It turned out to be a great idea as their personalities were so similar, sweet and playful but with no patience for fools. They both got me through some hard times. Now we’re both getting to the end of our time the way we all should, old and tired and content.

Ed looked back and forth between Edna and the huge brown Pointer she brought home from the shelter.

“Help me name him,” she replied.

Ed covered his ears in protest, clearly having heard enough. Edna frowned as she stopped in mid sentence.

“The name is obvious,” Ed declared while raising his finger to make sure he had Edna’s full attention.

Grenny in 99 Words by Charli Mills

From puppy teeth to an old dog’s grizzled muzzle, you knew to roll over on your back and grin. You slurped toilet water when available, and once you went sewer tasting, as if it were the ultimate baby-diaper notes of California Chardonay. Lap dog, big dog, confronter of moose and bear. If an ambulance passed, you sang two-part harmony with your sister. Known as Wingus & Dingus to the two-legged pups in your pack, you were my source of stories and photos. You always comforted your sister, licking her face, warning us of coming seizures. Now she whimpers alone.