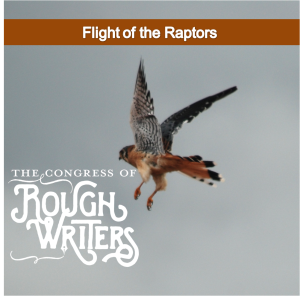 Stories take to the skies on the wings of raptors. It adds a greater awareness, calling us to look up, to follow the currents of winds or identify new sounds. Raptors can lure us into birding or mythology. It depends upon the story.

Writers explored their options with this topic to follow what unfolds from from contemplating raptors.

Dobbs had waited in broiling heat before. Too many times. Senses primed; sizzling; tension bubbling up; each moment stretched in dusty silence, taut, like the hangman’s rope.

His mind was wandering.

He snapped alert, focused on Hank and Aggie.

They both glanced at him.

Above them, as if swinging from the sun, three turkey vultures circled wide, their wings large and knowing, waiting.

Suddenly, Aggie pointed to the north.

Side-seat Driver (from Miracle of Ducks) by Charli Mills

“Ike, look out!” Danni steadied her travel mug so she wouldn’t spill it. Habit. The mug was empty, but there was a small mass on the faded paved two-lane. Morning sun illuminated feathers Danni didn’t want her husband to hit after fixing the alignment on their truck.

“Ike, that’s a hawk.” She leaned back into his chest, his right arm never once moved from her shoulders despite her jostling.

Always, it started out the same: one step, then another, then raising both arms out to her sides, her feet left the ground and she was flying!

She wheeled and circled, weightless as a feather, swooping low and back up again, high above her world, through the air that belonged only to her.

She was free! Like the eagle she had watched on television once, master of its city without walls and doors and locks, no prison to hold it barred.

When she awoke, she knew with certainty she would never know such freedom, but she held her smile.

“Shut those dogs up.”

I saw red.  Blood. Feathers. Anger. Talons. Inside the coop, wings wide it swooped, talons first. I screamed to scare. For help. Picking up a length of poly pipe I swiped. Now it was the hunted. I raised my pipe to hit again and again.

Suddenly I saw myself.  My reaction to terror the same as that I decried in my country. My role now – Peace: protect the chickens, love the hawk.

A rabbit caught in a trap, perhaps? Or someone stepping on a child’s squeaky toy. A cry, for sure, but was it from pleasure or pain? A call for help or to scare predators away?

He suggested scouring the heather for a wounded animal. She wanted to forget it and continue their walk. Begun in whispers and ending in shouts, their debate drowned the noise that sparked it. Neither thought to tilt their head skyward to watch the pair of buzzards circling, wheeling joyfully on the afternoon thermals. They stomped home, united in disappointment that no wildlife seen today.

A Falcon Graces the Suburbs by Paula Moyer

Its presence was magical. Jean didn’t expect one here. This inner suburb, situated between two golf courses and near two malls, was abuzz with city life.

But there – on the first branch of a neighbor’s tree. A peregrine falcon, talons encircling the branch, calm eyes stalking – something. Something now living, but soon …

Jean froze, as did her dog. They were mesmerized. Small for a raptor, it was gigantic compared to the burb’s songbirds.

The group took formation behind the leader, aiming down towards the building below, a small bungalow in the suburbs.

One whispered to the guy on his left flank

‘Is he sure about this?’

‘Yep. Says he comes here all the time, and they haven’t failed him yet.’

‘But this isn’t normal!’

‘True, but why bother if someone else is going to do all the work?’

Lining up in a regimental row on the wall, the birds waited.
Sure enough, a human came out and placed scraps of bacon before them.

‘See? So much better than road kill!’

Author’s Note: When we lived in Poole, we had a buzzard visit our house regularly who became quite partial to smoked bacon scraps. We called him Claude, and I could get within a couple of feet of him.

The Battle of the Old Birds by Joe Owens

Anderson watched the evil bird circle as his fingers drummed on the old oak table holding his rifle and its ammunition. This raptor had snatched another of his breathing stock just moments ago and when it returned for dessert Anderson would make it another prize for his taxidermy filled back wall in the cabin.

Sure, they were majestic creatures, but much more so when they stayed aloft and didn’t thin the herd.

“I am ready anytime you want to try again old bird,” Anderson said.

The screech announced the time was nigh, so he shouldered the weapon and waited.

Children chattered like birdsong – not a ruffled feather in sight. If only all playtimes were as peaceful.  Sudden realisation.  She scanned the children. Anxiety stirred.

“Has anyone seen Zane?”

She couldn’t leave him there. Could she?

As Thomas approached, Zane screeched and rushed towards him. Thomas fled, missed his footing, and fell. Zane, still screeching, pounced, pinning him down.

If he was, it would be more fun.

My name is Red.

As in the crimson ribbons that will flow from your flesh when my razor-sharp weapon lashes out.

I watch the woman unleash a storm of violence with her sword and a smile.

I will fight alongside her.

She is deadly beauty.

I wait for her to notice me. To appreciate my brutality in battle. To take me under her wing.

She turns, red hair flying free in the salty air. My heart soars.

A laugh escapes her lips as she says, “Polly wanna cracker?”

Dreaming of Flight (from Rock Creek) by Charli Mills

Beyond the whispering voices Sarah could hear the pounding of horse hooves. Like a falcon pushing off a fence post, Sarah took flight and could see the prairie stretch below. She was the raptor and Cobb the rider. He ran a blood-red bay with black mane and tail that whipped in the wind like a woman’s unbound tresses. The horse put his entire body into the run. Sarah pushed hers into flight. Together they covered endless buffalo grass until her coughing broke the spell. She was in bed.

Some feared to die. At 98, Sarah feared she never would.

On Raptor’s Wings by Pegg Gillard

She came silently, lithely like a raptor hell bent on its prey’s capture. Focus so sharp it could pierce steel. Stopping just short of her mark, booted feet planted hip-width apart, gloved hand outstretched, she waited. He knelt before her, head bent in her shadow cast by a razored winter moon. When he looked up into the night, into her eyes rapt paralysis cloaked him. Suddenly, from above and behind him, The Snowy Owl dove to her gloved fist and the two vanished into the moon. Jaw agape in confusion, until he felt himself lifted up on raptor’s wings.

The sensation of flight is exhilarating. Jane tries to laugh aloud but the wind jerks the sound from her mouth and the air from her very lungs. She lazes, riding a current, the land below a patchwork quilt seamed with roads and rivers. The world shimmers around her. She relaxes into floating free.

Jane sighs and stirs in her sleep, Troubles twitching next to her as if joining in the hunt.

The Pride by Ruchira Khanna

“Look at this Red-breasted Flycatcher. Wonder how they were created.” said one hawk to another while perched on a dead frog.

The latter one paused from tearing the muscles of the prey, “You Betcha! One has to be so vigilant to catch them.”
“But they would be tasty since they are so pretty!” the former confessed.

“Sure. But only if we are able to snap them.”

“Talk softly. We are supreme. We are the Lords in this terrain.” the latter cautioned.

That made the former chuckle, “Wonder for how long since everyone has a time scale of supremacy.”

Learning From the Birds by Geoff Le Pard

‘Next Colin will fly over there; we’ll entice him back with a little treat.’ The handler oved his hand and the eagle hopped across.

Penny’s eyes were wide with excitement. ‘How does he make him do that, dad?’

Paul said, as the bird soared high. ‘No idea but I’m not sure you ‘make’ them. It takes team work.’

‘There must be a risk he won’t. It needs trust. Like any relationship.’

Paul watched as she gasped at the bird’s dive. If only it was so easy with human relationships, he thought.

The Hunter by Ann Edall-Robson

Through the breeze, the silence of the land penetrates the vision of the hunter. He waits patiently. There is movement that catches his eye.

Wait. Wait. Lift off. Soaring to heights on the wind like a kite with no strings attached. Flawlessly his wings dip, pushing at the wind. Moving ever closer to the unsuspecting prey scooting from grass to bush.

The wind floats him downward. Still silent. Still unseen. Legs and talons drop. A hair raising screech reverberates across the meadow. A split second, and up again. Lifeless prey dangles beneath the hunter’s body. Another scream declares victory.

Its unblinking eyes unnerved Hal as much as knowing why it visited. His people told owl’s purpose. It conveyed souls to the afterlife. Hal flapped his clipboard at it, hoping it would fly from its perch above the ambulance, but it remained unflappable.

The rest of the crew pushed a laden gurney through the nursing home doors. The owl craned its white-feathered neck for a better view.

“Leave her alone,” Hal said, but with the sound of muffled death, the owl swooped, talons outstretched.
Hal muffled a scream, helpless to stop the winged death collect the dying woman’s soul.

There are hawks in the neighborhood. I’ve seen them carry off both rabbit and squirrel. That doesn’t seem to stem those
populations. I am walking more to observe nature. I was rewarded one morning, a hawk swooped low. I stood still
to watch it – thinking the bird of prey was looking for breakfast in the bush planted between the neighbors garage and front door. I was able to snap a grainy photo of the bird. There was a posted alert that I hadn’t viewed clearly until after I had enlarged the image and it made me chuckle, ”Home Security”