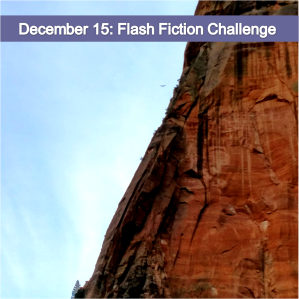 Seeking icicles, I’ve returned to Zion Canyon. Red walls stained with black mineralization are capped with white and pink peaks as the sandstone fades. It doesn’t truly fade; it’s layers of sediment baked in earth’s oven and uplifted in turmoil, or perhaps triumph. Miles up the canyon, a river bubbles out of a cavern and repeats it’s process of carving. Upstream the rock layer is hard and cuts so steep that 16 miles of water touches each rock side. It’s called The Narrows and it’s hikeable, if you call wading and swimming a hike. Perhaps in summer when the desert turns on heat of its own.

For now I zip my fleece and scan the red rock walls for ice.

Each time I return to Zion, I learn something new. The black streaks, for example, are the tracks of rainwater. I can see icicles far up the canyon walls, but none along the trail. It was warmed up on Mars since last week. Closer scrutiny of the icicles reveal they are no longer ice, but white shadows. A new mineralization. Rain leaves traces of black, and ice leaves outlines of white. Ghost-cicles. A third color, that of algae-green pools, has gone missing. Evidently the famous Emerald Pools are not such in winter. I’ve climbed two miles and found nothing but fades.

My quickened breath reminds me I should hike more often. I say so to The Hub and he grunts that walking would be better. Some parts of the trail are so steep I can’t step my heel down, and I climb on tippy-toes. When the trail dips downward I breathe easier, but take tiny steps like a scrambling crab so I don’t slip on the sandy mud that sweeps across the paved trail of red cement. Somewhere along the trail my second wind kicks in and my leg muscles loosen up enough that my steps feel more confident. Never a sprinter; I’m built for endurance.

Disappointed to not find any icicles or gem-like pools, I see the sun lighting up a peak of white that towers like a glowing ember above the walls of red cast in perpetual shadow with the low winter sun. I take a few photos and notice a bird. That’s when the enormity of scale hits me. These sandstone cliffs are nearly a mile high. That I can even see a winged creature that isn’t some gigantic dragon is remarkable. Pines look like scrubs, caverns like pockmarks, and boulders bigger than buses like stepping stones. Until something appears against the cliffs, the mind is willing to believe they aren’t really the tallest sandstone features in the world.

Because I can see this bird and it’s flying near the rim, I realize it must be huge to be seen. A bald eagle? No white head or tail. A golden eagle? Maybe. I watch it glide against the red rock, approaching a fissure in the face. It disappears into a cave. Yet another thing to fade before my eyes on this hike. Ice, algae and now a bird. Eagles build impressive nests high up on ledges, but this bird went into the wall. One bird in all of Zion does that. And I’m once again breathless — this time because I realized I just saw a rare California Condor, the largest bird in North America.

Seeing this soaring giant of Zion brings up an issue of names. The Hub says we saw condors all the time in north Idaho. Another tourist, joins me in the watch and the bird emerges. He thinks it’s a buzzard. Vultures, buzzards and condors are all raptors and different as bald eagles from goldens. Science is specific about how it names species so we get it all sorted out and the three of us marvel at the rare sight.

If only human names were easy to apply and differentiate. Over time, history and historical writers can struggle with names. Take the names Sarah and James. These two names create challenges for me in my writing of Rock Creek. Sarah is the name of both Cobb’s former mistress and his brother’s wife. Cobb’s full name was David Colbert McCanles, and his nickname was Cobb. But no one recorded the nicknames of the two Sarahs. Since one is the protagonist, I kept her name Sarah, and gave Cobb’s sister-in-law the probable familiar name of Sally.

Ah, but the James names are more numerous. Wild Bill Hickok’s full name was James Butler Hickok. He wasn’t dubbed Wild Bill until after the Civil War. Historical accounts say that Cobb teased the young man for his protruding upper lip and called him Duck Bill. But why Bill? One biographer thinks James went by the name Bill, his father’s name. When Cobb’s brother gave his statement and accused three men of murdering his brother and two ranch hands, he was recorded as calling Hickok, Dutch Bill, probably because he didn’t know Hickok by any other name. The one writing out the statement must have heard “Dutch” rather than “Duck.” If you don’t know the joke, Duck Bill doesn’t make sense.

But that’s not all. In addition to James Hickok, the other Pony Express employee on duty at Rock Creek the day of the incident was James Brinks. Brinks also had the nickname Doc, not because he was a physician but most likely because he worked on the steamship docks along the Missouri. He, along with the station manager (Horace Wellman), and Hickock were accused of murdering Cobb and his two men — James Gordon and James Woods. Four of the six men involved in this hotly debated historical incident were named James.

“No single gunfight, with the possible exception of the Earp-Clanton fight in October, 1881 in Tombstone, Arizona, has caused so much controversy as the Hickok-McCanles affair at Rock Creek on the afternoon of Friday, July 12, 1861.”

Families, historians, State Historical societies, books, movies, magazine editors and western writers have all squared off over the years into factions. I name these the White Hat/Black Hat factions because each side believes to understand what happened that day you have to place a good-guy white hat on one and a bad-guy black hat on the other. You can read the nasty digs historians have given one another in their books or articles. I’ve interviewed McCandless family historians who tell me Hickock was short, mean and the devil on earth. I’ve been interviewed by a writer of a modern documentary who only wanted facts that painted McCanles in the worst way possible. Joseph Rosa offers the most compelling account because of his research into Hickok, but he fails to give the same diligence for McCanles.

No one considered the women’s perspectives.

Several historians did take an interest in Sarah Shull (often miss-naming her Kate Shell), but only due to intrigue over a perceived lover’s triangle between her, McCanles and Hickok. And sadly, no one even tried to research Jane Holmes’ name, only known as the common-law wife of Horace Wellman. To understand the Rock Creek Affair, you need to understand the men through the women’s lens. You need to understand the women. This may shock the history of the West, but women had motives, too.

After my own shock of seeing a California Condor in flight (you, too can see the spec in my photo for this prompt), I remembered that what appears and fades before us can have a sort of non-verbal language that is life. We might set out to see one thing and see another. The best we can do is try to name our experience. Names are such a human attribute.  What is in a name?

December 15, 2016 prompt: In 99 words (no more, no less) explore the importance of a name within a story. It can be naming an experience, introducing an extraordinary name, or clarifying a name (who can forget Who’s on First). Go where the prompt leads.

Respond by December 20, 2016 to be included in the compilation (published December 21). Rules are here. All writers are welcome!

His Name Remembered (from Rock Creek) by Charli Mills

Nancy Jane shoveled dirt over her baby’s nameless grave. Her Pa retreated to the barn and more liquor. Hang up that suit first, she reminded him.

That man, that awful man who played his fiddle over the open grave, as if she wanted to share her sorrow uninvited. That man who hauled her father to the gravesite behind his horse all because Pa stole a suit in his drunken sorrow. Who did he think he was to name Pa a thief? He demanded Pa return the suit cleaned and mended. That man. Cobb McCanles.

She’d not forget his name.

Puppy Names (from Miracle of Ducks) by Charli Mills

They bought one of the roan sisters. Trina suggested the name Maria, and Greg countered with Cooper or North. Len from the coffee klatch suggested Buckshot.

As the couple drove off, Danni turned to Len. “Seriously? You’d name one of these girls Buckshot?”