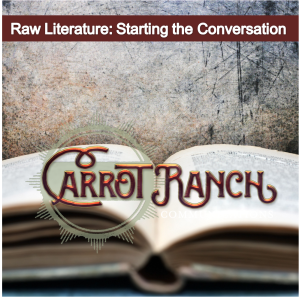 Raw literature is first-works. It’s the original material a writer produces in response to an idea, challenge or aspiration. It’s the novelist’s first draft; the poet’s scribbling of a sonnet; a screenwriter’s initial storyboard. It’s a memoirist’s recognition of a relevant story to share. It’s that ah-ha moment when the imagination outpaces the fingers across a keyboard or a tongue giving diction. It’s the writer’s eye on the blank page like a sculptor’s gaze through a block of marble.

Raw literature is the first lick of flame after flint sparks.

Yet, writers often struggle with words. Not in the sense of writer’s block, but more in the ideas of who they are in relationship to what they do with words. They often resist the words by which they are labeled — writer, author, literary artist. Even the greats, the ones writers eagerly recognize as such, struggle with calling themselves writer. In 1994, back when I started my college work as a student of creative writing, I discovered Toni Morrison, who is a great writer of our era. Back in 1994, despite publication success and critical acclaim, she explained in an interview her own reluctance to say she was a writer:

The word “writer” was hard for me to say because that’s what you put on your income-tax form. I do now say, “I’m a writer.” But it’s the difference between identifying one’s work and being the person who does the work. I’ve always been the latter. I’ve always thought best when I wrote. Writing is what centered me. In the act of writing, I felt most alive, most coherent, most stable and most vulnerable. ~ Toni Morrison, Sept. 11, 1994

What about the work? If we struggle with words as the worker, it’s no wonder we struggle to call our works literary. Are you kidding? Literature is the highest accolades of writing, the works of classic masters we know by single name: Shakespeare, Hemingway, Austen. Literature is bound in leather with titles embossed in gold leaf. But what if I told you that while we struggle with what to call ourselves, we are producing literary art? We are part of a tradition of literature if you consider that Shakespeare was once novice, and that before she earned her Nobel Prize in Literature, Toni Morrison worked for 18 years as a book editor, writing when she could.

Even the masters, laureates, and winners wrote raw literature.

If your medium is language, you are a literary artist. Even writers of raw literature have a vital role to keep language alive and in the mouths, ears and hands of people, everyday people, common people, diverse people. Because in the hands and mouths of fascists, sexists, racists, theists, and those with power over those without, language becomes dangerous, even dead. This is the idea of Morrison, from her 1993 acceptance speech:

The systematic looting of language can be recognized by the tendency of its users to forgo its nuanced, complex, mid-wifery properties for menace and subjugation. Oppressive language does more than represent violence; it is violence; does more than represent the limits of knowledge; it limits knowledge. Whether it is obscuring state language or the faux-language of mindless media; whether it is the proud but calcified language of the academy or the commodity driven language of science; whether it is the malign language of law-without-ethics, or language designed for the estrangement of minorities, hiding its racist plunder in its literary cheek – it must be rejected, altered and exposed. It is the language that drinks blood, laps vulnerabilities, tucks its fascist boots under crinolines of respectability and patriotism as it moves relentlessly toward the bottom line and the bottomed-out mind. Sexist language, racist language, theistic language – all are typical of the policing languages of mastery, and cannot, do not permit new knowledge or encourage the mutual exchange of ideas. ~ Toni Morrison, December 7, 1993

Therefore, our work as literary artists, as writers, does matter. We need new knowledge, mutual exchanges of ideas, and diversity in books. Another great writer I encountered in college was Sherman Alexie. He is a storyteller, poet and Indigenous American advocate. He uses language in books like The Lone Ranger and Tonto Fistfight in Heaven as a medicine shield to counter all the suffering his people, our nation in its worst history, has endured. He deflects, defends and spears truths that makes oppression squirm. In a more recent interview, he also acknowledges the importance of writing in the era of Trump:

I’m not one of those artist-writers who thinks they have any real power. I’m laughing because they’ve already begun the calls for Poets Against Trump anthologies—talk about the most powerless gesture in the history of the world. But what we can do with art is become spiritual boosters. I think we can be spiritually nourishing even if we have no political power. We end up being the equivalent of noise-canceling headphones. ~ Sherman Alexie, December 6, 2016

Alexie is right. We might not hold power against the political forces at hand, but we can lift-up, counterbalance, and use our writing to reveal the perspectives denied, silenced, oppressed. He continues in the article to talk about his podcast, A Tiny Sense of Accomplishment, and how they reached an audience of aspiring writers:

…one of the great things has been how many aspiring writers listened to it, which was great because they got to see us for all of our incompleteness, our struggles, our faults, our doubts, our fears. Jess and I very purposely set out to do the opposite of publicity for ourselves. We talked about the struggle to create something great. ~ Sherman Alexie, December 6, 2016

Even the greats feel like those who aspire. And it comes down to the fact we all begin with raw literature. What if we honored those initial efforts, explored the potential, and examined the process instead of referring to our firsts as shitty. Although, Anne Lamott meant it in a powerful way, too many get hung up on those firsts as a negative which mirrors the perfectionism she’s trying to get writers to break:

Perfectionism is the voice of the oppressor, the enemy of the people. It will keep you cramped and insane your whole life, and it is the main obstacle between you and a shitty first draft. I think perfectionism is based on the obsessive belief that if you run carefully enough, hitting each stepping-stone just right, you won’t have to die. The truth is that you will die anyway and that a lot of people who aren’t even looking at their feet are going to do a whole lot better than you, and have a lot more fun while they’re doing it. ~Anne Lomott, from Bird by Bird: Some Instructions on Writing and Life, 1994

If you’ve noticed my references are from the mid-90s, that’s because I’ve been thinking about creative writing, what it is, and why it matters for a long time. College was my strongest encounter with meaningful process, but we focused on deconstruction and plotting. The mechanics of craft are clearer concepts to teach and understand. It’s the creation of craft that is harder to define. Raw literature is as close as we can come to definition because it is the result of those less definable acts of creative writing.

Prompting, compiling, and writing flash fiction has given me a greater appreciation for the process of sparking an idea into the first-flame of a story. It’s like NaNoWriMo as a tool to generate material, but with less commitment. 99 words is a constraint, but it’s also meant to be short enough to not interfere with your priority work. Many of the writers here have also engaged in writing posts or making comments that express ideas of craft and creative process. Carrot Ranch is a dynamic literary community that produces raw literature weekly as flash fiction. It’s only natural we would write about what raw literature is, who produces it, and is influenced by it.

Thus begins the next phase of development at Carrot Ranch as a literary community. As we prepare to publish our our first anthology, Carrot Ranch is starting the conversation about raw literature. Our anthologies will be more than reprints of flash fiction already published here; they are an evolution of the material developed here and insights regarding the process of using flash fiction as a tool for literary artists. Every Tuesday Raw Literature will post an eclectic and diverse look at what it is, how it is generated, why it matters, and how literature impacts people from different walks of life. Profiles, reviews, and guest essays will further the discussion.

As we work and play with language, let’s get literary and discuss what we write and read, too. It might feel freeing to some, emotionally vulnerable to others, yet this will remain a safe place to express diverse views. We aren’t critiquing the struggle to climb the mountain; we’re trying to understand how the climb makes us feel alive.

This is a guest series. Want to write a review that examines the literary merits of a book? A profile that explores the impact of literature on a person? An essay that examines an aspect of raw literature or the process of creating literary art? Pitch your ideas to the Lead Buckaroo at wordsforpeople@gmail.com. Carrot Ranch is a community-based platform and does not (yet) pay for guest posts. However, you can link back to your own blogs, projects or books within the body of your submission or artfully crafted writer’s bio.

What does raw literature mean to you? How important are your first drafts? Do you pants, plot, or both?