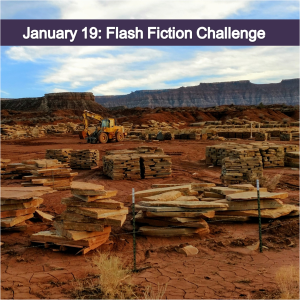 Mars is a mess. Brandy-wine clay smudges the paved roads, making paint brushes of tires. Red sand so fine a geologist might call it silt pours from rock crevices to keep time. When time’s up, entire blocks of sandstone cliffs slough like rocky debris to block paved roads. Constant patter of rain on my RV drives me to drive. Driving therapy we called it back in north Idaho. When life is a jangled mess, when cabin fever settles, when you can’t afford to do anything else, drive.

And drive we do in the white farm truck with the pinkish underbelly, stained by sticky wet red clay of an unusually wet southern Utah winter.

We can’t go up. Kolob Terrace is closed, choked with snow at its elevations. The mesa roads are unstable. The clay roads are impassable. Zion Scenic Drive is  closed. We can’t go far. The truck guzzles gas and we are back to living on a writer’s budget. That miracle of a job wasn’t such a miracle. The anxiety of living homeless, moving 1,000 miles in a leaking tin can, losing our big brown dog, and finally getting diagnosed with combat-related anxiety after 33 years left the Hub ill-equipped to deal with office politics.

Tourists flesh the bones of this place, visiting Zion in the thousands daily. Tourist season is March through November, and the three months of winter are quiet enough to enjoy the park when not beneath tumbling debris. Park rangers are more evident. Locals in the Virgin-Rockville-Springdale area are friendly. We feel out of place though, like Earthlings on Mars. We can’t go north yet because it’s buried in the tundra of winter.

Along the flat and recently graded dirt road we encounter an unwelcoming sub-culture — tweakers making, buying or simply driving the back-country of Mars to use crystal meth. We had one move into the RV for the month of December, as we waited, a full month, to hear the decision of the Hub’s employer. We watched muddy vehicles come and go. One day an unmarked police vehicle showed up and the next day the tweaker was gone. I hadn’t realized how tense it had made us until they were gone.

So we drive. Clay crackles where rain had saturated it three days prior. Our drive is the one sunny afternoon in between storm systems. The road crosses the red and swollen Virgin River and I think there’s a metaphor between the condition and its name. But inspiration fails to make the connection. We drive. Carefully we wind up a serpentine rise, avoiding grand puddles and washed out gullies. A small SUV is stopped pointed the direction we are coming from, and the Hub rolls down his window to talk to the woman getting out the driver’s side door.

“The road. Is the road clear?”

“Uh, um, yeah, uh, yeah.” She pulls out a walkie-talkie and ignores us.

The Hub rolls up the window and we both realize she’s high on something. Two pre-teens look bored in the back seat. They don’t make eye-contact with us. Silently I hope they both grow up knowing a different life. Yet, I’m not so sure I believe in clean breaks. Even in this desert known as Mars, we’re all dragging around cumbersome crates. Moody with my thoughts, I’m curious to see mounds of tailings, often an indicator of a mine. Not a mine. We drive around the wide curve in the road and see a quarry.

Flat rocks neatly stacked reminds me of the pressure I feel when I think of life’s pain.

As a writer on a drive is wont to do, I begin to think of my characters. I’ve switched to Rock Creek as my writing focus this week, among blog posts, social media and client work. On the red road I can think of my characters without the rocks of deadlines and news articles. My imagination finally bubbles up and rolls muddy like the Virgin River. Mary. Mary Greene. Mary Greene McCanles. She’s neat like the quarry rocks. Orderly. Sarah Shull was neat, too, but dreamy. Mary was pragmatic. Sarah could account. Mary could make any household item her family needed, sweep a dirt floor and balance all the babies. Sarah was progressive, Mary traditional.

Like politics, my two lovers of Cobb McCanles were polarized. Yet where is the tension in my story? Mary is the wife he cheated on, Sarah the mistress he brings to Rock Creek. Yet Sarah is a business partner, the sullied and pitied woman. I get Sarah’s complexities, I can define each stone in her stack. But Mary? She cooked and cleaned, cleaned and cooked. This is exactly why I write about women in the west because I know we are more than that. We cook, clean and meet up with drug dealers before driving the kids to Scouts meetings. What is Mary’s drug? What is her boredom? Her fear? Her pain? More so, what does Mary do with it?

We drive and I imagine Mary vindictive. She wouldn’t look at Sarah Shull without some bile rising. Corn liquor was for her man. Mary planned, poking her adversaries weaknesses. What if Cobb was not the one who made the women get together for dinner exchanges like historians claim from eye-witness accounts? I’ve entertained the idea before that Mary initiates the dinner exchanges to shame Sarah who never learned to cook. What else would she have planned to make Sarah look bad and elevate her own status? I realize I’ve been reluctant to sort out Mary’s stack of rocks, accepting she was the stoic pioneer woman, respecting she was my kin. I feel soft toward her.

And we drive and I get hard of heart. If there is anything worth sifting, I’m going to have to get hard with Mary, see her as a real woman, strong, but fallible, too. Mars is a proving ground. As a writer, I have to pick at the quarry and create characters like stacks of many rock, each one applying more pressure.

January 19, 2017 prompt: In 99 words (no more, no less) write a about a quarry. It can be a place or include the the by-product. The quarry can be operational, abandoned, it can be in real-tie or mentioned from another time. Where will the quarry take you? Go where the prompt leads.

Respond by January 24, 2017 to be included in the compilation (published January 25). Rules are here. All writers are welcome!

At First Sight (from Rock Creek) by Charli Mills

Mary swayed like corn in a cradle, the wagon rocking, creaking. Her back ached and hands cramped as she drove the team. Ahead Leroy sagged with fatigue in the saddle.  A full moon guided their final push to Rock Creek. To keep alert, Mary forced the first memory when she became interested in Cobb.

The mountain girls gathered at the creek, wading and gossiping. Sarah Shull hung back. Her cornflower blue eyes watched the trail from the granite quarry. He rode shirtless and reckless. Mary smirked. She recognized the twit’s crush. That’s when she decided to woo Colbert McCanles.