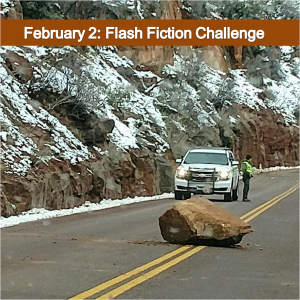 Hills old as dirt. Rocks ancient as time. Mesas drawn from memories of dinosaurs. It’s old around here. Solid as a rock.

Hillsides mess with our sense of time and solidity. Geologically speaking, the wrinkled hills of debris at the foot of mesas and canyons in Zion National Park are newborns. Water carves rivulets into canyons so deep and serpentine that many of these winding features miles long went unnoticed by surveyors for years. If you believe the canyons rock-solid, I have some alternative facts for you. But before we get to fiction, let examine a few facts from science:

The Zion features are not alive with music; instead they pulse with mud-pushed rocks, reshaping debris heaps. The process accelerates any time water joins the mix. Mud becomes a powerful sludge, and sometimes entire hillsides calve like a glacier. Other times a trickle of rocks tumble across trails and roads.

And some times there’s a rock big and brown in the middle of the road.

Geology reminds me that life is not static. We never have the same day. We never truly have an ideal image of ourselves in the mirror. We never fix the meatloaf exactly the same way as last year. Even the institutions we believe unshakeable are not the same from year to year. Everything shifts and sheds like Zion rubble.

Mostly the process equates to the movement of sand. It’s over the years we notice the ravages of grain — the days’ activities are noticeably different; the face in the mirror has aged; meatloaf had a makeover; governments erode. Sometimes, though, the rock crashes down in an instant and we are shaken by the change. We prefer the illusion displaced sand gives us. Sand seems easier to sweep away. And we do. But that rock — that rock in the road cannot be ignored. It calls us to change or be changed.

Rocks always take us by surprise. We know they exist in the sludge of life, but we always believe we can dodge the big ones. We do what we can to avoid the dangerous slopes where we know rocks lurk. One might acknowledge vulnerability. How often I’ve heard many people say, “I know, I know, we’re all just one paycheck away from being homeless.” But that’s just a fear many use to stay in an unsatisfactory job, town or relationship. We settle and take our chances with the sand, avoiding rocks.

When it does happen to someone — that rock of homelessness — we shore up our own crumbling edges with notions that the person struck by the rock of unexpected change must have done something. “That’s right, they asked for it. They were digging where they shouldn’t have dug.” People say those things to justify walking past a panhandler on the street. They justify not giving money because it would be spent on drugs or drink, without thinking to buy a meal or a blanket. They justify dehumanizing the homeless.

Let me introduce you to a few faces besides mine. There’s the divorced woman whose husband hid the assets and at 62 she has no employability. There’s the man and his wife and their two sons who can’t come up with first, last and deposit on a rental so they camp while raising the money that never seems to be enough. There’s the woman kicked out of a motel room after the landlord beat her. He. Beat. Her. She lost her room and now sleeps in a tent a church gave her. There’s the veterans in their trucks, belongings piled in the passenger seat and a bed in the back beneath a camper shell.

And the boy with the big grin blowing out seven candles on two cupcakes for his birthday. He’s in his third shelter, or transitional motel room. The rock that hit his parents was an unrenewed lease. The apartment complex preferred adults to seven-year-old boys with no where else to go. Once you have no where else to go, the complex web of family homelessness awaits like Shelob’s lair. More rocks dislodge — most shelters separate men from women and children; shelters have rigid rules that interfere with jobs; some shelters have a lottery system. There’s long-term motels with their own set of dangers and frustrations.

This boy’s mama dreamed of a kitchen. She dreamed of cooking. I know, Sweet One, I know. I miss my kitchen most. I miss everything that a woman creates in a kitchen —  meals and memories. Sweet One is a daughter to me. I’ve known her for nine years, ever since she was a teen working where I worked. I respect her privacy, but I want you to know this is a good woman, a good mama. She and her family got hit hard by one rock after another and they do not have the normal familial safety net. Adult orphans.

That can be hardest, which is why I asked her if the Hub and I could be Nana and Papa to her boy, Our Boy.

After six months, Our Boy, his Dad and Sweet One got an apartment. Our Boy has been doing well in school, although he had some scary days when he was taking public transportation to school, arrived late and got locked out. A seven-year-old alone in the city! Sweet One nearly lost her mind over that one and the school worked with her to make Our Boy safer in his transitions. Think about the dedication of these working parents to get their son to school every day. Together we believe in him going to college.

Carrot Ranch is hosting a Welcome Home J-Family house-warming for Sweet One and her family. Between now and February 28, there will be a Wish List on Amazon for the family. When families become homeless, they often lose most their possessions. I’ve heard people say, “It’s good to purge.” But unless you’ve had to get rid of your personal and household belongings, you couldn’t know the sorrow. Or the frustration when you want to cook after getting re-homed and are missing what’s needed.

At first Sweet One was modest and asked for three items: microwave, muffin pan and a crock-pot. After some nudging she got into the spirit of dreaming! She and Our Boy dreamed of waffles, zucchini zoodles and omelettes shaped like hearts. Then she thought out how to set up her kitchen, and I added cookbooks. Could I ask you to share this house-warming far and wide? If you can, and are moved to help one who got hit by the homelessness rock, consider buying her an item on her list. Her son is seven if you want to send him books, too. Let’s give them a landslide of a house-warming!

It was hard for me to think about my character’s homeless event this past summer even though I knew I wanted to hit Danni with that rock. I had already written a scene where she is unable to access Ike’s account right after he leaves for Iraq. Often these banking issues arise and when the spouse is deployed, they can be tricky to sort out. Using my own experiences and understanding of how easy it was for banks to foreclose on military families, that becomes Danni’s event.

Seeing what is happening in our government seems like a catastrophic event in the US, but some of us had earlier hits to know the whole thing had become unstable for those not billionaires many years before the orange rock hit DC. Although why those hardest hit would elect a demolition man to office seems counter-productive. Maybe they just wanted to see a rock-slide hit everybody else, too.

February 2, 2017 prompt: In 99 words (no more, no less) write a story about a rock in the road. It can be physical, adding to a plot twist, or it can be metaphorical for a barrier or hardship. Go where you find the rock.

Respond by February 7, 2017 to be included in the compilation (published February 8). Rules are here. All writers are welcome!

Midnight Rock (from Miracle of Ducks) by Charli Mills

Michael knelt at the bumper, shining his flashlight. “Hell of rock you hit, Danni.”

“It was an easy target, squatting there in the middle of the road like a legless grizzly.”

Michael shined the powerful light up the canyon wall. “Can’t see anything else unstable.”

“A rock just for me.” She slumped her head on the hood. “Ike loved this truck.”

“Yeah, Ike’s in some hell-hole, pining for his truck!”

“He’s enduring because of what he has back home, Danni. You, the truck, the dogs.”

“Too bad he won’t have a home to come home to.”