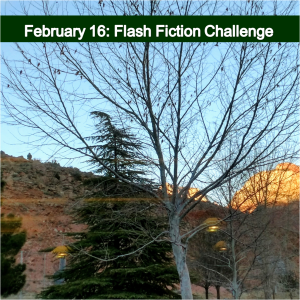 There’s a juniper tree on the slope of scree between my view outside the library window and the cliffs of Zion Canyon. The juniper is the size of a person, and each time I glance out I think someone is there, watching me. I’m torn between my inside world of words and my outside world of nature. A person on the periphery of both is startling. As if this Juniper Tree Watcher can see through to me.

I’m not paranoid. I use aluminum foil for BBQing, not blocking nefarious satellite spying. Honestly, I don’t feel watched in that sense. I don’t feel the need to wear hats in public to hide my face from Big Brother cameras or apply duct tape to the video cam on my lap top. Seriously, if anyone is watching me as I write, they have weird clips of me contorting my expression in frustrated pain when internet feeds are slow, deep breathing, arm/shoulders/neck exercising, or drooling when in a daze to flow thoughts from the head to tapping fingers.

The worst Big Brother can nail me for is one-handed keyboarding and scratching my nose (it was just a scratch).

I’ve long known the NSA is watching my email and blogs and bank accounts. The NSA alerts come from Idaho neighbors who’d come over for coffee and the latest conspiracies. I don’t doubt the government is watching, but doing something with that data is beyond their abilities. Try getting VA care. They have tons of data. They lack resources.

Once, when I was 12, a Native American elder warned me about water babies and watchers. He described a place where the Washo knew the watchers to be. It was a spot I avoided because my horse snorted every time I rode past this low bit of land along a creek. My friend said my horse recognized the watchers. I began to think about other places I felt watched, yet another correlation emerged: history.

Feeling watched became a clue for me to look for historic or even pre-historic evidence of habitation. I got so good at it that I recorded 11 archeological sites around the town where I grew up, including the spot I had been warned about. Of course I learned to identify features and clues, but that sense I feel, like a hunch, also feels like being watched.

The top of Dalton Wash felt like a hunch the first time we crested the mesa. It didn’t take long before I found chippings and tools, indicative of an encampment. Subsequent times I’ve been back, I’ve brought loose tobacco to share, a gift to the ancients my Native friends taught me. The first time I brought tobacco, I had the hair on the back of my neck stand up at a certain point. I felt I should not go past and I left my gift there on the wind.

I’ve been asking around, to fill in the gap between knowing this place was once inhabited and wanting discover their story. Some of the rock shops had said the Shoshone and Paiute lived and hunted here. It didn’t feel like my watcher, though. Then I discovered a small warning to hikers on the Zion side of the mesa above Dalton Wash — leave rocks, petrified wood and artifacts behind for others to enjoy; do not climb or disturb the rock dwellings.

Rock dwellings would mean Pueblo or even the mysterious Anasazi. I began asking outfitters and all were reluctant to say anything more than the park doesn’t want people to know in order to protect the ruins. In a round about way they confirmed the existence of ancient ruins in the vicinity where I felt watched and compelled to leave tobacco.

Whatever the feeling is, it taps into my imagination. Of course, a logical explanation would be my mind attempting to fill in the gaps it doesn’t know. I could agree with that. When I was younger I thought an archaeological career would be the greatest ever. I had always wanted to write historical novels and I saw the possibility of being an archaeologist/historical fiction novelist. It was beyond what I could do at the time, and college was not part of my family dynamic. By the time I got to college, I was a mother of three. Practicality dictated a teaching profession, but history and creative writing called my name. Creative writing called the loudest.

When I started writing Miracle of Ducks, Danni came to me as Dr. Danni Gordon, an historical archaeologist. She disdains dogs until her husband Ike abruptly decides to serve a private military company in Iraq. She has to overcome her dislike of dogs and Ike’s best friend to hold her life together in Ike’s absence. She ends up finding a friendship and a pup, and eventually she even finds her community after believing she never needed to be part of one.

The friend, Michael Robineaux, is the perfect foil for Danni’s career — he’s Ojibewe. He frequently challenges both her profession and disbelief in the supernatural. While the plot doesn’t get too “far out there” there is a thread of supernatural regarding the pup, Bubbie. Most of it is easily explained away like my sense of feeling watched by those who’ve gone before, but there’s several incidents that are left to the reader to decide.

The community element was something I originally set up to contrast Ike’s commitment to duty and Danni’s need for solitude. Community is a dynamic force, and complex. Miracle of Ducks drills down through the layers until Danni can finally see her own placement and come to understand why Ike would feel the need to put himself in harm’s way.

Last week I had a huge breakthrough in revising. I’ve mentioned before that I’m changing the setting from northern Wisconsin to north Idaho. One chunk of story that I wasn’t sure how to transfer involves Bubbie getting lost on Madeline Island. There is no such place in north Idaho, although several peninsulas on Lake Pend Oreille might work. Last week, I responded to the prompt and was thinking about Danni’s angst over her missing pup. In my original scene, Danni and Michael spend days searching for Bubbie, following up on sightings including a farmer who finds the pup in his hen-house.

Without thinking, I wrote Bubbie was lost on the Pack River and a group of rednecks shot at him for sport. Suddenly, the transfer was complete in my imagination. I could see Bubbie getting lost on the Pack (many dogs do each year) and the dangers became real and unfolded. I’m biting at the bit to get this scene rewritten now, thanks to the insight from that flash. Sometimes, my own responses to the prompt are like a flash light showing the path in the darkness!

I hope to find that ruin above Dalton Wash before we leave Mars. We don’t know where we are going next, or how we are going to move our RV, but I hope we get a flash of insight before the snowbird season ends, early April. Like a good story, I know something is up on Dalton Wash. It interesting to note, it’s not the only Anasazi ruin in the area.

The other is beyond the slope where the Juniper Tree Watcher stands.

February 16, 2017 prompt: In 99 words (no more, no less) write a story that includes a watcher. It can be a sentinel like the Watchman formation that overlooks Zion Canyon, or a Big Brother conspiracy theory. How can you use a watcher to set a tone or present a twist?

Respond by February 21, 2017 to be included in the compilation (published February 22). Rules are here. All writers are welcome!

Falling Shadows (from Miracle of Ducks) by Charli Mills

The Beehive was where granite met duff and towering larch. Hikers said they saw a dog like Bubbie run up the trail. She swore she saw dog-prints by the spring. Nothing. No Bubbie. Just a warm breeze through the pines.

Looking up, high on the granite mound considered sacred to the Salish, and called the Beehive for its shape, Danni could see the shadow of a dog. How did Bubbie get up there? She’d need a rope to ascend.

Her breath left her as the shadow fell. Before impact, it spread wings and an eagle flew away.

By Charli Mills in Flash Fiction Challenge on February 17, 2017.
← The Murky Side of the Rainbow Times Past: 4-Wheeling the West →