What had been murky pools a few weeks before are now flats of cracked mud. The kind of cracks that call to be pressed with the toe of a boot. It’s like nature’s original bubble wrap. You know, the kind you can snap and pop?

I’m walking down a desert road with ruts that have dried to resemble molded plastic. It’s not so dry yet that it’s dusty, and I know the moisture of an intensely wet winter in southern Utah (Mars) will bring an explosive spring. Already the desert has a different hue from when I first arrived in early September when temperatures were still topping 100 degrees Fahrenheit.  It was dusty red beneath blue sky with faded brush.

Ahead of me, a rabbit runs from mesquite to sagebrush, both which are green. Not grass green. Sage is silvery blue-green and mesquite is dark like pine needles. I look to yucca plants and prickly pear, hoping this landscape transforms with flowers as only a desert on Mars could bloom. Until then, I hunt for spring-signs and rocks. There’s no rocks of interest on this plane beneath the shadow of Hurricane Mesa. So I look up.

Was this area where the monkeys landed?

Beyond my focus, I can discern something white at the edge where I know the tracks aimed off the mesa to launch test monkeys in test ejection seats. I imagine a monkey in a pod drifting slowly overhead, its parachute white as the snow that lingers to the west on the Pine Mountains. If I can see the ghostly memory of the past, what else can I see? Shoshone boys chasing rabbits, a Mormon wife hanging laundry. This would have been a safe place to live, high enough above the flash flood washes, close to sources of water, flat for a house.

And there are foundations. I kneel to examine the rock foundation of a home or barn. Old chunks of seasoned beams lie scattered. A tangle of wire rusts near tracks of modern all-terrain-vehicles (ATVs). Broken glass glitters. Upon a closer look, the glass is modern. A strange pile of old debris, as if a homestead had burned. I poke around and find slag: cobalt blue streaked with white as pure as monkey parachutes; green like grass that doesn’t grow here streaked with black; golden and brown.

What were these remnants? Its not clear like bottles,  more opaque like iron slag, yet way too colorful. A desert mystery from a kitchen long ago on the spot beneath an Air Force test site. How strange when life is like multiple disconnected plays that share the same stage over and over. Eventually, the stage changes, but not as fast as the flashpoint of a human life or the drift of a flying monkey.

It’s been a long journey for me to get to this flat stretch of ground, picking up the slag of my own life. Like these transformed pieces, I’m changed, too. I’m not as polished as I once was. My edges are sharper, my color deeper. When I set out to conscientiously write a novel about the spouse of a veteran who decides to return to Iraq in mid-life, I wanted to explore why soldiers serve. Perhaps in the beginning of exploring service, I had high ideals of duty. I knew my husband was closer to his Ranger brothers than any other friendships or even family ties. And he has lots of cousins and hometown friends.

In fact, I think that day last summer when we finally got the Hub in front of a VA psychologist for an assessment, I realized something deeper about all those relationships he grew up with. In describing how easily he was friends with people, I nodded. The Hub never meets a stranger. But when pressed about his service and specific events, it became clear how detached he became from those formative ties. After service he was changed. Anger became a low-burning fuel that propelled him through life. Others describe him as intimidating. I learned (as did our three children) that he’s all bluster. He’s not dangerous or frightening, but that doesn’t change perceptions in the workplace. All these years he’s had us, his past ties and his Ranger brothers. Yet, he’s still on mission.

Duty isn’t to country and service is not driven by an ideal. He’d die for any one of his Ranger brothers, even now, and he continues to keep my perimeter safe and drive defensively. Why would he go back to Iraq if he were my character Ike? Training.

When you are in an elite force, you use your brain, brawn, morals and emotional strength to train. It’s important to understand that after all these years of seeing cracks in my husband’s behavior that it wasn’t simply PTSD. He does have PTSD, mild, as numerous evaluations state. As he describes to me, PTSD is merely a survival trigger to push a person into fight. The elite forces are not populated with flight responders. It’s the extreme training in this heightened survival mode that becomes like a switch turned on. And they want to do their mission. They train for their mission. They protect their brothers on mission. They dream of home; idealize it, but can’t stand to be still in it. They want to go on serving.

The Hub was diagnosed with severe anxiety disorder just weeks before we came to St. George, Utah for the job that didn’t work out. It had no chance of working out. We had so many stress factors going on, stemming from our bout of homelessness, that his anxiety was off the charts. I never thought of my husband as anxious until I realized what it was. The gruffness, the anger, the mistrust of authority, the refusal to let others walk over the top of him, the idea that others wanted to walk over the top of him and not recognizing how work-culture behaves. That training to do the mission no matter what has created a beast of anxiety within him. Serving in Iraq would relieve it.

But that’s not the answer. Unlike my character Danni, I said no way. Instead I kept my husband home, but he grew more restless and frustrated, detached and demanding. I was certain the behavior stemmed from undiagnosed and untreated PTSD. I also believe (and this is pure opinion) that the high rate of veteran suicides in the Hub’s age range (over 50) has more to do with longevity of suppressed PTSD, anxiety or depression from service than anything. Younger soldiers undergo readjustment therapy and the VA offers programs my husband never had. Yet fighting for VA service can be a battle of its own, and I can’t tell you the number of times I’ve heard veterans and their doctors minimalize their disabilities. Wiser veterans and advocates in the system warn other vets against “soldiering up.”

It took four years to get the Hub to “soldier down.”

By the time we got the diagnosis that leads to the care, we moved to Mars. To this date (March 2017) the Hub has yet to receive a primary care physician in St. George (and he’s been requesting one since September 2016). When he was placed on unpaid temporary leave, he was shocked and I was angry. Angry because I knew he was reacting to his anxiety poorly and the reasons cited for his eventual dismissal were related. I helped him write a letter to his employer asking for legal accommodations to his service-related disability. It was ignored. I called the VA and said we were in crisis. No one called back. I called the director and had a response in 15 minutes, an appointment the next day and a referral for CBT or EMDR.

And not even that came easy. Although we are taking classes and doing group therapy, the Hub’s first individual appointment was two days ago. Mine is tomorrow. I’m actually excited. Rarely do spouses or family members get mental health care or support. The Vet Center does allow for it, but they’ve been short a therapist. Poor woman arrived Monday and me and numerous other spouses from couples group therapy for vets with PTSD are ready to beat down her door.

We are slag forged in the fires with our veteran spouses, and want to fully transform into something of beauty and purpose.

We are the home-makers and although I aspire to be more than that with my own individual hopes and dreams, the home-maker role is as important as any.

And I have an update on our young and dedicated home-maker, bank-teller and overall Sweet One with her family’s new home after living in shelters and cheap motels. Her son is doing well in school, and thanks to all the books we collectively sent (I’m sure it was writers who sent books!) he has discovered a joy of reading. I’ll be certain to keep that joy alive.

Sweet One wants to thank all who sent house-warming gifts and to say she is cooking dinners for the family, making her first pot of chili in a crockpot. I had to laugh when she soaked the dry beans overnight and then texted me her concern the next day — are beans supposed to smell? I’ll keep fostering that joy of cooking.

For privacy, I can’t share full photos, but Sweet one approved these to be shared in a thank-you to you all:

How can I thank you and your friends for everything?? Hosting the welcome home party and all the wonderful and amazing beautiful gifts??? Thank- you just isn’t enough.
I’m overwhelmed…. And both of the guys are as well. J LOVES all his packages he gets, but last night a tie between both the tupperware and crockpot he helped me pick out. If possible more excited then I was. It was SO funny and cute we were both doing our happy/ excited dances and he was happier than I was about them!

Thank YOU ALL SO much for everything and ALL the love in each and every package. 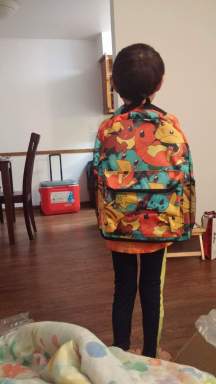 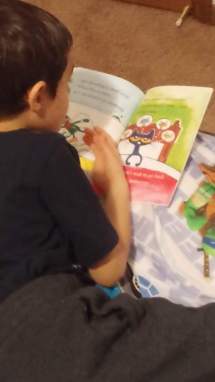 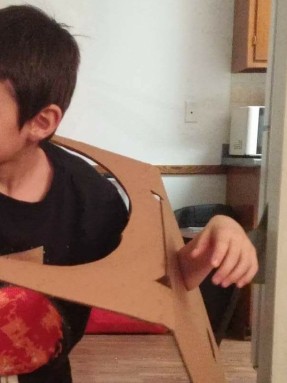 March 2, 2017 prompt: In 99 words (no more, no less) include slag in a story. Slag is a glass-like by-product of smelting or refining ore. Slag is also used in making glass or can result from melting glass. It can be industrious or artistic. Go where the prompt leads.

Respond by March 7, 2017 to be included in the compilation (published March 8). Rules are here. All writers are welcome!

Evidence of Existence (form Miracle of Ducks) by Charli Mills

Danni knelt by the fire ring, rain dripping off her oiled hat. No campers remained, and she surmised the last ones had children with chalk. They left stones colored with pastel hearts. Layered coals hid what she sought. Digging with a stick, she unearthed a piece of glass Ike had broken when they last camped here. She couldn’t explain why she wanted the slag. She was an archeologist, proving existence of human habitation. She wanted to prove Ike had existed. G-Dog barked from the truck, bringing her attention to the dogs.  Hers now.

The slag would outlast them all.