Home » Flash Fiction Collections » Out of the Fire

Out of the Fire 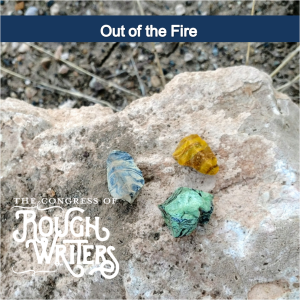 Slag comes out of the fire as a by-product of industrial or artistic alchemy. Iron produces a rough glassy silica and molten glass creates colorful mixtures. In this raw state it has potential. In humans, another definition implies trash as in a lewd or promiscuous woman, and carries a more destructive meaning.

No matter the interpretation or tone, writers went where the slag prompt led them. And it makes for an interesting collection, this week.

“We need to go over there!”

“Not according to the directions!”​

The argument was consistent on any geocaching trips they made. This was their fourth trip to the area, an old mining town back in the day. They stood at the end of the trail overlooking mountain meadows and rocks. The GPS on their phones said they were close.

The realization they were standing on the old slag pile from the mine. Mountain grasses disguising historic remnants of the cache left behind. Mother Nature showing off what she’d accomplished over the years, reclaiming the once murky tailing pond nearby.

You could see it for miles, this landmark in time, rising up on the horizon as you turned the corner.

Some called it an eyesore, some saw it as a monument to times past, but passing it meant I was twenty five minutes from home, where Love, a cup of tea and a warm bed waited for me.

In my time, it was called Slag Hill, but within ten years, it became just The Hill.

It’s gone now, moved or used for heavens knows what, and the landscape is flat and featureless.

Evidence of Existence (form Miracle of Ducks) by Charli Mills

Danni knelt by the fire ring, rain dripping off her oiled hat. No campers remained, and she surmised the last ones had children with chalk. They left stones colored with pastel hearts. Layered coals hid what she sought. Digging with a stick, she unearthed a piece of glass Ike had broken when they last camped here. She couldn’t explain why she wanted the slag. She was an archeologist, proving existence of human habitation. She wanted to prove Ike had existed. G-Dog barked from the truck, bringing her attention to the dogs.  Hers now.

The slag would outlast them all.

A Faultless Piece by Michael

She poured over the slag heaps looking for that piece that was the shape she required, the textures and colours needed to create the perfect article of jewellery.

Her fingers combed the debris that was left from the old iron foundry. She’d been lucky a few times in finding just what she wanted.

Many were contemptuous of her work. Said they were pretend trinkets. Gaudy, ugly fakes. She paid them no attention when they slagged her off ridiculing and jeering at her attempts to make some needed finery. One day she’d show them when she found that faultless piece.

Oh, thank God you found it. ” Jane’s hands shake as she fumbles with the clasp. A stroke of good luck, that she lost it at work.

“Look.” Jane holds out the pendant, an iridescent greenish-goldish-brownish cabochon glowing as if from within. “Slag glass, it’s called. We found a bunch in a ghost town that had burned. My grandpa made jewelry out of it. He made this.”

The cleaning woman sniffs. “Doesn’t look like so much to me.”

“Yeah, you’d probably rather have diamonds, like everybody else,” Jane snaps.

Their skeletal remains were found in the hidden attic room of their Victorian home. She was wearing glass slag amber earrings, necklace, and an evening gown with amber slag gems sewn on.

A note on the bed-side-table, held in place by a priceless Victorian amber slag glass lamp, read:

My husband fancied he was like King Midas and everything he touched turned to gold and became his property, like me. I thought his blood might be amber, but it was bright crimson.

He would have been pleased it was his favourite slag amber lamp which had cracked his skull.

My Slag is Not Your Slag by Joe Owen

Karina twisted in front of the shiny 5 x 5 sheet of slag. Allie smiled while watching from her register at the door. It’d be great to sell the sizable piece of art, but her hopes were slim.

“I need to convince my husband” she said covering her cell phone as she neared the station.

Karina felt the swell of optimism, but breathed it out just as quickly. Being in the business meant disappointment was more often your closest friend.

“If you could see my reflection you would agree. I look like I did in Aruba,” Allie said. “Buy it? Okay!”

The Heirloom by Kate Spencer

Jim wiped droplets of sweat from his forehead. He and Gladys were spending their Saturday cleaning out the attic and reminiscing over silly items they’d found in boxes.

“Looky here Jim. It’s my great-grandmother’s Diving Dolphins bowl,” said Gladys holding up a purple dish. “I remember my Granny loved it. She always had gumdrops in it.”

Jim reached for the artefact. “Wonder how much it’s worth.”

“Looks like a rare piece of slag glass to me. I’d like to keep it. I’m thinking that some ol’ things are worth keeping around.”

The box itself was a treasure, with its iconic graphics and rich smells, the hinged lid bestowing sanctity. Inside were her rare and special collections, including molten glass, twisted and smooth from a long ago fire; and the purple hued, cratered rocks that were surely meteorites, come to earth from the far off spaces between the stars. Later, when she was older, she would also keep a small notebook in that box, her foundry where she tried to forge something of enduring value. Later still, though she realized it was all slag, she continued to treasure these precious artifacts.

I struggle to find what’s real.

I’m picking up sounds—buzzing and static. I think they’re trying to talk to me. Or maybe it’s me saying something. My words are lost in a haze of unrest.

My mind feels like melted glass, being stretched and twisted into something I don’t recognize. If someone were to put my mind on display, it would be unsightly and puzzling. I hope it doesn’t turn out that way. If the glass can be manipulated as easily as pulling taffy, I think it can be made into something beautiful and useful. Perhaps a vase.

Henry’s head drooped until his chin rested on his chest. His scribbled calculations littered hundreds of pages and filled notebooks. He’d scoured creaking tomes thick with ancestral dust for research, divining ancient secrets for alchemical experiments. Flames flickered beneath miniature cauldrons and beakers. Metals melted into liquid luxury, but none refined as he wished. Just beyond the glow of his workspace, whispers populated the shadows. “He’s close, but he ignores the elemental marriage.” “They never realize the steps they miss in their haste.” With a wave of demonic hands, the metals produce not desired gold but slag and disappointment.

Pushing the goggles back on her forehead, she waved away the acrid smoke and smiled. Number nine hung from a slender wire, shards of red, yellow, and cool blue joined at their edges and reinforced in their many corners with spare strands of lead.

This was indeed her best spell, one that might save the shire from the Goblin Raiders. She hung it in the shop’s doorway, next to the other eight stained glass salmons. They rotated and collected the full moon’s light.

She brushed the slag into her hand, blowing the remnants, and a prayer, towards the fjord.

Setting off at dawn Joshua and Darryl picked their way up the side of the volcano in silence.

“I’ve never met anyone with such a revolving door as Rhonda. The other night I saw Henry and Peter both visit.” Joshua broke the stillness of the morning, puffing out the words venomously as they neared the rim of the volcano.

“Why don’t you mind your own business?”

“Just think you should know you’re sweet on a woman with ….”

“Look at this slag,” Darryl interjected pointing at the scoria remaining after numerous volcanic eruptions. “look at those colours. Beautiful……. like Rhonda.”

Reunion of Innocents? by Jules Paige

Clementine anxiously waited for the 5:40 out of the city,
wondering if he would be on board…How much would
he have changed?

Takes time but the crescent moon morphs to full ~
Even the exotic afflatus jailer teasing the pasty longanimity
held captive with stew cooked with mouldy bread ~ will get
his comeuppance, Clem thought.

Thomas Glas had little light from the ledge of a barred window ~
Cringing at every noise trying to filter night from day…The slag
of his wrongly imprisoned heart may not form a diamond, but
an emerald was just as good…for her.

As my knuckle approached the musty old door, my outspoken personality fled into the background. No! I must get this over with!

“You wanted to see me Professor?” I asked.

“He is developmentally disabled.”

“I’m in your slag heap, too. Mine’s called Dyslexia, you just can’t see it.“

“Students,” he sneered, pointing toward the exit.

I opened it, allowing the university president inside.

The Good Girls by Anne Goodwin

They spat that name as she shivered down the corridors, taunts that slapped her ears. They were the good girls with glossy hair and proper parents, while she was ….

It hurt the first time. And the second and the third. But he bought her stuff she needed, and drugs that made it hurt a little less. He promised to protect her. Until he didn’t.

Next time, she’d call the shots; the good girls could call her what they liked. After all, her body was built for pleasure; it was time she took some for herself.

Shelley has moments when the torture of her teens rises up in the wee hours.

She doesn’t scream out so much as squeal the pain.

But no. It is that distant time intruding.

“They made me into something I wasn’t,” she has told me repeatedly.

I remember my school days, the things I said, carelessly, cruelly, about others.
I’ve tried to tell her how small I once was, am no longer, I pray.

“Words… like rats-teeth. They never stop gnawing at my soul,” she has cried.

My sister called to say that Dad was terminally ill, and we should go see him once. Mom was happily settled with her second husband and kids, and would not bother to check on him.

Just before I left, I kissed my daughter in between her play, and invited protest. She wanted to be left alone.

“Sure, darling! But Mom and I will always be there for you.”

I could give anything to provide her the snug comfort of loving parents. I could not ever forget being referred to, by both of them, as ‘slag’, from their failed relationship.

The Artist by Norah Colvin

They, each with a single colour, used packaged accessories to form identical sets of flat, life-less shapes. He worked by hand, collecting and incorporating their slag, as he explored the properties of his clump of multi-coloured dough. They proudly displayed neat rows of unimaginative templated shapes. With humble satisfaction, he regarded his creation with its countless possibilities. Each time they started again, they repeated the same familiar fail-safe patterns. Each time he began anew, exploring, seeking, discovering the dormant, hidden potential, sculpting to allow uniqueness to shine. They remained stuck in what is. He focused on creating the future.