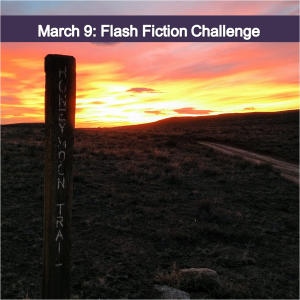 “Well, I’m standing on a corner in Winslow, Arizona and such a fine sight to see. It’s a girl, my Lord, in a flatbed Ford, slowin’ down to take a look at me…” wrote musicians Jackson Browne and Glenn Frey. The song went on to be a classic for the Eagles: “Take it Easy.” That iconic opening was one Jackson Browne struggled with and Glenn Frey assisted by adding the second line as a joke, as a first response. But you know what? Sometimes it’s those unconstrained ideas that jump from our brains to pen that surprise even the writer, yet becomes the right idea.

I’m not standing in Winslow, Arizona, but my feet are planted on the historic Honeymoon Trail that begins there. And it includes a girl, my Lord, and an eventual hoard slow trekking to get married. Between here and there, and beyond me into St. George, Utah expands a vast arid land settled by the Latter Day Saints, the Mormon Pioneers. The Honeymoon Trail led from outlying settlements of the Little Colorado River to the only Temple in town. You see, to obtain an eternal marriage, Mormons must be sealed in the Temple.

Just as I’m not sure what the Hub’s Puritan ancestors would make of the LDS Church posthumously baptizing them all for a greater heaven than they sought in the Colonies, I’m also not sure about sealing. Something mysterious occurs within the grand white Temple that gleams like a lost tooth in a stark red landscape of carved sandstone. I’m not keen on the polygamy, which still exists within the modern FLDS (Fundamental Latter Day Saints) where girls are married to old men and boys are considered competition, thus once of age they are escorted with only a home-school education to St. George and dumped at the Catholic Church social services like a litter of unwanted puppies.

But show me a religion unflawed. We can’t single out one without noting them all.

Belief is powerful. Belief in God is undeniable in those willing to settle the desert and practice the freedom of expression they were denied elsewhere. And how can anyone stand on the Honeymoon Trail as it drifts off into swells and washes beneath a sunset of carnival glass without pondering one’s existence and that of a creator God? When we step off that corner in Winslow, Arizona and try to meet the girl we realize that first-love is no easier to grasp than colors in the sky. Yet, like addicts, once smitten we try to recapture the moment.

My drug of choice is the land. Slowly I inhale dust and sage and sunset. I absorb the wash of magenta-lavender-gold light. The nothingness I hear plays like an orchestra as vast as the horizon, my heart thrumming like water that flows underground in hidden hollows. My eyes blur and ghosts come out to dance lightly among sagebrush and cactus with spines so fresh the plants look fuzzy. The sun dips and my hit subsides but the good vibe lingers. I could stand here on the Honeymoon Trail until coyotes yip and stars out-twinkle a Swarovski tiara.

Alas, my honeymoon is over.

The Hub is agitated and impatient to drive out of this land. If I said nothing, he’d drive and drive and drive. But he married an outspoken woman and unlike those who followed men to the Temple, I protest. Perhaps other women on this trail protested, too. Many believed the promises of Brigham Young, others believed in a better life. Nonetheless they all believed a Temple marriage was worth the hundreds of miles of this trail past poison water, the mouth of the Grand Canyon itself and dangers of the desert. I can’t imagine the Hub persisting across this expanse with a wagon and mule. He’s too impatient, but he’s my impatient partner and he tolerates my quirks and annoyances.

The day he came home and told me his therapist said I was outspoken I snorted and said, “Better than silent.” I don’t believe it was an insult. It was said in context of encouraging the Hub to express his own views separate from mine. Which I see he has no problem expressing. He’s outspoken, too. I’m sure, had we made the Honeymoon Trail trek 150 years ago, the silence of the desert would have echoed our voices from camp to camp. He’s a warrior; I’m a fighter. And we both survive. We do more than that. We laugh raucously and share a love of land, each other and our children.

When do you know the honeymoon is over?

I think of Mary Greene wooing Cobb McCanles in North Carolina where fresh water tumbled coolly over granitic rocks and steep mountains hid beneath a deciduous forest. A fun game it must have been, the excitement of the chase, the power, feeling alive to pursue a man who left the other girls tongue-tied. And they were girls. Mary was 14 when she first saw Cobb shirtless in the glen, riding his steed. Sarah was 13. By the following February, after the harvest dances, Christmas and in time for the early mapling, Mary was 15 and married. At 16, she gave birth to their first son. At 17, her mother died. At 18, she bore a second son, at 19 a third.

The honeymoon was definitely over by the time she was 22, Cobb was elected Sheriff his second term and their fourth son was born. Imagine being 22 years old with no mother, a husband on duty out of the house and often on the trail, and four children under the age of five. And then you hear another is pregnant by your own spouse. Such was Mary’s life in 1856. Counting back the months, Mary forgave Cobb by Christmas. Nine months later she bore a daughter, a difficult birth that nearly killed them both. What might have torn apart other couples, Mary and Cobb seemed agreed on giving their “blue baby” a chance at life. In an age where no one would have questioned the baby dying from a failure to thrive, Mary and Cobb nurtured their daughter who would retain developmental issues and blindness her whole life.

We never achieve the honeymoon again perhaps because it’s a mythical period of expectation exaggerated by a chemical rush of hormones. Maybe the Mormon coupes seeking their eternal marriage forged a stronger foundation for partnership, sharing the arduous journey of the Honeymoon Trail. Maybe they shrugged off the exhaustion of the trail as sunsets offered promise evening after evening until the white Temple rose into view. Maybe they spoke of hopes and dreams. Maybe they held hands and shared each others’ fears. Maybe a few were outspoken. Maybe a few men welcomed a spirited woman, recognizing marraige in such a place would be a daily battle.

March 9, 2017 prompt: In 99 words (no more, no less) write a honeymoon story. It can be between a couple before, during or after the honeymoon. Or it can refer to a honeymoon period. Go where the prompt leads.

Respond by March 14, 2017 to be included in the compilation (published March 15). Rules are here. All writers are welcome!

Under a Honey Moon (from Rock Creek) by Charli MIlls

Cobb fiddled for the Christmas festivities, his gaze lingering always on Mary. How long had it been since her husband looked at her like under a couple’s honey moon?

After the final reel, Cobb spoke to his father before joining Mary.  James returned with a rocking chair and set it in front of her. Its hickory gleamed dark and gold. James was renowned for his craftsmanship.

“Oh!” Mary sunk into the smooth seat, rocking silently. She smiled up at father and son.

James clapped Cobb’s shoulder. “My son made that for you.”

By Charli Mills in Flash Fiction Challenge on March 10, 2017.
← Out of the Fire A Class of Raw Literature →