Essay by D. Avery, prolific Ranch Hand, rowdy Range Writer and author of “Chicken Shift” and “For the Girls.”

Menus now have asterisked warnings regarding the consumption of underdone meat or fish. Raw usually comes with a warning. What about literature? Is underdone the opposite of done well? That is the question that gets rarefied consideration at Carrot Ranch. The consensus seems to be that some like it raw, despite the risks.

Every week at Carrot Ranch Charli Mills presents a flash fiction challenge, the prompt having bubbled up from her experiences and musings on her “enchanted” life. Just as she makes the most of her situation, we make the most of the prompts and “go where it leads”. Though all my responses have been fiction, I have often been led back home by these prompts to get inspiration. And as I read the essays on raw literature and try to mull over that concept, I am again led back to a time when rare meat was not questioned and when you could still get raw milk. 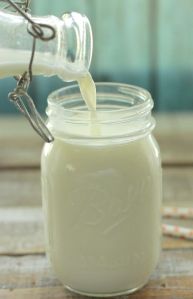 A half-mile up the dirt road, our nearest neighbors kept a milk cow in addition to the beef steer that most of us kept, a friendly little Jersey who produced more than they could consume. So I would walk with the dollar in my pocket and an empty glass gallon jug to exchange for a full jug of raw milk.

Drinking raw milk was an acquired taste, and friends that were only used to store-bought milk generally were skeptical, having to be dared to drink up, especially if they imagined seeing a cow hair or two. Their homogenized, pasteurized milk paled in comparison; in color, in taste, and in associations. This raw milk was not the paper white of modern homogenized milk; it was a light cream color, yellowish. It settled into rich strata with the thick cream rising to the top. Occasionally we made butter. Usually we just shook the jug vigorously to mix up the layers before pouring a glass of frothy headed milk. And if there was hair on the glass, it didn’t matter, it was from a creature that I knew fairly well; I knew her being milked, patiently chewing her feed, switching her tail as Ken, using colorful language in soothing tones, squeezed and talked, the pail steadied between his feet gradually filling as he filled my head with his stories.

My milk route was a road cradled by woods with stories to tell too, stories of long ago times still marked by old stone walls and cellar holes from when all was field and farmland. In early summer I would be distracted by roadside toads or newts and the muddied condensation on the bottom of the jug in our fridge showed that I had set it down in the gravel dust to watch them for a bit. In the winter I would slide down the hill that began the walk then use the sled to transport the milk on the return trip. I monitored the milk levels of the jug in our fridge, noting when I might make the trip again.

Now I make a weekly trip to Carrot Ranch. The writing that is gathered there is rich and flavorful, like raw milk. It is filled with associations and connections, showing evidence of its origins and of its journeys. It is not a pale, thin, over-processed liquid in standardized opaque plastic containers, overstocked on refrigerated shelves. And if it’s raw, perhaps underdone, that’s far more filling than undone. The whole experience of writing and reading at the Ranch is nourishing and enriching, from gathering and consuming and to simply sharing our raw products with each other. Raise your glass.

D. Avery has long been a compulsive poet. Despite a very important day job educating public school children, she is often distracted by this compulsion, as well as by life’s great questions, such as “Kayak, or bike?” Influenced by sights and smells observed from the bike saddle, her first book of poems, Chicken Shift, began as tales of roadkill, but developed into a philosophical inquiry and explanation of why chickens cross roads. Her second book of poetry, For the Girls, was the result of over exposure to breast cancer.

Recently, D. Avery simultaneously discovered the internet and flash fiction, and is using both to flex her writing muscle. Her debut blog, Shiftnshake, has not yet catapulted her into literary renown. Follow her on Amazon.com and Twitter @DSlaytonAvery.

By Charli Mills in Raw Literature on May 30, 2017.
← May 25: Flash Fiction Challenge Gather the Longhorns →