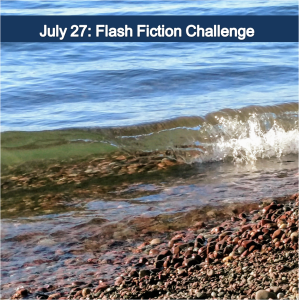 Crystalline waves slap behind my knees. A copper sun sinks slowly toward the horizon, extending sunset from about 8 to 10 p.m. The best time to catch the waves at Calumet Water Works, a public park and beach on Lake Superior, is around 7. If the waves roll just right, they act as a lens to the tumbled rock beneath the surface of clear water that has not a trace of sediment, algae or vegetation. Pure water, fresh water from ancient and icy depths.

Agates bring me here like a junkie looking for a hit. Just one more rock.

Beachcombers walk the long evening in either direction: dogs stroll and children in rubber boots and neon swimsuits dart along the shore like tropical fish. Serious rock-hounds lug buckets and agate scoopers, quickly scanning the wave-saturated edges for glints of agates among the red and black basalt, broken and tumbled smooth into goose eggs. The agates and other stones of interest are marble-sized or smaller, each year decreasing in population. Agates have no mating cycle in geology.

How to find an agate: go to where they are found and look. Rock-hounds can’t tell you how to develop an eye for them, but you can learn tips: look for luster, look for quartz. What does that mean exactly? If you were in your yoga pants and rock shoes, and me in mine, we’d go to the edge together and I’d pick up several rocks of white to show you — this is dull, like a teacher’s stub of chalk. It’s limestone. But it could be chert if it’s glassier, like this one. See? That’s luster. Chert is silica, but fine grained and opaque.

See that one, glinting white as a wave recedes? That’s nice. No, not gneiss… I mean, it’s nice and all, pretty, but it’s not that secondary metamorphic rock. Let me see. Hmm, yes, it’s a granite, has quartz but that’s not the quartz we’re looking for. The shiny you see is mica. It’s a mineral that forms in flakes. The black spots are hornblend. Sometimes you can see pink crystal faces and that’s feldspar. This is granite. Not gneiss, not schist. Don’t take schist for granite.

Ah, here’s a possibility, a white robin’s egg just rolled up with that wave. Catch it before it rolls back down! Let’s look at it. Nope. Toss it back it’s calcite. Lots of calcite and zeolites on this beach. They are silica, too. Quartz is silica. Different heat and pressure results in different grains (crystals) or lack of them, smooth like glass. Calcite is softer and has less luster than quartz. Here’s one: see how translucent it is? If we were lucky and this were an agate you would see distinct rings or bands. I found one white agate with a delicate banded eye of apricot. Exquisite but the size of my thumbnail.

My daughter — she picked up this massive caramel agate of banded chert the size of a fat fig. She’s got an eye. She and her hubby also have matching geology degrees. He has his masters. Seems like the more a geologist masters the more he says, maybe. As in, maybe that’s Thompsonite. I find lots of pretty maybes that glow when wet but dull when dry. Kind of like writing — when it’s fresh with wet ink it’s an agate of a scene. Dry it becomes a maybe page.

We’ve only learned about luster, quartz and white rocks to look for tonight. I forgot to mention that you should look for odd shapes, the not-quite-marbles. If dull they could be fossilized limestone of honeycomb coral. I have a terrific eye for fossils, maybe because I rock-hounded on Mars and in Nevada and Montana where inland seas left fossilized coral beds. I once found a coral fossil the size of a economy car. A gold mining company had left it behind in an abandoned pit because fossils aren’t currency.

The Industrial Age drove the copper miners to seek the webs of shiny copper formed in and on quartz of the Keweenaw. They dug deep and long, mining since the Cliff Mine founded in 1836. No one can say for certain why the copper formed here. Perhaps alien spiders spewing webs of copper or God’s game of where-did-the-Almighty-hide-that-mineral? Junkies have come to this beach before me, looking to get a rush from the naturally sluiced rocks found here, chasing down their origins.

Rock-hounds say the motherlode of agate is off the shore and if you’re serious you should buy scuba gear. I’m tempted. Maybe I can snorkel. Oh, look — this one is covered in fiery copper strands as thin as silk, the color of the last spill of molten metal from the sun on water. The copper is subtle. It’s hard to say what to look for; hard to say what to write. But the more you show up to the beach and the page, the better your chances of finding a crystalline wonder. Develop your eye for it. And don’t mind the slap of cold waves or the constant grind of rocks. It’s natural.

July 27, 2017 prompt: In 99 words (no more, no less) write a story using the word crystalline. It can be used in typical forms or in creative ways (like the name of a town). What meaning does it hold for the story or character(s)? Go where the prompt leads!

Respond by August 1, 2017 to be included in the compilation (published August 2). Rules are here. All writers are welcome!

Clearly a Party Site (from Miracle of Ducks) by Charli Mills

Danni crouched and considered the crystalline structure of the rock in her hand. The lab had scoured Kansas clay from its coarse features. Pink. Granite. Not the Woodland sandstone hearth she had expected to find at this depth. What did it mean? She glanced at the identified bones – beaver, deer, elk.

“Dr. Gordon?” One of the Lawrence students approached, sweaty after a humid day of trowel-work. “Wanted to invite you to a pig roast this weekend.”

“Yeah, my uncle’s a pit-master”

“A pit…It’s a pit not a hearth! Ha! We’ve discovered a thousand year old BBQ site!”

By Charli Mills in Flash Fiction Challenge on July 28, 2017.
← All About the Pie Crystalline →