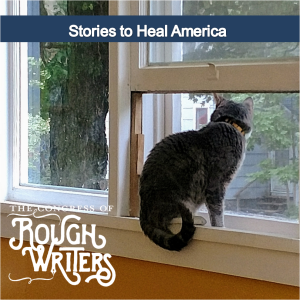 How idealistic is it to expect writers to craft stories to heal America? Yet, the role of literary art is to provide value. Sometimes the value of a story provides escape. and other times it provides meaning. At the heart of literary merit is exploration — the attempt to write something that accomplishes a tall order, such as healing a nation struggling with an identity crisis.

To heal America is to accept different perspectives, to listen to different narratives. This collection provides a breadth and depth of variety in its responses.

The Meeting by D. Avery

Driving to the meeting, he was angry when he spied his daughter with that girl. He had forbidden this friendship. He pulled over, anxious.

“Get in the car! Now! I told you to only play with our own kind!”

“Daddy”, she sobbed, “Celia’s cat got hit.” Both girls clung to him, faces tear streaked, begging him to do something.

He bundled the limp cat in the white sheet that he removed from his car. The cat mewed when he lifted it.
“You girls get in the car. Celia, here’s my phone. Have your parents meet us at the vets’.”

In my makeshift hospital, two soldiers lay. One young, one old. One grey, one blue.

“Them Yankees liberated me,” said the Union man, “they said I now had the privilege to fight for my freedom.” He chuckled, “I said ‘where you been the last hun’ed years? I done my fightin’ in these cotton fields.’”

The man sighed, “seems we both stuck fightin’ another man’s war,”

They laughed together as grey and blue uniforms stained red.

Solving Hatred After a Few Beers by Bill Engleson

“Well…” and I can see Joe’s wheels turning, grinding away. Where he sits, he’s got all the answers. “Well, if I was in charge…”

“Of?” another voice asks from the back.

“Like, the President, eh…I’d…line ‘em all up, Nazis, anti-Nazis, the whole shooting match…”

“Joe,” I decide to give him an assist, “You’d hug ‘em all, man, and then insist they hug each other. Help ‘em find their inner pussycat.”

One the God of gods
could not vanquish

The wind was its soul

He championed
At gazes in tiny species
In instances overwhelming

As if we were merely healed
Watching for in the trees

We, The Association of Former First Ladies, feel your pain. We too have forced a smile when all we hold dear is demolished around us. And not, we might add, beneath a hood and shapeless shift, but in a designer dress destined to be picked apart by the tabloids the following day with greater gusto than they devote to our minds. We too have stood aside, abandoned careers to champion those of lesser individuals (in our case, our husbands’). We offered you Hillary; sadly, you declined. Just asking, but would you consider Michelle next time?

Give Us a Housewife by Irene Waters

The cat flew across the room at the end of Donald’s boot. Maggie hugged her tightly.

“Mum” she screamed. Her mother appeared wiping floury hands onto her apron.

“What’s going on.” She listened. Both children talked, airing their grievances. As the tirade petered out she indicated they should sit. “We’re different yet the same. Let’s communicate, listen and learn. Let’s aim for a home of peace, love and acceptance. Without sanctions that don’t work. Silently she gave thanks for her ban of guns. Donald acted without thinking. They talked. Even Donald listened and learnt.

Betsy hugged the cat waiting for food on her mother’s kitchen counter. A great mouser, the light brown feline showed up in their barn seven years before, another animal displaced when half the country died.

She’d read about the week-long war in history books; how God saved the constitution by commanding, “This is civil war. Kill anyone who is trying to kill the US constitution.”

“Tell me the story again, Mommy!”

“We walked out of our homes, killing every communist and every socialist on every block at the same time. That’s how the USA became a peaceful nation again.”

What’s the Difference? by Norah Colvin

She dumped the toys on the floor, then proceeded to arrange and rearrange them in groups. The largest group was of bears, a smaller group of cats, a few lizards, two puppies and an assortment of singles. With a finger tapping her cheek, she surveyed them. First, she dismantled the group of bears muttering about bows, hats and vests. She hugged Tiger as she separated all the toys. Then Dad appeared with his briefcase.

“Which one to take?”

Mim knew that being a ‘Cat Lady’ was her important mission.
She had made sure the strays were healthy and spayed.
Alternating Tuesdays in Mim’s sun room anyone who came,
could sit the large antique wicker chair and wait until the right
cat adopted them.

Mim’s Kits were at home in The Post Office, Library and
Hospital which allowed a large ginger to roam the floor and
bring comfort where death was a frequent visitor. Mim
believed that one of her Calico’s purring had brought luck
and life to back to little Susie when all other remedies had
failed.

The air reeks of disgust.

The news on the cell-phones beep of minute-by-minute details of macabre killings.

and no prize for guessing.

hand that waters it,” sighs the silver-head wisdom.

“Any nation to be great has to plant peace in its back-yard.”

Erin slid dark glasses on her nose. “Lyla, do you think we’ll be blinded?”

The crowd in Unity Park jostled at street vendors. Everyone sported glasses or viewing devices, everyone except a family huddled together on the fringe. They whispered among themselves, heads close together, three young children in odd clothing.

Erin pulled away from Lyla’s grip. “Just a second.” She cleared her throat. “Excuse me. Would you like to share my glasses when the time comes? We can take turns.”

Breaching the Gap by Robbie Cheadle

The children in the car were laughing as they guzzled chicken pops and drank large Cokes.

It was the last day of school and the children were gleefully looking forward to the holiday.

From his position on his mother’s back, a pair of luminous, dark eyes watched through the window. There would be no holiday for him as his Mother continued her daily toil to put food in their bellies.

The children were oblivious of his stare. All except for one boy.

He opened his window and handed his food and drink to the toddler.

Both smiled with pleasure.

Meditation with a Purring Cat by Liz Husebye Hartmann

I can’t heal the world, not on my own. Can’t heal America, can’t do much beyond my own limited vision.
And yet…

I’ve seen the wave, the one that comes from:
• People in positions of power. They gather together and crest “No, we won’t.” And then roll away.
• The sheltering night. Removing symbols of hatred, knowing history is not forgotten, but enriched.
• The light of day. Behind the Deli counter, hands folded, back strong, she meet arrogance with dignity.

Their cool balance calls me to speak up.

Her family needs that job.

We need her Family.

It’s six fifteen on Tuesday and the regulars sit in the courtyard under the shadows of the monuments. They talk politics with removed passion. Some chain smoke and slug down the stale coffee. Others stare at their feet.

They are black and white. Old and young. Male and female because needles care not about such things. Prestige and privilege only go so far when it comes to a fix.

They don’t show up to be cured but to manage. To do…something…to find the strength between meetings. To nod and stare and not be alone.

Because sometimes, that is enough.

Modern American Culture, lecture one, and I was seated eager beaver to learn. Professor Trumpet strode arrogantly to the lectern, his cat, Donald, under his arm. “Make America great again,” he announced. “Now, how to do it.”

The next forty minutes he regaled us with stories of American greatness from inventions to statesmen to reasons why America was the greatest country on Earth.

All the while Donald the cat, who had the look of a sad dictator about him, watched dispassionately from the desk beside him.

“We don’t have to make America great again,” he announced,” we already are.”

“Move your car!” Stan yells from his porch. Viola ignores him, dropping off kale for her friend.

Finished with her garden deliveries, Viola drives to the vigil. She’s expecting the liberal-minded to light candles for Charlottesville. Solidarity. As the wife of an Iranian grad-student in a small American college town, she misses urban diversity.

Viola’s eyes sting when she sees Stan hobble from his neighbor’s Dodge, both lighting candles. “Glad you both came.”

Jesse put up the flag on his porch every morning. He was a WWII veteran and was proud of the flag, his service, and every day he wanted to show that pride by displaying old glory. He also said a short prayer for all of the deployed men and women all over the world still fighting for those ideals.

Two small boys happened to be riding by on their bikes and stopped to watch the old man raise the flag. One boy spoke up, “Glad you’re putting your flag up, mister. My dad thanks you too, all the way from Afghanistan.

Do You Hear Me? by Reena Saxena

Every morning, I decide to free myself of the blogging addiction. And here I am, logged in again, carrying my disappointed self into a make-believe world, where voices are heard.

Sane voices, by and large, remain unheard. Can we speak in a language that the insane understand? Write compelling stories, use popular media like videos and games and be the loudest voice. I need to rid myself of polarized thinking – “I failed, because I am not at the top.”

Keinwen shepherded her third-grade students to the site. Garbage littered the ground. Hateful graffiti marred nearby walls. A pedestal displayed no historic statue, the place of protests. She said. “Let’s get to work.”

Like a vindicating tide, they rushed into the square with scrub brushes and potted plants. They bagged trash and painted a new mural featuring smiles and shaking hands. Keinwen and two other teachers mapped out a path and poured sand. The children placed stones decorated with inspirational phrases, the week’s art project, as a border to the path leading to the place’s new name. “Unity Park.”

Pursuit of Happiness by Diana Nagai

Summer voyagers, using sandals for paddles, drifted down rapids on spectacular floats. Invariably, a voyager would swirl in a jetty. Not to worry, fellow travelers guided errant navigators back into the flow.

Harmonious sounds of “Sorry!” and “Oops!” followed by “No worries!” were heard. Everyone facing danger and surviving with a splash. Notably missing were sounds of “otherness”. All working together in the pursuit of happiness without a care of color or creed.

They witnessed humanity; people giving and receiving apologies along life’s bumpy path, helping those in need, knowing that someday they might need a gentle push.

“Lose somethin’ Kid?”
“Jest reflectin’ at this reflectin’ pool.”
“Kid, I swear, you are greener than frog spit. This ain’t no reflectin’ pool. It’s just a stock pond.”
“I can see myself, so it’s a reflectin’ pool. Look, you’ll see yerself too.”
“Oh yeah… hey Kid, it’s deep.”
“Yep. Shorty oughta call her place Reflection Ranch. People can come here an’, you know…”
“Reflect?”
“Yeah.”
“I reckon they already do. Been some mighty deep conversations goin’ on.”
“Yep, they ain’t been shallow. I’ve had some a my thoughts provoked ‘round here.”
“In a good way?”
“In the best way.”