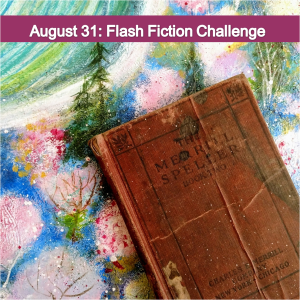 Tapping out the word “g-r-a-m-m-a-r” I recall a teacher’s joke from the past: your Grammer would be appalled at your grammar. The mnemonic humor clung to the idea that one’s grandmother, or “grammer,” would disapprove of misspelling the word grammar. Problem is, with my colloquial western accent, drawled by many California buckaroos, my grandmother was my gramma, thus the joke backfired. It didn’t aid my memory; it confused it.

Every time I see the word grammar, I think the final “a” is incorrect because I think Gramma would be appalled… I personally don’t know anyone who calls their grandmother Grammer. There must be an easier way to recall the spelling of misspellable words.

Poking around an old mining house in Mohawk during an estate sale, I found a 1917 The Merrill Speller. Worn and and claimed by a flowing signature, this education book once belonged to Lawrence Barsky of 211 Gratiot Avenue in Copper City, Michigan. For a silver half dollar, how could I resist? Copper City is a town of 200 people on the Keweenaw Peninsula, near Calumet.

Would I be able to find the student who once doodled a medieval looking B in his speller?

After finding several alternatives of Barske, Barskey and Barke, I almost gave up. Then I found a forum listing a genealogy for a Brisky family from Copper City! Like a misspelled word, I misread the last name (seriously, Lawrence, you should have dotted your “i”).

According to the 1920 Federal Census, Lawrence Brisky was born 6 Aug 1912 in Copper City, Michigan as the youngest of eight children. His parents, John and Veronica, were Croatian immigrants. His mother was 39 years old when she had Lawrence. His father was a trammer in a copper mine. A trammer used brute strength to push the ore carts to the shaft. The mines viewed Eastern Europeans as human beasts of burden. Consider that for a moment.

And then think of young Lawrence, doodling the B in his speller.

Ten years later he was no longer in school. It was the copper mine fate for him. Hid father was dead and his brothers worked the mines. At age 27, Lawrence was far down state from the copper mines. On February 27, 1940 he married Eva Rodosevic. According to the 1940 Federal Census record. Lawrence only complete 7th-grade. He had a machining skill and worked a trade in Detroit, Michigan. He died in 1995 in Tennessee.

Besides the the clear instruction on spelling words like statue (not to confuse with stature or statute), I found the life of a young copper mining boy in a primer at an estate sale. I wonder how the book stayed in Michigan but the man escaped? I wonder how his father died in 1922 while Lawrence was yet in school?

Margaret Meade once said, “Never doubt that a small group of thoughtful, committed citizens can change the world; indeed, it’s the only thing that ever has.” Did copper miners change the world? Most definitely. I’m not sure that’s the change Meade meant. I think she was referring to small groups of like-minded people working together for a common good.

Carrot Ranch is a literary community. It’s my writers platform, but one I created into a sandbox, an imaginary ranch where literary artists can play. It’s open to any writers. The challenges are meant to be fun and safe space to jam with words. It’s intended to be a brief challenge weekly, although writers are welcome to linger. At the heart of this community are The Congress of Rough Writers.

For the next month, there’s an open call for new Rough Writers. What does that mean? If you participate at the Ranch through the writing challenges, your material qualifies for consideration in the literary community’s anthologies. It’s more than a round up of responses; it includes new and varied creative writing. The Rough Writers share their books, blogs and writing through the platform at Carrot Ranch. It’s a way to co-create greater visibility for community writers and for community readers to discover new authors.

Want to be an official Rough Writer? Send me, the Lead Buckaroo, your interest through email: wordsforpeople@gmail.com. I’ll answer questions and let you know what comes next. I’ll be updating the Rough Writer page and others throughout September. The only requirement is that you have been writing here as that’s the material we use to build our anthologies.

In November (date yet to be determined) Carrot Ranch will publish the Rough Writer’s first anthology, Vol. 1. In anticipation of the book launch, Carrot Ranch will host a Flash Fiction Rodeo during the month of October with eight different writing contests. I’m looking for eight leaders to create a fun and unique contest prompt and create small teams of three (leader included) to judge each contest. Got an idea? Send me an email: wordsforpeople@gmail.com. I’ll give you more details on what to expect as far as commitment.

On October 3, the complete Rodeo line-up will publish. We’ll post our last flash fiction compilation on October 4. The challenges and essays will take a break in October, replaced by a contest each Thursday and Tuesday, starting October 5 and ending October 31. Winners and compilations for each of the eight contests will be revealed every Tuesday, beginning November 7 through January 2 when the All Around Flash Fiction Champion is announced.

Winners and a selection of runner ups will be included in the Rough Writer Anthology Vol. 2. The community will begin developing the second anthology in January. The idea is to continue to host a Rodeo each October and launch a book in November.

Flash fiction challenges will continue to be the anchor event at Carrot Ranch. It gives writers a fun outlet, serves as a safe space to explore and share writing, create visibility for community literature and generate material for collaborative projects. If you want to engage in the community but you don’t want to commit to being a Rough Writer or you are one of our lovely readers, you can still contribute. Have a prompt idea? Challenge the buckaroo! Send me an email: wordsforpeople@gmail.com with your weekly flash fiction challenge prompt. Any time I use a prompt from the community, the contributor will earn a prize — it might be a book; it might be a rock; it will be fun!

Now is the time to get your grammar sorted out and saddle up to ride at the Ranch!

August 31, 2017 prompt: In 99 words (no more, no less) write a story that includes a speller. It can be one who spells or a primer like Lawrence once had. You can deviate from the primary meaning if magic catches your imagination. Go where the prompt leads.

Respond by September 5, 2017 to be included in the compilation (published September 6). Rules are here. All writers are welcome!

Note Pinned to a Copper Mine by Charli Mills

“…tract. The word is contract, Father.”

John followed the word with his finger, stating, “Contract.”

“Good! Not to be confused with contact. That means to get in touch with.”

John tousled his son’s dark hair. “When did you get so smart?”

Lawrence beamed a smile, one of his front primary teeth missing. “Since you bought me this Speller!” He held up the brown cloth covered book.

John nodded. “ I need you to help me read more.”

Lawrence nodded and continued, “…contract required for trammers or we strike.”