Raw Literature: The Power of Words 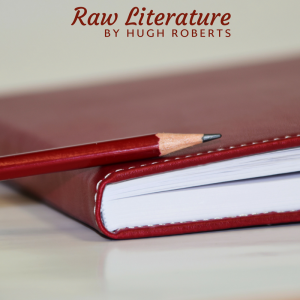 November 2017 found me in a panic. A popular feature on my blog was coming to an end, and I had to replace it with something not only I would enjoy writing, but what my readers would enjoy reading.

Nothing unusual met my eyes. Empty clothes hangers hang neatly in a row but, when my eyes were drawn to the bottom of the wardrobe, my heart sunk when I realised that the last remaining box from our house move of April 2016 still needed unpacking. I could have sworn everything had been unpacked, yet this box seemed to have escaped.

Of course, I could have left unpacking the final box until another day but that feeling I’d had when about to close the wardrobe door suddenly came back to me, and I pulled the box out and pulled off its lid.

Nothing interesting seemed to be inside the box. In fact, I wondered why all the stuff in it had not been taken to the charity shop before we had moved. It wasn’t until I came to the last few items that the power of a word came rushing towards me. It was nothing special, just my name ‘HUGH’ handwritten across the cover of a burgundy coloured book. However, as soon as I picked the book up, I knew instantly that the panic I was having earlier about finding a new feature for my blog had come to an end.

As soon as I open the book, I realised that what I had come across was my diary from the year 1988. I read the first few entries before taking the diary to my study and started to scribble down a few ideas. By the time I sat down to dinner that evening, a new feature for my blog had been born.

The following day, I emailed over 40 authors, writers, and bloggers asking if they would like to participate in a brand-new feature I had planned for 2018. All they had to do, for now, was to choose a random date and a favourite song from the 1980s. As the replies came in, I continued to read the diary.

On January 10th, 2018, the first post of my brand-new feature was published on my blog. It included the diary entry from a date, chosen by one of my guests, details of their favourite song from the 1980s, and an introduction to my guest, their blog, books, and links to their social media accounts and author pages. However, as the series moved on, strange things started to happen.

As I prepared the following week’s post, memories came flooding back to me as I read the next entry in the diary. Not unusual, you may think, but what did become unusual was that I started having dreams about some of the memories and, sometimes, could actually ‘feel’ and experience the same feelings I had once gone through over 40 years ago. I’d wake up and, for a few moments, think I was actually back in 1988. Faces of people I had not seen for over 40 years became vivid in my mind. I could even remember some of their smiles and what they sounded like when talking. In one case, where I’d gone through a particular spell of jealousy, I woke up feeling exactly the same as I did during some of those days in 1988. It was a dreadful feeling that I struggled to shake off.

I’ve never really considered the power words can have on us but reading my diary from 40 years ago has completely changed my mind on how powerful they can be. Yes, we can read or hear a news headline that will have some effect on us, but I’ve never experienced the intensity of the power that words can have until I started reading the diary I found that November day.

I may only be a few months into reading my diary and sharing snippets from it on my blog, but I’ve gone through many strong emotions in a short space of time and, unusually, even while being asleep. It never occurred to me, when I sat each evening writing about my day’s events, that 30 years into my future those very words I was writing would not only enable me to travel back in time and experience events and emotions again but that they would solve a problem I would be panicking about 29 years later. Even the comments left on some of the posts from the feature tell me that some of my readers are also experiencing the power that words can have.

Even though many of the entries in the diary are short, they can certainly pack a punch. It’s the same with the 99-word flash fiction challenge Charli challenges us to every week. You may only be allowed to use no more or no less than 99 words, but some of the stories I have read that have been created out of those challenges have been powerful and have remained with me for weeks after reading them.

You can read the first entry from my diary by clicking here. I also had the fantastic pleasure of having Charli Mills as my one of my guests in week four of the series. The feature, which I have called ‘49 Days in 1988’ will be running until the end of the year. Click here to read the post that Charli featured in.

Have you ever experienced the power of words? I’d love to hear how ‘words’ and/or your writing help you.

Hugh W. Roberts lives in the city of Swansea, South Wales, in the United Kingdom. He shares his life with his civil-partner, John, and their Cardigan Welsh Corgis, Toby, and Austin.

He has always enjoyed writing even though he suffers from a mild form of dyslexia. However, he’s never allowed being dyslexic stop him from having a positive outlook on life. Shortly after retiring, Hugh thought it about time he let his writing become public. Becoming a blogger seemed to be the perfect way for him to do this.

He started writing short stories at school but was never encouraged to continue writing them. In February 2014, when he discovered blogging, he wrote and published several short stories on my blog. They soon became hits, and Hugh was encouraged by some of his readers to publish some of the stories in a book. Now, finally, his dream of becoming a published author has come true with the publication of ‘Glimpses’ the first volume of 28 of his short stories. If, like Hugh, you enjoy shows such as ‘The Twilight Zone’ and Tales Of The Unexpected,’ then his short stories will hopefully take you on plenty of twists and turns to unexpected endings.

‘Glimpses’ is available to buy on Amazon and has already received excellent reviews. Hugh is now in the process of writing a second volume of short stories which he hopes to publish by the end of 2018. If you decide to buy and read Glimpses, then he’d be delighted if you would consider leaving a review on Amazon. Reviews help all authors and feedback is vital to improving writing.

Hugh’s blog covers a number of subjects, the most popular of which are his blogging tips and social media tips posts. He is a keen photographer and enjoys helping to promote other authors and writers on his blog. Despite considering himself to be an introvert, he also considers himself as a ‘peoples’ person. Please do feel free to contact him via his blog.

Raw Literature posts as an ongoing conversation about those first works we create as writers, as literary artists. Guest Authors share personal insights on their craft, its process, the experience of creating raw literature and what they do with it. Carrot Ranch is a dynamic literary community that creates raw literature weekly in the form of flash fiction (99-word stories). If you have an essay idea, pitch to Charli Mills, Lead Buckaroo, at wordsforpeople@gmail.com.