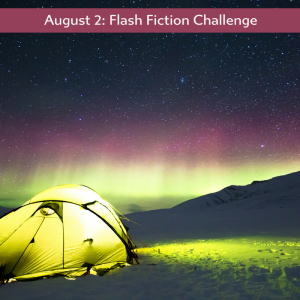 Monty sits on what remains of Cynthia’s deck in Ripley. Much of the rubble from the landslide remains, and yet life boldly rises. The apple tree uprooted and hanging over the fury of water that flooded Ripley Creek after the mountain slid, grows like a tree from a fantasy novel out of the gray and green rocks. Apples hang heavy in its branches.

A clump of roses takes root in a barren patch of dirt and kale spreads like weeds. Milkweed, nectar to butterflies, protrudes in clusters, tall green and promising to flower. A daylily nods its orange head by the deck. Purselane spreads across the rocky ground like nature’s band-aid.

I watch the Hub pet Monty, Cynthia’s charming rescue dog, a Daschund. He’s sitting down, which is good. Typically, the Hub would be gnashing his teeth at the pain in his knee, but he tells me the gel shot he got on Mondy is working. He’s tired, and no shot will take away the instability of both his knees.

The Hub gave us a big scare on Tuesday, ending up in an emergency room. His VA doctor offered to drive him after determining his blood pressure was through the roof. The day before, when he got the shot, the nurse raised the alarm over his dangerously high blood pressure, but he told her she measured it wrong. He can be surly to deal with in such circumstances.

On Tuesday we went to the local clinic for a weekly visit. Afterward, he wanted to see the Marine nurse he likes. I like her, too. She fights for him to get the care I’m fighting for him to get. She and his primary care doctor are the best. But often the referrals they make get denied by the VA. Slogging through the system is never easy.

I returned home to conduct a phone interview for a profile I’m writing, so the Hub drove back. He asked the Marine nurse to take his blood pressure because she does it right. She said it was THAT high. The doc came in, and both told him he needed to go to the emergency room immediately.

When his calls came through to me, I was on another call — the DVIBC had called me back, and it wasn’t a call I could miss, so I ignored his. He only told me he wanted to “talk” to the Marine nurse. I didn’t know he was checking up on his blood pressure. Or that he was in crisis.

I was managing the ongoing crisis — the Hub’s head. We’ve been down a scary path of weakening executive function over the past eight years. When it got bad, I pestered him to get seen for PTSD. I didn’t know what else it could be. His family and friends always talked about how changed he was after service, and I knew his quirks and moments when I’d call him out as “Sgt. Mills” because of his intensity.

But these past few years have been crisis hell. I couldn’t understand why, when we lost our rental two months before we could get into our next one, that he’d insist on going into the wilderness. I’m still traumatized by the experience. That’s when I started fighting hard as I ever have to get him into the VA. Before it was his knees. This time it was his shifts in thinking and behavior.

The VA had no trouble diagnosing him with combat anxiety even 33 years after the event. But he wouldn’t stay put. Next, we were off like a rocket to Mars (southern Utah) because it was a chance for him to get back into his aviation career which he loved. But he couldn’t do it. He was fired for PTSD symptoms.

That’s when I got scared. My husband was not acting like my husband and yet he couldn’t see it. I grieved terribly. I felt like I lost him, and in many ways, I have. A few widows have put it in perspective for me though — I still have him. It’s a bitter pill. But I charged on, getting him up to Michigan with him resisting the entire way.

Even now, it’s a weekly battle for two therapists and one ready-to-give-up wife to keep him here. I love my new community. I love being close to my eldest and youngest. I love Lake Superior and her tempestuous moods and generous rocks. I love new friends like Cynthia and Cranky. I love what the Red Cross discovered when they came to the Keweenaw — we are an intact community.

The Hub wants to leave. He hates mosquitos. He hates snow. He hates feeling bored, and he hates not being able to connect thoughts. He hates that his knees hurt so bad after years of needing a replacement.

You might notice a difference in attitude, and that’s part of the rub. But still, I fight to get him care. His therapists were the ones to catch on that something more was going on with him. That led to suspicion of traumatic brain injury (TBI). It would take sleuthing the pieces to puzzle out what happened.

We all knew about his hard landing into to combat.

The Hub’s mom got a phone call early in the morning of October 25, 1983, that her son was on his way to Grenada. A determined US president confirmed on television that he deployed US special forces – Navy Seals and Army Rangers – to rescue US medical students on an island that Cubans had fortified to build a runway for Soviet planes. So much for a dairy farmer’s wife to comprehend.

How could she know her son was jumping with a concussion? He didn’t even know.

Less than a week earlier, a fellow Ranger spearheaded the Hub in the face during a soccer game and knocked him out cold. He was ticked off to get pulled from the game. Knocked out cold and that’s all that happened. That’s the culture of “Ranger Tough.” Within days, he was flying in a C-130 to combat.

The Hub jumped with a T-10 parachute which Airborne uses for mass combat jumps. His rate of descent increased with his heavy load — a mortar round and all the communications gear for his unit. He hit so hard he bounced. He hit right knee, hip and head…bounced…hit his head again. He wore an M1 helmet which the Army acknowledges was not designed for impact. He essentially wore no head protection for 174 career jumps.

It would take almost five years for the Hub to realize that the pain in his knee after that jump was from bone fragments and a complete internal derangement of his knee. He had continued to jump, play soccer and rugby, all on a broken knee. That’s the culture of “Ranger Tough.” As much as I’d like to smash that tough attitude, I also recognize that it conforms to his identity.

When we go to the VA, I fight him as much as I fight them. I must be “Ranger Wife Tough.” He’ll ignore pain or report it’s low, then go home and rail about the pain. I won’t go into what it’s like to be married to a veteran, really only other veteran spouses get it, and many of them are exes. It’s not a glorious role.

But I know the Hub is a good man. He’s been a good dad, and I always felt safe with him (up until wilderness homelessness and Mars wanderings). Just as I did when I was raising three children, I ask, “Why this behavior?” Each new puzzle piece comes with a “why.” I keep arranging, searching the scientific studies, reading articles from the National Football League, reaching out to experts, asking for more tests.

We now understand that the Hub’s symptoms at the end of his military service and after he came home were likely due to TBI. PTSD certainly factored in — simply surviving Ranger Battalion required the maximum effort and PTSD is proof that one is a survivor. Another piece of the puzzle was linking his combat dive specialty after Grenada, after a TBI. It compounded the lack of healing.

But the brain can and does heal. The problem is what they call second impact syndrome. After a concussion, the brain releases tau, a protein which destroys more of the brain’s neurons. It leaves the brain vulnerable until it heals. If the brain suffers another impact (even a jolt), more tau is released. This is why repetitive concussions are dangerous. They lead to degenerative brain disease.

It’s why, when a doctor tells the Hub he needs to take the pills to lower his blood pressure, the Hub argues with him that he doesn’t have high blood pressure.

But today was a victory. In therapy with his Vet Center PTSD counselor, he recognized himself in a younger veteran he recently met. The signature wound of Iraq and Afghanistan is TBI. And most soldiers with TBI have PTSD. The VA, once it began to understand the immensity of the problem through recent TBI research, began screening all post-9/11 veterans.

The Hub is pre-9/11. When he came home, his parents wanted help, but no resources existed.

The fact that the Hub could see his own symptoms in another person was a huge moment of clarity. He understood why we were focusing on the two in-patient treatment options we have. He’s agreed to either one that comes through for him. I’m beyond relieved. He’ll have a team of medical and mental health professionals to work with all his issues.

As I watch the Hub pet Monty while talking roofs and walls and how to live in a house with no running water or floors, I feel we are all going to be okay. I feel like it’s a yellow tent moment. We’ve pitched our tents and wait for the stars to come out. My tent is yellow. The color of sunshine and hope.

August 2, 2018, prompt: In 99 words (no more, no less) write a story that includes a yellow tent. Where is it and who does it belong to? Think of how the color adds to the story. Go where the prompt leads.

Respond by August 7, 2018. Use the comment section below to share, read and be social. You may leave a link, pingback or story in the comments.

Wanting to Hide (from Miracle of Ducks) by Charli MIlls

Danni unzipped her tent. Vapors rose from the creek where it meandered smooth and flat across a meadow dotted with daisies. The sun cast colors across the eastern horizon of sharp mountains. She checked each boot, a habit from growing up in Nevada where scorpions liked to take refuge in a cozy shoe. The feel of laced boots gave her confidence to face the day. The volunteers would soon be arriving to camp. Ike had always teased her about how bright yellow her tent was – “Astronauts in space can spot it.” Today, she wished she had his camo tent.