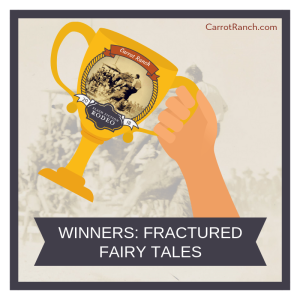 Once upon a time on a virtual ranch,
Was a whole bunch of writers wanting a chance
To fracture a tale in no more and no less
Than 99 words to show who was the best.

The judges were ready, no red pen in sight
And sent out the prompt for writers to write.
In trickled stories one after one
Till time was up and the contest was done.

The judges then read them and read them some more
The stories that numbered ten times four.
They pondered, selected and collaborated
Till agreement was reached on the #1 rated.

Thank you, contestants. We judges, Anne Goodwin, Robbie Cheadle and I, had a wonderful time reading your stories and thank you for submitting them to the Fractured Fairy Tale Contest.

Although many traditional fairy tales begin with ‘Once upon a time’ and conclude with ‘they lived happily ever after’, only one of the stories began, and only two ended in the traditional way (and not one incorporated both). I guess why waste words when you’ve got only 99 with which to play.

The criteria we set wasn’t necessarily easy: to retell a traditional fairy tale with a twist. We said it must include food and we must be able to recognise the story it was based on—all in 99 words.

Overall, responses were excellent with unexpected twists and turns and different interpretations of the original stories, some humorous, some a little dark. Only two stories were disqualified on the word count and two more for not being recognisable fairy tales. All others fitted the criteria giving us judges a tough job to select just one winner.

We were interested to see that a few fairy tales appeared in stories more often than others. Perhaps this was due in part to the requirement to write a recognisable tale as well as to include food in the story. Obviously, it was easier if food was in the original.

We were also pleased to see a modern thread running through the some of the stories. In fact, one of the things we all liked about the winning story was its contemporary feel.

Of the winning story, Anne said,

“This entry excited me from the very first reading in its freshness, yet faithfulness to the original right up to the final delightful twist. The voice is crisp and the pace snappy: a fine achievement in so few words.”

I also appreciated the use of the GPS and the recognisable touch with it taking her in the wrong direction. The name Scarlett, her task, and the wolfish grin all served to make the story recognisable, and the inclusion of takeaway food completed the requirements. All these worked together to make it the winning entry. We hope you agree with us.

In first place is:

It was the end of Scarlett’s long day at her new job when she got a text from her mother:

Grabbing some food from the establishment, Scarlett then plugged Gram’s new address into her GPS and set off in her little red Bug towards The Woods Senior Living Complex.

Yet, despite this, she got lost, making a wrong turn. At a stop light, she saw a handsome young man. She asked for help. Sniffing the aroma, he smiled wolfishly, gave her directions, and then hoofed it to Gram’s for Domino’s deluxe pepperoni and sausage pizza.

Coming a close second is:

Friends of Goldilocks by Hugh W. Roberts. Congratulations, Hugh! (Winner of the ebook, When the Buzz Bombs Fell by Robbie Cheadle and Elsie Hancy Eaton)

Looking in the fridge, Goldilocks was surprised the Bear family had left milk. However, it had turned sour, so she couldn’t make herself a big bowl of porridge to get rid of her hunger pains.

This was pointless, thought Goldilocks, as she got out her mobile phone to check who else had told their Facebook friends they were away.

Sure enough, local food blogger Chris P. Bacon had informed her followers that she was on an overnight food hygiene course.

Perfect. Not only would there be plenty to eat, but Goldilocks could rob the house at the same time.

Of Friends of Goldilocks, Anne said,

I loved the contemporary feel with Facebook used as a central plot device and the subversion of the traditional tale by making Goldilocks a villain. With a few more words – or a bit more time – perhaps the flow could have been a little smoother.

I liked this story because of the modern touches too. I enjoyed the mention of a food blogger in this piece, and I like the fact that Goldie was a robber and her being in the bear’s house was part of a bigger picture with a more sinister undertone.

I liked these aspects too and loved that Goldilocks checked Facebook to see who was away from home—a good caution to anyone who is travelling. The use of the mobile phone and a food blogger bring the familiar story into the 21st century.

In third place is:

The wolf was hungry and needed some action. On his way, he saw a beautiful girl in a straw house.

“I don’t negotiate with terrorists” – were her last words.

Next, the wolf stumbled upon a house made of sticks.

“I don’t negotiate with terrorists” – were her last words.

He salivated at the thought of bacon, looking at a piggie in a brick house.

He repeated his line.

Like a traditional tale, this story makes a virtue of repetition but with a surprise and humorous ending. The opening line, linking hunger with action, left me unsure whether he wanted to eat the girl or have sex with her. Perhaps it was intentional, but it didn’t set the story up for me as clearly as I’d have liked.

This story is not as unique as the first two as the pig gets the better of the wolf but the idea of turning him into a rug was most amusing. I liked the comparison of the destructive wolf with a terrorist.

What I like about this story is that it kept to the same pattern as the original story. Neither of the first two pigs was prepared, but the clever third pig was. While I don’t normally condone violence, I think this is a very fitting conclusion to the story. It took me by surprise, and I laughed. It’s good to see women standing up for themselves and against terrorism—a few good messages rolled into one short story. I think the addition of a title would give readers advance notice of what they will read, but since a title was optional, it couldn’t lose marks for that.

In addition to the three winners, from the stories we all rated highly, we each chose a story for honourable mention.

“Cindy!” The two stepsisters looked at each other. “You gotta give up something if you wanna marry a prince!”

Cindy rolled her eyes, grabbed an apple, and pushed through the kitchen door. “You found my slipper?”

“We’ll see,” Flashing his perfect princely grin, he held out the sparkling shoe.

She took it and slid it on.

She crunched into the apple. “You really are a jerk.”

In the traditional telling, Cinderella has a satisfying plot, but the happy-ever-after ending is ideologically unsound. I really appreciated this feminist version although, for the contest, perhaps the food is too peripheral to the story.

Starving and exhausted, Goldie trudged through the forest scavenging for anything edible when she discovered the house in the woods.

The aroma of freshly cooked sauce filled her nostrils and aroused her taste buds as she spotted three bowls of pasta.

Goldie didn’t hesitate to gobble up all three bowls then headed for the couch for a nap.

Half hour later she awakened to the discomfort of her rumbling, expanding stomach.

“Oh crap,” Goldie exclaimed. “That pasta was not gluten-free!”

I like this story. I thought the usage of the food theme was very good in this particular piece and the pasta not being gluten-free and upsetting Goldie’s stomach is so modern. Everyone I know has allergies, so this is very topical and will strike a chord with a lot of people.

‘Again? Do you builders ever bring good news?’

‘In Fairyland? You’ll want a happy ending next. It’s the gingerbread cladding…’

‘I can’t get any, even with a sack of giant’s beans. You’ll have to make do with carrot or pumpkin.’

‘No way. You heard what happened with that Ella woman?’

‘That’s the one. Her godmother turned the town’s allotment into transport. No one’s changing my house into a veggie vehicle. Where’s the gingerbread gone?’

‘It’s that caterpillar, gone for partially peckish to very hungry and…’ *shrugs

Because this story had no title, it took me a little while to see where it was going, but it all became clear eventually. I like that a variety of different fairy tales and characters have been intertwined to create a plot with a problem. The conclusion, with the inclusion of a very popular and recognisable children’s story, though not a fairy tale, is amusing.

So, thank you to all contestants. We judges had a difficult but enjoyable task in reading all your story. I’ll conclude with a statement from Anne which sums up our thoughts.

Anne Goodwin: I had the impression – and I hope I’m right – that the entrants had tremendous fun crafting these stories, testament to the fairytale genre’s enduring appeal. But I also realised that Norah’s challenge was a lot trickier than it might initially appear. Food plus a recognisable story plus a narrative arc: not so easy to create a new angle in only 99 words.

All qualifying stories entered into the contest are now collected and available to be read under the Rodeo tab Rodeo #4: Fractured Fairy Tales.