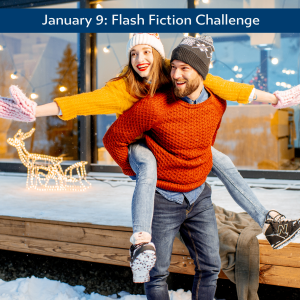 Well, it is finished: Term Two Week Ten. My final grades come out on January 16, and this week, we wrapped up our discussions. My thesis, when accepted, will be a contemporary novel about Danni Gordon who is an archeologist ready to settle down but married to a restless veteran who finds a way back to Iraq. In Advanced Literature, we studied the four primary genres of my MFA program: YA, romance, speculative and contemporary. Our final project was short and creative. We had to write a two-sentence story for each genre to show the differences.

YA: My name is Danni and I’m a Nevada girl who can drive steers, mustangs, and any old Jeep. Before you start thinking that’s all cool, understand that my life is misery, too — my name came up on the teenage ranchhands list at the bunkhouse today and I drew short straw to muck out the calving barn.

Romance: Danni couldn’t resist staring at the way the fisherman’s black tee-shirt stretched across his muscled chest and she could forgive him for walking across her archeology grid. Ike had no idea who the stupendously sexy woman digging in the dirt was, but he could forgive her from distracting him from fly-fishing the rest of the afternoon.

Speculative: With a single brushstroke, Danni uncovered a metallic glint among fragments of Navajo potshards. She kept brushing until days later the outline revealed what archeology had not prepared her to find — an ancient spaceship.

Contemporary: Ike charged her with his knife drawn but the full-body impact came from her left side. She never saw the charging moose her husband took down with a single slash.

Can you spot the differences? YA is a teenaged version of Danni told in the first-person POV and demonstrating a strong narrative voice. Romance focuses on a relationship and famously includes a first meet, and often told from alternating perspectives, which I did but as close third-person POV. Speculative includes spaceships. Contemporary creates verisimilitude through details that put the reader in the story. My biggest takeaway, though, is that no matter our genres of preference to write or read, we all blend genres. What is important to know for the purpose of publication is which genre best describes yours. Do you give this topic much thought or do you write what you write?

I’ve come to decide, for now, at least for we are always evolving, that I write contemporary fiction about the women’s frontiers. Typically I look for stories not being told or forgotten in time. As a researcher, it can be hard to find women in the records at all. Yet, stories have a way of rising to the surface, even ones buried in time.

Today, I took an artist’s date with a friend who claims to be the longest-standing student of Finnish language who still can’t speak it. I admire her attempt — it’s like Nordic Welsh. Hancock (Hankooki) has street signs double posted in English and Finnish, and after two years in the Keweenaw, I’m still no closer to understanding how to say a single word. Still, I appreciate living in a place with strong cultural identity from many sectors. While I originally planned a post inspired by my local Italian neighborhood, I got sidetracked this afternoon at the Finnish Cultural Heritage Center, where my friend and I watched the new documentary, Sirkka, by local filmmaker and Finnish American, Kristin Ojaniemi.

At 99 and a half, Sirkka Tuomi Holm is blind in one eye and can hardly see out the other. Born five days before women had the right to vote in the US, her foreign-born Finnish parents raised her to fight for what is right. She stood on picket lines as a child with the working class, joined the Army as a WAC in WWII, and stood up as a hostile witness under the hysteria of McCarthyism. She writes a column in the Finnish American Reporter monthly and says history will always repeat itself. She should know. She’s lived through it. A veteran and a woman born before the Vote. Yet living, breathing, and showing how the past informs the present.

You can see from the film trailer how easily Sirkka captivated me. She relates a story about her shoes falling apart, repairing them with cardboard. She lived through the Great Depression and remembers the harsh times. A teacher referred her to the school principal for a shoe donation. The principal wrote out a slip for the program, but rather than hand it to Sirkka, she crumpled it and threw it on the ground to make the girl fetch it, saying, “You foreign-born make me sick! Lazy! Your father should be working to provide your shoes.”

Those words echo down through time and find new mouths to spill out from, shaming those who migrate for a better life, enduring poverty and hardships in the transition. Sirkka was shamed but held her gaze directly at the interviewer and said of the principal, “She was a bitch on wheels.” 80-some years later, Sirkka still recalls how that woman made her feel. As writers, that’s what we want to capture no matter the genre and its tropes we write. Readers should walk away from books remembering how the characters made them feel.

As for living history, Sirkka participated in the fight against fascism, aiding D-Day in Normandy. Yet, less than a decade later, she watched fear of communism turn to hysteria. Many Finns, such as Sirkka and her parents, were indeed Red Finns. They maintained their language, love of theater, religion, and politics without any subversive motives. She embraced being American because it meant the freedom to be who you are, speaking out, standing up for justice. The tide turned against her, and McCarthyism left her hating. Then, she realized that hate was making her like those who had wronged her. She loved people and made a choice to dispell hate.

Sirkka has a message for us. She says history will repeat itself, and it’s up to us to remain human. We do that together. She said, “Sing together. Go for walks together.” I’ll add to that — write together.

The debut of Sirkka’s film kicked off the mid-winter festival in Hankooki — Heikinpäivä. In Finland, they say, “The bear rolls over,” meaning winter is halfway over. And here’s how they say it:

Heikinpäivä 2020 includes a stick horse parade, pasties, kick-sledding, and a wife-carrying contest. Little appeals to me in the sport’s origins or modern contest, but it makes locals laugh and cheer the contestants without being as intense as other races. But it got me wondering, as writers are wont to do with strange little tidbits — what other ways and reasons might wives be carried?

January 9, 2019, prompt: In 99 words (no more, no less), write a story about a carried wife. Why is she being carried? Who is carrying? Pick a genre if you’d like and craft a memorable character. Go where the prompt leads!

Respond by January 14, 2019. Use the comment section below to share, read, and be social. You may leave a link, pingback, or story in the comments. If you want to be published in the weekly collection, please use the form.  Rules & Guidelines.

Her black hair sleeked and pinned, Mary Green McCanles rode the Tennessee Walker sidesaddle alongside the wagon train from Carter’s Station. Among the dusty herd and hands, she looked regal and rested. Sarah’s cheeks flushed, and she patted the frizzy sides of her brown hair, feeling like a pale version of Mary. Sarah dimmed when Mary dazzled. Cobb strode from the barn, ignoring the new livestock that just made him the wealthiest man in Nebraska Territory. He swung his wife off the horse and carried to the outburst of cheers. Sarah would have to sleep in the barn tonight.

By Charli Mills in Flash Fiction Challenge on January 10, 2020.
← Found in a Hutch Carried Wives →