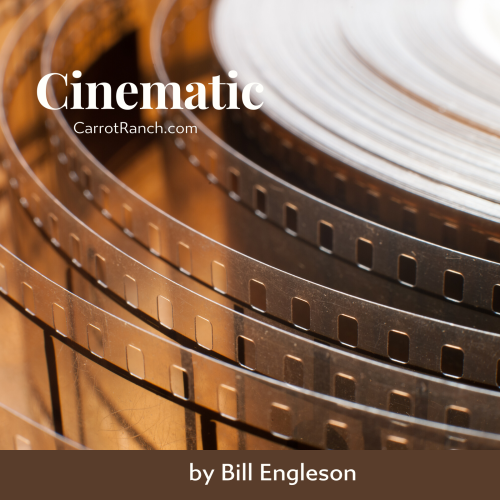 In this series-depending on how long it lasts, for life, writing, and so many other things, are quite fleeting-I hope to look at a few classic films, give my take on them, perhaps even say something new that will have significance for today, and, failing that, try like the devil to be entertainingly provocative. I also hope to post a link or two about/to the films I examine, if available, so that they can be enjoyed (or dismissed) with full access.

When World War 2 ended, most soldiers returned home. Europe at that point was a chaotic caldron of refugees and defeated as well as occupying forces. Most of the refugees were innocent victims dispossessed from their various homelands. Cities had been devastated, many bombed into oblivion. The countryside had not been spared and much good growing soil had been razed by the pointlessness of war, the fields of blood, and the endless battles.

While there are many films that speak about life after the war, including two personal favourites, the multi Academy Award winning The Best Years of Our Lives and a somewhat similar albeit lesser known  film, Till The End of Time, a gem actually released before its cinematic doppelganger, both which follow a set of vets reintegrating into a peacetime America, there were other films that offered a glimpse into something darker, something much more sinister.

In this column, I want to take a peek at two stark little film noirs. Each offers a deep dive into the shadowy world of fugitive war criminals, villains who, of necessity, need to leave their old lives behind and assume a brand-new identity. The two films are the Edward Dmytryk directed 1945 thriller, Cornered, and Orson Welles’ 1946 suspense mystery, The Stranger.

Wars end. Usually. Past lives finish. One horror is over; recovery, the attempt to return to a semblance of normal, begins. So many millions of people dead. By one estimate, 70-85 million souls perished in WW 2. Of the living, many millions, up to 11,000,000, are on the move, homeless, lost.

But there were others, hundreds certainly, perhaps thousands, who were war criminals. They too had been uprooted, compelled to go on the run.

Cornered and The Stranger take a slightly different point of view to unearth, or, more accurately, run to ground war criminals in the aftermath. I have always been drawn to films that get to the heart of recovery from disaster. The social order, once firm and fathomable, has forever changed. No doubt the war caused much disruption but adjustments were made, sacrifices given, losses mounted, and always the prayer that it would it eventually conclude. And then, it did.  First in Europe, then in the East. 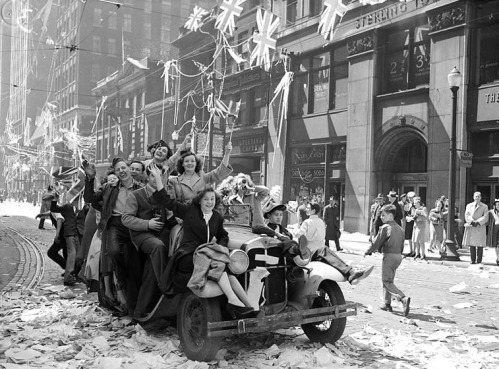 There are also iconic images that capture the mood of war ending and sharing it with the world. This Alfred Eisenstaedt image below is beloved around the world. But it was not all parades and puckering.

Cornered has a heavy-going introduction. Hindered by a bureaucracy that won’t let him return to France in a timely manner to find his young wife’s grave and, possibly, a measure of revenge, the protagonist, Laurence Gerard, rows across the English Channel, scuttles his rowboat, seeks old compatriots in the ruins of France, snarling frequently as he launches his long journey to justice.

Gerard’s quarry is Marcel Jarnac, a Vichy collaborator, a mass-murdering war criminal. Allegedly dead. One of those convenient deaths where some grave doubts about the authenticity of his expiration date exists. In any case, Gerard assumes Jarnac is still alive, journeys to Marseille, then to Berne, and then, as a reward for his superior sleuthing wiles, travels to Buenos Aires. There, seemingly by happenstance, he is approached by travel guide, Melchior Incza. Is he just a guide or something more sinister?

Incza, deliciously, sleazily played by the great character actor, Walter Slezak, worms his way into Gerard’s, if not confidence, then into his orbit.

Incza conveniently drops the name, “Jarnac”. This leads the duo to a hoity toity Buenos Aires soiree where the dangers are both viscerally noirish and not a little sultry.

“A fine party. A fine party, I promise you,” waxes the salivating Incze. “Few people have the talent anymore. My friend, Herman Goering had it, for one. Before the war, of course. Ah, those were parties.”

Girard, played by former song and dance man, Dick Powell, is not a pleasant man, even though he is Canadian. As a Canadian, I find that mildly refreshing. A number of reviews of the film note the darkness that surrounds Powell’s interpretation. He is a post-war poster boy, angry, driven, obsessed with revenge. Powell’s previous film is one of the great noirs, Edward Dmytryk’s, Murder My Sweet. In that film, Powell, playing hard-boiled detective Phillip Marlowe, in a film based on Raymond Chandler’s, Farewell My Lovely, made great strides in proving he had dramatic chops and had outgrown a decade and a half of musical comedy.  In fact, the producers changed the title from Farewell My Lovely to Murder My Sweet because the book title sounded too much  like a romantic comedy.

Welles, The Stranger, begins with a shot of a door opening. There is a sign. Allied War Crimes Commission Dept. 12.

The scene is set. The film, shot sometime late in 1945, is the first to seriously address the evil of concentration camps. Clearly it was as topical as film could be.

The next few scenes get us caught up in the chase. The world is the canvas. The mood of the hunt is as visually ferocious as we saw in Cornered.

Where will we land, we wonder?

After such a noirish journey, we are suddenly thrust into a bright, sunny Connecticut college town. Harper. A bus pulls up and two gentlemen exit. There are numerous suspicious glances. The hunter and the bait. This we know. Inside the local coffee shop/news counter, a brace of locals is positioned.

The hunter, Edward G. Robinson, our Mr. Wilson, busies himself with chitchat. The Bait goes to a telephone. Next to the phone, a hand-written sign implores, “Gentlemen Do not Deface Walls! Use Pad.” A call is made. We immediately understand who the quarry is. Unlike Cornered, where Jarnac is a wisp, an inkling, almost a ghost, Franz Kindler, the quarry in The Stranger, is almost immediately revealed. He is none other than a respected university professor, Charles Rankin. To top it off, on the day our hunter and bait arrive in this most tranquil of academic communities, the Nazi, and not just any Nazi, but an architect of mass-extermination, is about to marry the daughter of a respected Judge. At one point, the Nazi cat is out of the bag though it takes Mr. Wilson a few hours to reach the correct conclusion. In the middle of the night he recalls the point made by Rankin: “Who but a Nazi would deny that Karl Marx was a German because he was a Jew.”

What follows is a grotesque dance of deception, discovery, death, and dénouement.  In other words, fairly common noir results.

The Stranger is a most unsettling film. There is even a film within the film. At one point, Mr. Wilson shows excerpts from the 1945 US War Department documentary, Death Mills. The short bits shown by Wilson are difficult to watch. Even as he shows the film to Loretta Young, playing a bride who is very slow to accept that she has married evil personified, one has to be concerned about the effect on the viewer. I’ve provided the link to the 21 minute doc but be warned.

By most measures of longevity, any Nazi war criminals still not accounted for are probably not amongst the living. A few do pop up cinematically, most frequently as zombies in film of that genre although they do resurface, like JAWS, in more mainstream films.  (*See my seriously, actual last thought comment).

For the curious, Wikipedia has a list of most-wanted Nazi war criminals last updated in 2018.

One of them, Helmut Oberlander, is still in Canada. Oberlander has been ordered deported but apparently the ravages of time are saving him from that order being acted upon.

John Demjanjuk: On a personal note (more of a personal awareness note, I suppose) I became fairly aware of the secret lives of Nazi war criminals all through the 1980’s and 1990’s when the Demjanjuk case occupied a huge slice of the news.

Demjanjuk’s journey to justice, to finally pay his unpayable debt to countess victims, was epic. It literally took decades and even then, he was permitted to spend his final year of life in a nursing home. However, it was not in America where he had lived and prospered for decades. Rather his final year was spent in Germany where he waited, and finally met, the grim reaper.

Valerian Trifa: As I wrote this post, I encountered the name of a war criminal new to me. There are of course many I know nothing about. Trifa, as a younger man, was a propagandist whose words led/assisted in a murderous pogrom against over one hundred Jews. Trifa became a cleric in the Romanian Orthodox Church and after the war, immigrated to the States where, in time, he became Archbishop of the Romanian Orthodox Church in America and Canada. His is a complex story and I’ll leave a link.

Bruno Dey: The day after I completed the post (I thought) it was announced that Bruno Dey, a teenage guard at the Stutthof Concentration Camp had been found guilty of 5232 counts of accessory to murder and one count of accessory to attempted murder. Because of his age at the time he committed the crime, his trial was held in juvenile court in Hamburg. His sentence: two years suspended.

The article mentions a trial for a second guard at Stutthof is in the works.

Though the film is more flavoured with the horrors of eugenic science possibilities and is definitely not noir, I mention it to reflect on how, in the 1970’s, Nazi villains were still alive and kicking. Cinematically, at any rate.

A more noirish film from the seventies’ is 1974’s The Odessa File. Based on a great thriller from Frederick Forsyth, we bear witness to a Third Reich that never gave up, never accepted defeat and that clearly, in 1963, where the film begins just as the world is learning about the assassination of JFK, is planning a comeback.

Fact of fiction, it is a heck of a movie.

Whether post war noir or seventies blockbuster, films that remind us about the capacity of man to commit horrendous acts of evil serve to give us a constant heads up to our responsibility to call out that evil. I think both The Stranger and Cornered represent an earlier post war effort to do that. They certainly are worth a look.

I have provided a you tube link to the full version of The Stranger but only a trailer link to Cornered.

I am a Canadian author with two books, my 2013 novel, Like a Child to Home, and my 2016 collection of humorous literary essays titled Confessions of an Inadvertently Gentrifying Soul.

I write flash fiction, essays, poetry, and reviews and have two larger projects including my first novel’s prequel, Drawn Towards the Sun

By denmaniacs4 in Columns on August 4, 2020.
← Saddle Up Saloon; Interviewin’ the Interviewer Her Crowning Glory →